Way Back Wednesday: The History of The Lost Village of Britannia 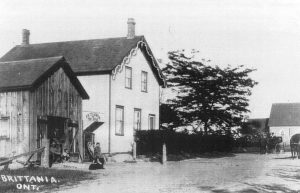 Driving along the busy thoroughfares of Hurontario Street or Britannia Road today, people may not notice the “Welcome to Britannia” road signs. The historic community of Britannia, with only a handful of physical reminders from the past, has become one of our “lost villages” in Mississauga. 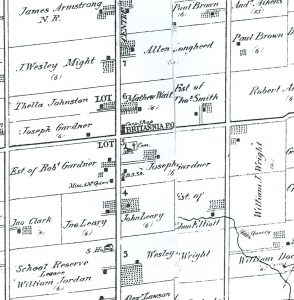 Originally referred to as “Gardner’s Clearing” in 1821, after two Gardner brothers established farms at the crossroads of what is now Britannia Road and Hurontario Street. A travelling Methodist preacher, Cornelius Flummerfelt, recorded a visit here in the spring of 1821. 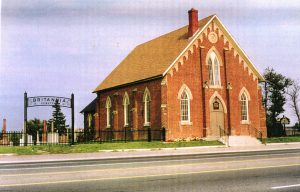 By 1830, many more families had begun to settle around the crossroads, and Joseph Gardner donated the land for a church and graveyard. The church, built in 1843, survives today at the southeast corner of the intersection, although it faces an uncertain future. 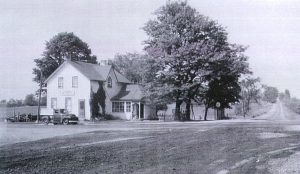 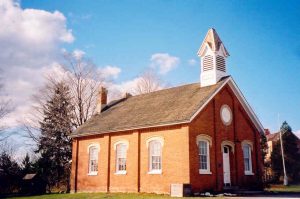 Another surviving reminder of Britannia is the Old Britannia Schoolhouse on the west side of Hurontario Street, just south of Matheson Boulevard. Built in 1852, this schoolhouse served children from the surrounding area until 1959. In 1982 it was restored and today is lovingly cared for by the “Friends of the Schoolhouse” and play’s a significant role in the elementary education in Peel today. Also located on the adjacent farm property surrounding the school is a storey-and-a-half farmhouse, typical of the early Peel landscape, and original to the property. Beside it is a larger Georgian-style house, known as the Gardner-Dunton House, which is believed to have been built in 1840 and was relocated to the current property in 1989. These structures help to root us to a not-so-distant agricultural and rural past.

These are but a few physical remnants of Britannia that survive in modern Mississauga. More valuable still are the rich memories and stories of the community that survive, in no small part due to the efforts of former Britannia residents Marjorie and Ben Madill, who collected, and shared, a treasure trove of memories of their beloved Britannia.

It can be found on their website here: https://www.modernmississauga.com/main/2019/8/7/the-history-of-mississaugas-britannia-road

Welcome to our fifth installment of “Ask a Historian”. Every week Heritage Mississauga will be taking questions about the history and heritage of Mississauga which our Historian, Matthew Wilkinson, will answer on Thursday afternoons. #ApartTogether, Heritage Mississauga is the source for inquiries and curiosity about our beautiful city as we continue our mandate to research,…

In recognition of St. Patrick’s Day we will be exploring some of the historic Irish pubs that are a part of Mississauga’s history and landscape. Minerva’s Bower / Cuchulainn’s Irish Pub 158 Queen Street South, Streetsville United Empire Loyalist John Barnhart built this house around 1832 as a wedding gift for his daughter, Minerva, and…