HAUNTED MISSISSAUGA HERITAGE TOUR is Heritage Mississauga’s annual tradition. Taking place this year on Saturday October 22, at the Streetsville Memorial Cemetery, the Haunted Mississauga Heritage Tour takes you on a guided walk around specific (and appropriately spooky) areas of the city. Haunted Mississauga began back in 2002 with a special lecture featuring late author Terry Boyle (who wrote Haunted Ontario). The initial event’s popularity spurred the creation of the tours, which now feature costumed actors portraying people and events from the past.

The annual Haunted Mississauga cemetery tour is back in-person! This year the story is centred around an 1832 election, and visitors will have a chance to engage with multiple actors who help them to bring history to life in an entertaining and improvisational evening based on real people and events from our past.

This year the story is centred around an 1832 election, and visitors will have a chance to engage with multiple actors who help them to bring history to life in an entertaining and improvisational evening based on real people and events from our past.

The hunt is on for the killer of Noah Eaton, who has been found dead in his home, slain by his own axe laying beside the body. Villagers are appalled that something like this could happen in Malton and are appealing to influential people in their community for something to be done. Testimony from local John Lundy pushes locals to suspect the shady James Hamilton of the crime. One of Malton’s earliest and most influential settler families, the Moores, are attempting to piece together what happened with the help of others in the community, some of which are more helpful than others. In this village of equal parts gossip and moral propriety, not everything is as it seems. Will justice be served? Will the murderer be found? Only those brave enough to journey into the Darker Side of Historic Mississauga will discover the truth. We would like to thank the Ontario Trillium Foundation Resilient Communities Fund for their support which allows us to reimagine programs such as Haunted Mississauga.

This year we will take you on a virtual tour of the Dixie Union Cemetery (c.1809) where you will meet 13 spirits to learn about their lives, and possibly demise, set between 1840 to 1846. There will also be some hidden clues throughout the tour for a prize for the brave and attentive tourist who can correctly answer the following trivia question first: Who was the Worthy Settler? Email your answer to: [email protected] We hope you will join us as we journey to the past for a night of haunted history and some fascinating stories! #ApartTogether Produced & Edited by Kelly Ralston Videographer: Aidan Ralston

Haunted Mississauga took place on Saturday October 5, 2019 at The Riverwood Conservancy. This year our story is set in 1919, in connection with the 100th anniversary of the building of Riverwood, the Parker-Chappell House. In our story Ida and Percy Parker are hosting a grand social gathering with friends from high society, and a Liberal fundraiser for would-be Liberal party leader and friend William Lyon Mackenzie King. Guests include Senator Frank O’Connor, William Donald Ross, Lorrie Dunington-Grubb, Isabel Fasken, J.P. Bickell, Sir John Hendrie, Francous-Louis Lessard, and many others, who will be discussing politics, business, class and the scandals of the day.

Visitors will be taken on guided tours of the property and have a chance to interact with actors portraying people from the past in a highly entertaining, improvisational evening of live history! 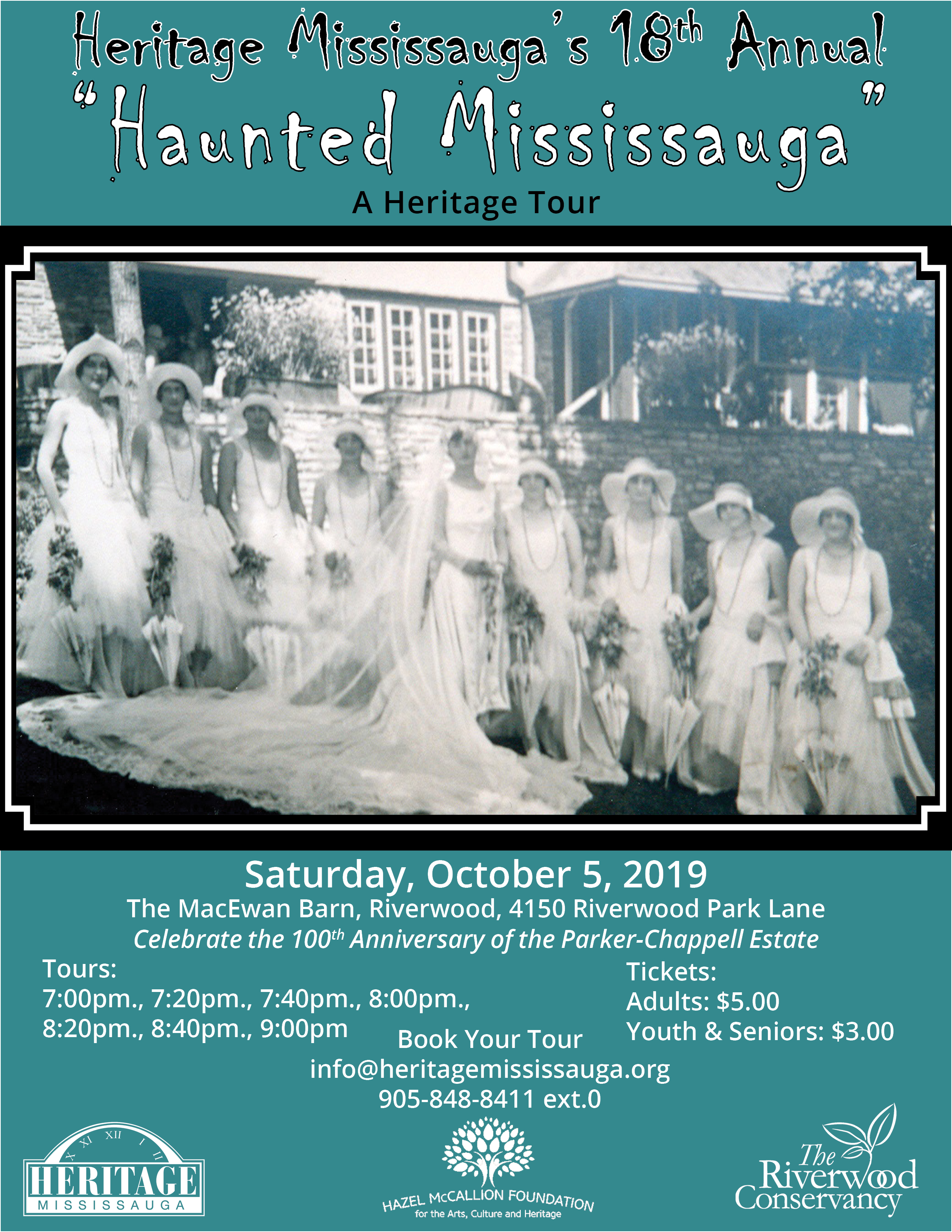 The 17th annual Haunted Mississauga evening took place on Saturday, October 20th, 2018 at Benares Historic House in Clarkson. The evening was themed on a First World War Victory Party, and visitors were treated to stories from our past, featuring in-character actors portraying people from our past.In our story visitors had the opportunity to “meet” many people from our city’s past, as they are portrayed by our volunteer cast of actors. The actors are each given a factual biography of the person, a background on their life and times based on the historical information that we have, and the actors are then asked to “become” that person for the evening. They do so respectfully, and with humour, but also try to stay true to the storyline of the evening. However, nothing is scripted and all of the actors’ interactions, with each other, with the tour guides, and with the audience, is live improvisational theatre!

Special thank you to our event partners:  the Museums of Mississauga and Thompson’s Company (2nd Regiment of York Re-enactment Company). This evening would not be possible without their support!

WANT TO BE A VOLUNTEER ACTOR?

Are you interested in participating in future Haunted Mississauga events? Please contact Heritage Mississauga for more information. No experience necessary! 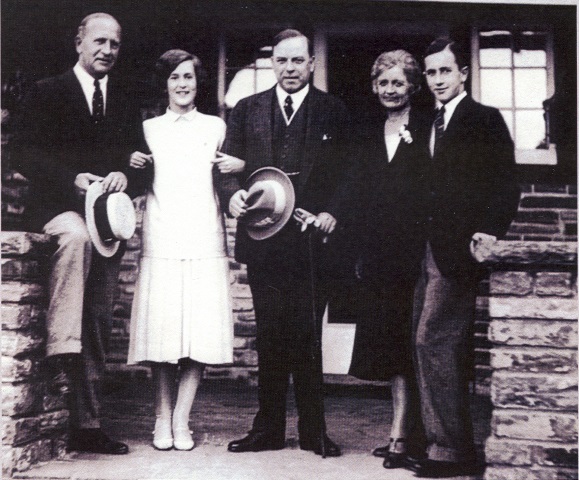 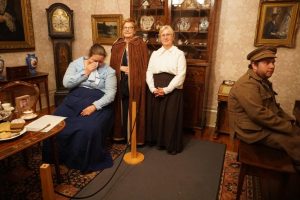 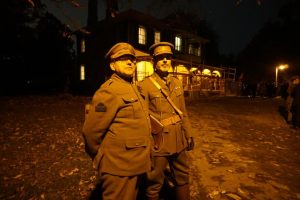