On June 20th of 1812, the Twelfth United States Congress and President Madison approved a declaration of war that officiated American military action against Britain and Canada. 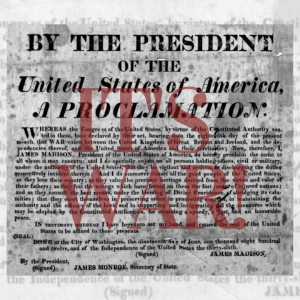 motivated by several factors on the American end, among them shipping and sovereignty disputes, British support for indigenous peoples combatting the United States, and American designs and economic motivations for the annexation of Canada. It would take four to five days for the news to reach Canada, arriving on June 24th to Lieutenant-General George Prevost, commander of British forces in North America. Once news arrived, preparations for the defense of Canada were immediately under way.

Oddly enough, Britain suspended the Orders-in-Council, a legislation affecting American shipping and a major source of US grievance, three days after the declaration of war. Both sides were unaware of the news, however. The Congress which declared war, dubbed “The War Congress,” was notable for its vocal group of “War Hawks” who fiercely advocated for war with Britain. Despite this, the war remained largely unpopular, with several American states even electing to continue trade with Canada (notably Maine and Vermont) and refusing to commit their state militias to the invasion. This, nonetheless, marked the official start of the War of 1812, though it would take some time for fighting to begin.

Stay tuned to our social media for updates on a chronological exploration of the War of 1812! Visit https://www.2ndyork.com/ to follow Thompson’s Company.