The meeting of the “Founding Fathers” is an artist’s concept found in the book 175 years of history, 1825-2000: St. Peter’s Anglican Church, Erindale” by Thompson Adamson which depicts a meeting of a group of men from the settler and Indigenous communities, who helped to chart the course and shape the world for early residents. 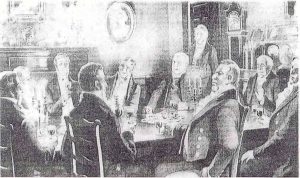 Although the image is fictitious and the meeting never occurred, each one of the names reflects on a prominent early family that helped to shape the Mississauga we know today, and their names are remembered in different ways on our modern landscape.

On behalf of Heritage Mississauga, we wish all of the Dads a historic Father’s Day!

Way Back Wednesday: The History of Solomon Northrup’s Visit To Streetsville

For those who have read the book, or watched the recent movie Twelve Years a Slave, the name Solomon Northup may be known to you. Solomon was free-born circa 1807 in Hebron, New York. Solomon and his wife, Anne Hampton, had three children: Elizabeth, Margaret and Alonzo. Solomon worked as a farmer and raftsman. After moving…

Ask A Historian: Following the Streets of Mississauga

This week on Ask A Historian, Matthew Wilkinson follows up on inquiries he received about the historic significance of some of the streets that run through Mississauga from visitors to The Grange over the weekend. Matthew takes viewers on an exploration of the people, events, and geography that influenced the names of streets in Mississauga….

A life well-lived. It was with tremendous sadness that we learned of the passing of Dr. Ignat (“Iggy”) Kaneff on July 12 at the age of 93. How does one remember someone who had such tremendous connections within our city, and elsewhere? Iggy was a dedicated community leader and city builder, and aside from his…