Women Declare: “This is Our Battle Too.”

On August 13, 1941, the Canadian government announced the formation of a new Canadian Women’s Army Corps (CWAC).

Women were recruited to perform support and clerical jobs that male soldiers typically performed to free up men for combat.

21,624 women served in the CWAC, 4 of whom were wounded while on active service.

In spite of many challenges, and resistance from some men who served, 40% of the women who enlisted for the CWAC stated patriotism was a primary motivator, others listed the desire for new adventures and opportunities, and many enlisted to support loved ones who were serving. A prominent CWAC motto was “We serve that men may fight.” 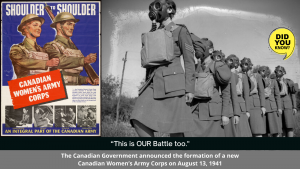 Welcome to our ninth installment of “Ask a Historian”. Every week Heritage Mississauga will be taking questions about the history and heritage of Mississauga which our Historian, Matthew Wilkinson, will answer on Thursday afternoons. #ApartTogether, Heritage Mississauga is the source for inquiries and curiosity about our beautiful city as we continue our mandate to research,…

Raising Our Voices: The International Day for the Elimination of Racial Discrimination

#InternationalDayfortheEliminationofRacialDiscrimination highlights the need for  strengthening meaningful and safe public participation and representation in all areas of decision-making to prevent and combat racial discrimination; reaffirming the importance of full respect for the rights to freedom of expression and peaceful assembly and of protecting civic space; and recognizing the contribution of individuals and organizations that stand up…

A. Grant Clarkson Heritage Mississauga is saddened to announce the passing of one of our founding members, strong heritage advocate, and distinguished patron. Arthur Grant Clarkson, 1915 – 2011, passed away at Credit Valley Hospital on February 6, 2011. He was predeceased by his beloved wife Janet (Johnston) in 2004. Survived by his children Barbara…