Heritage Mississauga joins all those who today pay their respects on the passing of Premier William Davis, the 18th, and longest serving, Premier of Ontario.
Today we reflect on the incredible legacy he has left behind.

Prime Minister Trudeau made the following comment upon hearing of the sad news:

“Mr. Davis spent more than 25 years serving his province and was the second longest serving Premier of Ontario. He led the province for 14 years during a transformative time in its history. As Premier, and as a long-serving Minister of Education, he established TVOntario and oversaw the creation of several new universities and the province’s community college system.

“He will be remembered for putting into place Canada’s first-ever environmental land‑use plan and for his role in the patriation of the Constitution, which resulted in the Canadian Charter of Rights and Freedoms.

“He was a skilled statesman who set aside partisanship and worked with my father, Pierre Elliott Trudeau, to bring forward concrete change and uphold our shared values, like diversity and human rights, through the creation of the Charter.

“In recognition of his many accomplishments, Mr. Davis was sworn in as a member of the Queen’s Privy Council of Canada in 1982. He was invested as a Companion of the Order of Canada in 1986 and as a Companion of the Order of Ontario in 1987, and inducted as a Knight in France’s Legion of Honor in 2001.”
William Davis left an indelible mark on the history of Canada as well as locally here in Mississauga.  He played a pivotal role in the founding of Erindale College (later renamed the University of Toronto Mississauga).

In 1962, Davis was appointed education minister and oversaw the university affairs portfolio. During his tenure, he oversaw a transformation of Ontario’s education system, including the creation of Ontario’s community college system, Ontario’s Institute for Studies in Education (OISE), and the founding of several new universities and colleges—including UTM.

The William G. Davis Building at UTM is named in his honour. 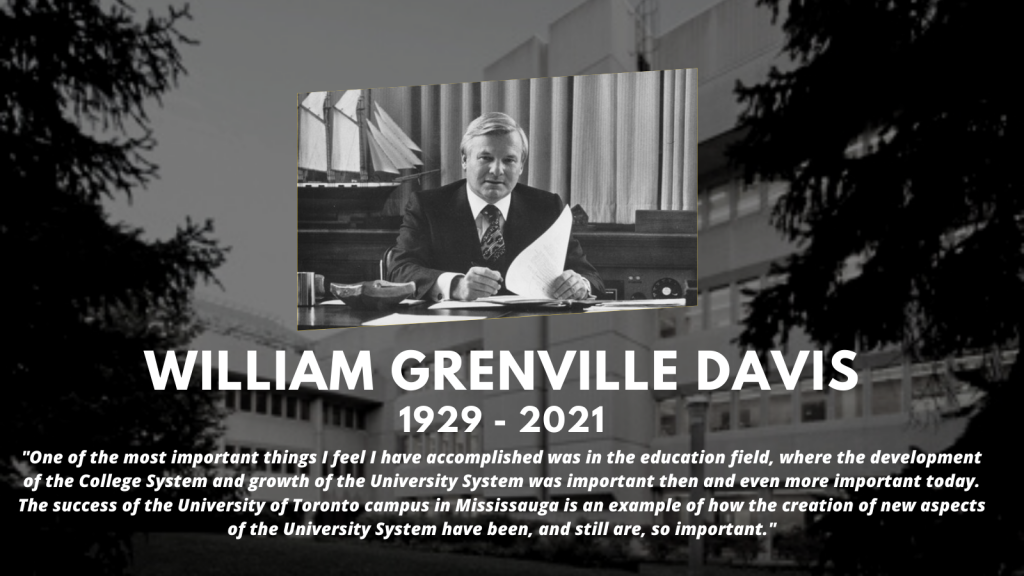 March 3, 2021 is World Wildlife Day and the theme this year is “Forests and Livelihoods: Sustaining People and Planet”, as a way to highlight the central role of forests, forest species and ecosystems services in sustaining the livelihoods of hundreds of millions of people globally, and particularly of Indigenous and local communities with historic…