In April 2021, Nahnebahwequay was designated a national historic person and today we explore the fascinating story of the icon and activist known also as the “upright woman”.

She was the daughter of Tyatiquob (Bunch Sonego) of the Eagle Clan and Myarwikishigoqua (Mary Crane), of the Otter Clan. She was the niece of Mississauga Chief Kahkewaquonaby (Reverend Peter Jones). During her early years she lived at the Credit Mission Village in what is today the City of Mississauga. 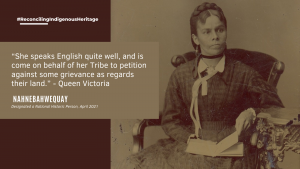 In 1837 she travelled to England with her aunt, Eliza Jones, and in 1839 she married William Sutton, an English-born Methodist Minister. In 1846 Nahne (Catherine) and her husband moved to the Owen Sound area, where they built a house and operated a farm.

By 1852 they were living at the Garden River Reserve near Sault Ste. Marie, and in 1854 they moved to Michigan where William was engaged with a Methodist mission. In 1857 they returned to the farm near Owen Sound, only to find that the Crown had secured the surrender of the Bruce Peninsula and did not recognize their land title. Efforts to reacquire their land by petition to the Crown in 1858 were unsuccessful, and in 1859 Nahne (Catherine) travelled to England to present their case personally to the Colonial Secretary. With the support of Quakers, her passage to England and introduction to British politician Robert Alsop were secured. Alsop, in turn, arranged for Nahne (Catherine) to meet with the Colonial Secretary (Secretary of State for the Colonies), Henry Pelham-Clinton, 5th Duke of Newcastle. Impressed by their meeting, the Duke of Newcastle arranged for Nahne (Catherine) to meet the Queen.

On June 19, 1960 Nahne (Catherine) was presented to Queen Victoria, who noted in her private journal: “She speaks English quite well, and is come on behalf of her Tribe to petition against some grievance as regards their land.” As a result of the direct intervention of the British Crown, the Suttons were allowed to buy back their land.

Upon her return to Canada, Nahne (Catherine) continued to advocate for the rights of Indigenous peoples. During the last two and a half years of her life she suffered from poor health and died in 1865.

You can read more about the life of Nahnebahwequay (Catherine Sutton) in Mississauga Portraits: Ojibwe Voices from Nineteenth-Century Canada by Donald B. Smith, available at Heritage Mississauga and local bookstores.

Puts Heritage at Risk! Get your comments in – deadline today 11:59pm. To whom it may concern, Heritage Mississauga has reviewed the Bill 23 (More Homes Built Faster Act, 2002) and the proposed changes to the Ontario Heritage Act and to heritage planning. In consideration of Mississauga’s unique heritage context, Bill 23 presents some significant…