Staff Sergeant David Yakichuk Park is located in the Cooksville area, at 3111 Confederation Avenue, near the intersection of Confederation Avenue and Hillcrest Avenue. David Yakichuk was born in Canora, Saskatchewan in 1929, and eventually moved east in search of work. He worked on farms in the Oshawa area, for Massey Harris in Toronto working with farm machinery, and later joined the York Township Police Deparment. 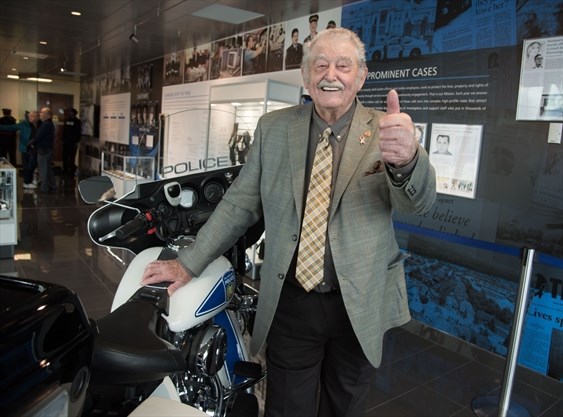 In 1957 he joined the Toronto Township Police Department, which became the Peel Regional Police Department in 1974. He served with the police force for 34 years, largely based in the Cooksville area.

He was largely involved with traffic patrol, but in this role he distinguished himself by heading a police-in-the-school program. The Peel Regional Police identify him as a pioneer in youth education for Police services. He worked extensively in various safety projects within the community teaching safety rules to Peel’s school children. In the late 1970s he was part of the Peel Regional Police Safety bureau and later the Traffic Safety Bureau.

Yakichuk was promoted to a Sergeant in 1973 and to a Staff-Sergeant in 1982. In 1985 the park on Confederation Avenue was named in his honour in recognition to his significant contributions to the community and to safe driving education.

It can be found on their website here: https://www.modernmississauga.com/main/2019/8/28/the-history-of-mississaugas-staff-sergeant-david-yakichuk-park

August 15th, 2021 commemorates the 76th anniversary of the end of the Second World War for Canada but did you know there are a few significant dates that mark the end of the War for different countries around the world? May 2, 1945 marked the end of the war in Italy and the Mediterranean. May…

Trees: The Lungs of the Earth

Happy Earth Day to all of our global citizens! In recognition of #EarthDay, we invite you to take action and help to #RestoreOurEarth. One vital resource for the well-being of our planet, and ourselves, is trees. Trees are like the lungs of the earth; without their leaves, they actually look similar to lungs! Benefits of trees:…