May is Museum Month and this year the theme is #MuseumsConnectON which explores how even in a time of social distancing, we are able to connect through our history, heritage, art, and common interests.

In connection to our Saturday Matinee “Found Footage of the Bradley Museum & Historic Benares House Tour”, we would like to share some of the farming tools that were used on farms in Mississauga and tell a story of the contributions of the historic Mississauga families who worked the land and contributed to the landscape we see today. 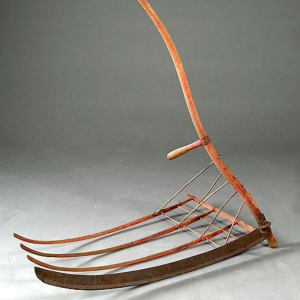 A grain cradle, or cradle scythe, is a modification to a standard scythe to keep the cut grain stems aligned. The cradle scythe has an additional arrangement of fingers to catch the cut grain so that it can be cleanly laid down in a row with the grain heads aligned for collection and more efficient threshing.

A hand sickle, or reaping-hook, is a single-handed farming tool designed with variously curved and/or serrated blades and was used for harvesting, or reaping, grain crops or cutting forage for livestock. Sickles have been in use for thousands of years, and there is a great range of styles and blades across many cultures. Despite a wide range of designs, sickles are generally used for cutting either green grass or mature cereals using slightly different techniques. 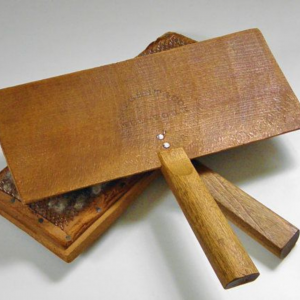 Hand cards are typically square or rectangular paddles with combs or metal teeth used for the carding of wool in preparation for spinning. A pair of cards is used to brush the wool between them until the fibres are more or less aligned in the same direction. The aligned fibre is then peeled from the card. 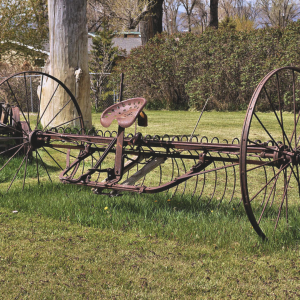 A hay rake is an agricultural implement used to collect cut hay or straw into windrows for later collection. It is also designed to fluff up the hay and turn it over to facilitate drying. Hay rakes can be mechanized, drawn by a tractor or draft animals, or it may be a hand tool. The typical early horse-drawn hay rake was also called a dump rake, and was a wide two-wheeled implement with curved steel or iron teeth usually operated from a seat mounted over the rake with a lever-operated lifting mechanism.

Mississauga the First City to Permanently Fly the #EveryChildMatters Flag

Today the City of Mississauga became the first Canadian city to raise the #EveryChildMatters flag permanently! The flag was raised by Gimaa (Chief) Stacey Laforme, Grandmother Kim Wheatley, and Mayor Bonnie Crombie. We are so proud to witness our great city becoming the first to raise the flag to symbolize the commitment to #TruthandReconciliation. Heritage…