The is a park near John Fraser Secondary School on Erin Centre Boulevard that some simply refer to as Q Park. Its full name is Quennipenon Meadows. The parks features baseball diamonds, some sports fields, walking paths, a wooded ravine and creek, and a leash-free dog park area. But back to the name. The park was named for an Indigenous chief of the Mississaugas who signed provisional Treaty 13-A on August 2, 1805 near the mouth of the Credit River. The treaty surrendered over 74,000 acres of land to the British Crown in exchange for a 1000 pounds province currency given in trade goods. 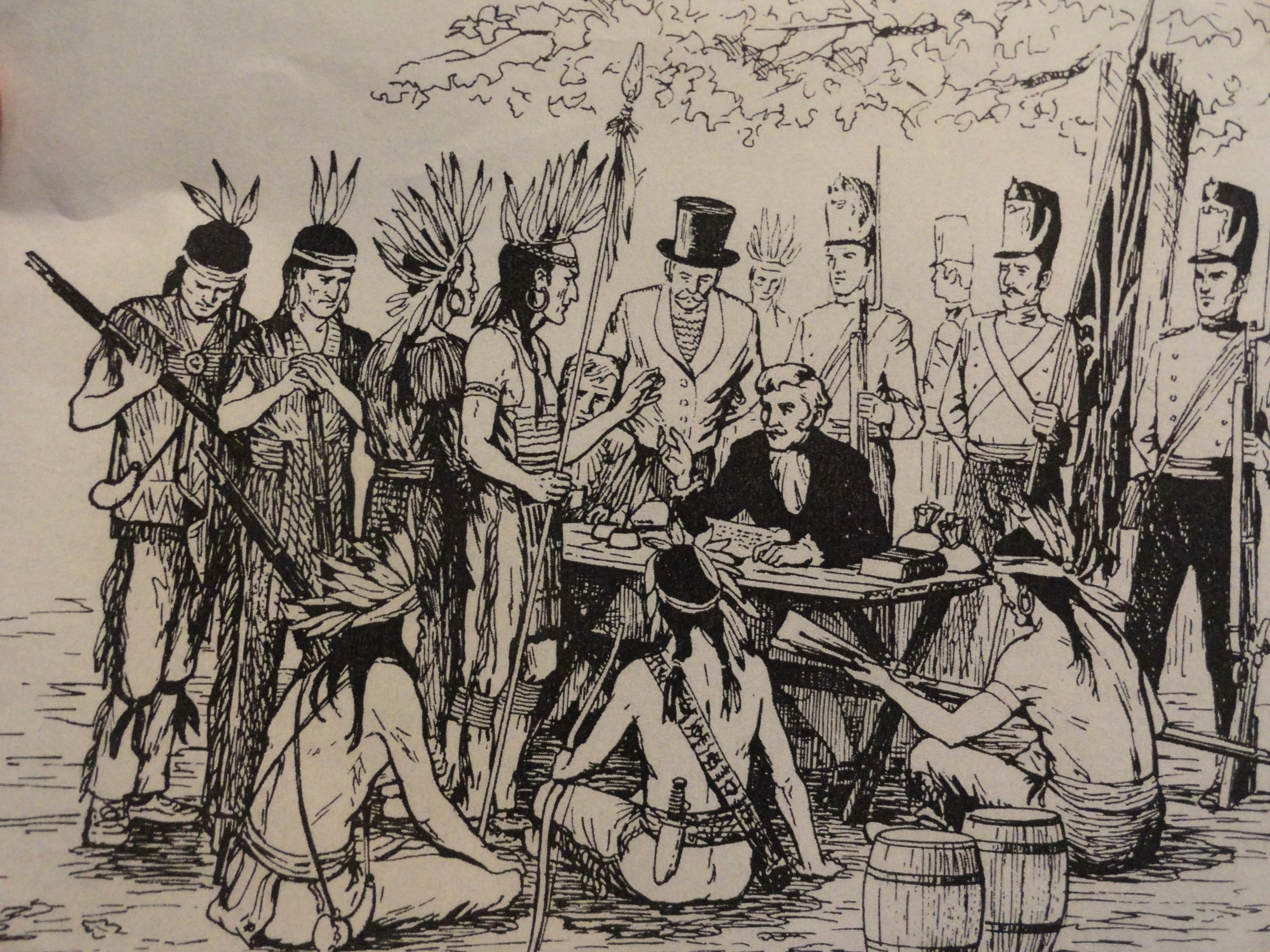 The Indigenous chiefs who signed the treaty were Chechalk, Quenepenon, Wabukanyne and Okemapenesse. Only Chechalk does not have a name reference on our current city landscape. Lake Wabukayne and Lake Wabukayne Park are named for Chief Wabukanyne (as outlined in an earlier article in this series). Near the original course of Wabukayne Creek (after which the made-made lake takes its name) is Oka Road, named in reference to Chief Okemapenesse, and, of course, Q Park or Quennipenon Meadows is name for Chief Quenepenon. The name references were created with development in the area in the 1970s.

Chief Quenepenon (also referred to as Kineubenae, Giniw-bine, Quinipeno, Quenippon, Quennipenon, Quenebenaw and Golden Eagle), he was born around 1750 and died in 1812 near Burlington. He was the principle chief of Mississaugas along Twelve Mile Creek (near modern Stoney Creek), and a member of the Otter Clan. He was known to be a shrewd bargainer who spoke English, and likely spoke for the Mississaugas during negotiations with Crown representatives.

Transcription from Treaty 13-A 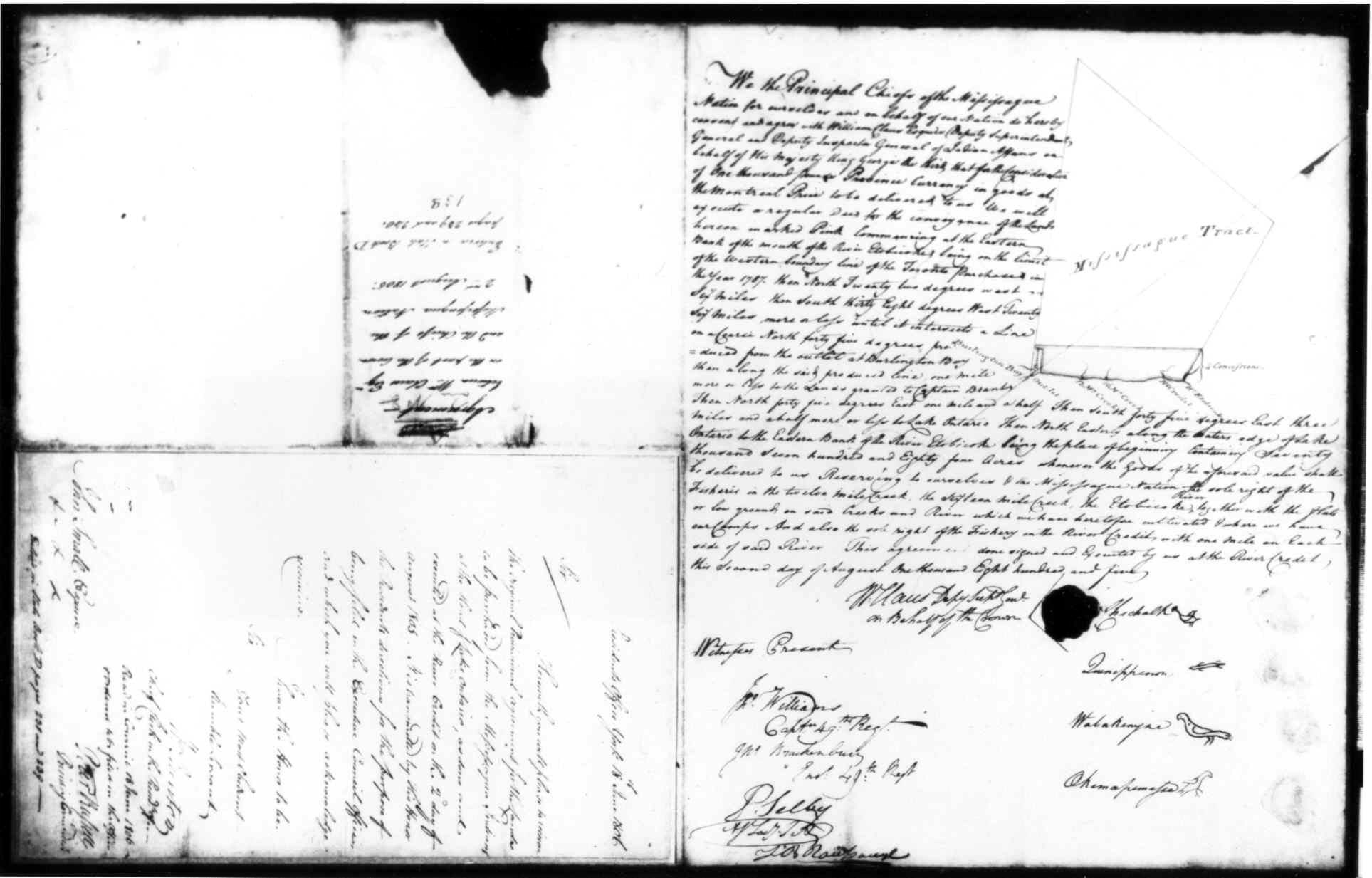 We the Principal Chiefs of the Mississague Nation for ourselves and on behalf of our Nation do hereby consent and agree with William Claus Esquire Deputy Superintendent, General and Deputy Inspector General of Indian Affairs on behalf of his majesty King George the third that for the consideration of one thousand pounds Province Currency in goods at the Montreal Price to be delivered to us the will execute a regular deed for the conveyance of the lands hereon marked Pink Commencing at the eastern bank of the mouth of the River Etobicoke being on the limit of the western boundary line of the Toronto Purchase in the year 1787, then North Twenty two degrees west of six miles then South thirty eight degrees West Twenty six miles more or less until it intersects a Line on a Square North forty five degrees produced from the outlet of Burlington Bay then along the said purchase line one mile more or less for the lands granted to Captain Brant. Then North forty five degree East one mile and a half Then South forty five degrees East tree miles and a half more or less to Lake Ontario then North Easterly along the waters edge of lake Ontario to the Eastern Bank of the River Etobicoke being the place of beginning containing seventy thousand Seven hundred and Eighty four acres whenever the goods of the aforesaid value shall be delivered to us Reserving to ourselves and the Mississiague Nation the sole right of the fisheries in the twelve mile Creek the thirteen mile Creek, the Etobicoke River, together with the plants on the grounds on said Creeks and River which we have hereafter cultivated fishery we have out camps and also the sole right of the Fishery on the River Credit with one mile on Each side of said River. This agreement done signed and executed by us at the River Credit, this second day of August one thousand eight hundred and five,

William Claus Deputy Superintendent, on behalf of the Crown 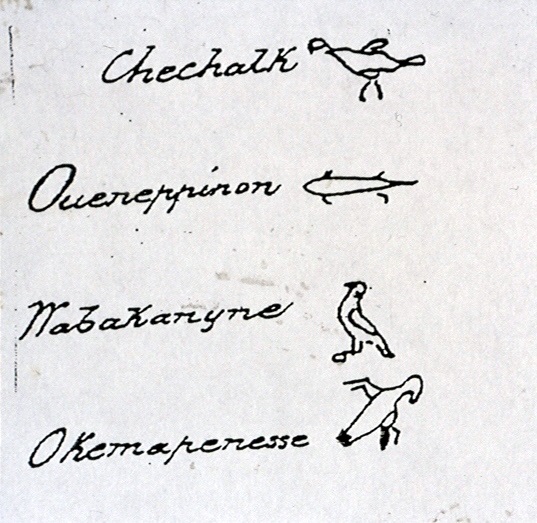 Chiefs of the Mississaugas:

It can be found on their website here: https://www.modernmississauga.com/main/2019/8/21/the-history-of-mississaugas-quennipenon-meadows-also-known-as-q-park

Way Back Wednesday: The History of Mississauga’s Sawmill Creek

Before Christmas we received an inquiry asking about the name origin of Sawmill Creek. The answer is a fascinating look at local history, and how place names remain on our landscape from many years ago. In short, the creek takes its name from being the source of power for a sawmill, or possibly two sawmills….

April 9th marks #VimyRidgeDay, a day during which we remember the thousands of Canadians who fought and gave their lives in the Battle of #VimyRidge. Vimy is a name that rings proudly through Canadian history. Even for those who may not know the story of what, when and why, most connect the word Vimy with…

This week is Heritage Week in Ontario, and there are a number of programs celebrating our local, provincial and national heritage. In 1985, the Province of Ontario identified the third week of February as Heritage Week as a way “to stimulate awareness of heritage resources and heritage-related issues within their communities, and to honour the…

Join us for our first webinar in our 2021 Indigenous Conversations series, as we welcome Former Chief of the Mississaugas of the Credit First Nation, Carolyn King. Carolyn delivers her unique, informative workshop, Indian 101. She has been engaged by government, colleges and universities, businesses and community organizations to do cross-cultural training sessions and presentations to help people…