As recounted in an earlier article in this series, there was a time, many years ago, that steamships traversed the Great Lakes, carrying passengers to and from larger cities to various stopping places, ports, and pleasure grounds. Each of the Great Lakes, and many of the smaller lakes in “cottage country”, was served by steamships. The steamships carried passengers, mail and cargo and were a vital link in the early transportation network. The last of the active steamships, the Cayuga, ceased operation in 1962. The RMS Segwun in Gravenhurst recalls the grand, and romantic, era of the steamships. Retired from service in 1958, the RMS Segwun was restored and re-entered service on Lake Muskoka in 1981. 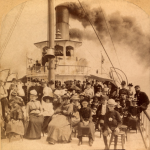 Steamships once stopped at Port Credit and Lorne Park here in historic Mississauga. They were short-lived ventures amidst the larger time frame of steamship service on Lake Ontario, but stop they did. The ships were well-known on the lakes. Perhaps the best-remembered was the sidewheeler Chicora, who had a long and storied career.

Others have written about the Chicora as well, so there is a great deal of information “out there” on this ship and her remarkable career.

The Chicora was launched in 1864 in Birkenhead, England. She was originally christened the Let Her B (or Let ‘Er Be), and sailed under the name Letter B. She was built for the Chicora Import and Export Company of Charleston, South Carolina. During the American Civil War, the Chicora, as a small, fast and agile steamer, was a blockade runner, transporting cotton from the Confederate States to England, while at the same time evading the blockade of southern ports by the United States Navy. The Chicora was noted to have evaded the blockades on each run she made, although with a few close calls.

With the end of the American Civil War in 1865, the Chicora was laid up in Halifax. In 1867 she was purchased by Donald and Nicol Milloy of Toronto, along with several business partners. 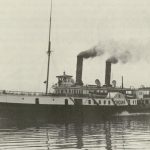 The Chicora was then brought to Quebec, where she was cut into two sections for transport via barge through the Lachine rapids on the St. Lawrence River. The two sections were shipped to Buffalo in the Spring of 1868, where the Chicora was reassembled and outfitted for luxurious overnight passage. In the Spring of 1869, the Chicora entered service running originally from Collingwood on Georgian Bay, to Sault Ste. Marie, to Fort William on Lake Superior (and smaller ports along the way).

In May of 1870 the Chicora departed Collingwood with a contingent of soldiers being sent to the Red River Colony to help suppress the rebellion led by Metis leader Louis Riel. The Wolseley Expedition embarked on the long trek to the northwest aboard the Chicora, only to find their way barred at Sault Ste. Marie. The armed force was not permitted passage through the locks (which at that time were on the American side of St. Marys River. The Chicora was delayed for two weeks, until finally receiving permission to carry on. In what became known as the Chicora Incident, this placed questions on Canadian reliance on American locks, and eventually led to the construction of a lock on the Canadian side. An Ontario Heritage Trust plaque at Sault Ste. Marie remembers the story.

In 1874, the Chicora was refitted for a vice-regal tour for Governor General Lord Dufferin, where she toured Lake Huron, Lake Michigan and Lake Superior. In 1877 the Chicora was brought back to Lake Ontario, although she had to be cut apart again in Buffalo to allow transit through the Welland Canal. She re-entered service in May of 1878 with a regular run between Toronto 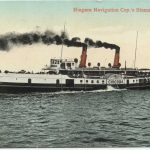 and Niagara, calling at all points in between, including, for a time, at Lorne Park and Port Credit. She became a familiar and well-loved ship. The Chicora was operated by the Niagara Navigation Company alongside her sister ships (albeit newer and larger), the Corona and the Chippewa at the turn of the century. 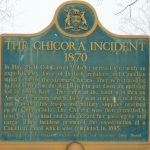 In 1900 the Chicora was again called to assist as she rescued the crew of the Port Credit schooner Maude S. as she sank off of Twelve Mile Creek near Bronte.

In 1904, the aging Chicora received her last major overall and was re-outfitted for day-use excursions. In 1907 a new ship, the Cayuga, joined the Niagara fleet. After several mergers and reorganizations, the Chicora, now showing her age, made her last passenger run on September 7, 1914. She was tied up in Toronto, and almost forgotten for 5 years. In 1919 she sprang a leak and sank in 24 feet of water. Refloated and patched, it was apparent that she was at the end of the line and the registry for the Chicora was closed in January of 1920.

The old Chicora was then stripped of her cabins, paddle boxes and engines, sold to the Warren Transportation Company and converted into a barge. Renamed the Warrenko, she was used for bulk coal transport between Oswego and Kingston until 1938, when she sank in Kingston Harbour. Refloated once again, she was taken to Howe Island and scrapped, after having been afloat for over 70 years.

Written by Matthew Wilkinson for our Way Back Wednesday series in partnership with Modern Mississauga Media:

February 23, 2021 is Canada’s Agriculture Day. In recognition of #CDNAGDAY we would like to explore the farmers who broke ground and had a historical impact on the heritage and landscape of Mississauga. On our last episode of “Ask A Historian”, Carter inquired about the first Non-Indigenous farmer in Mississauga and the answer was a…

Heritage Mississauga continues to research, record, and celebrate Black History in Canada. Research Centre Assistant Justine Lyn has embarked on an arduous research project to gather records on the history and journey of many Black families that came to Canada. One of the many resources Justine has utilized is census records, which tell fragments of…