Did You Know?: Nurses Serving in WWI Helped Advance Women’s Right to Vote

DYK that nurses serving in WWI not only made invaluable contributions to the war efforts with their expert care of the wounded or dying soldiers, but they also helped advance women’s right to vote?

The First World War marked the first time that female suffrage was seriously considered by policy makers. Thousands of women made the journey overseas and served in the Canadian Medical Corps. Sadly, 53 nurses died while in service. On the home front, women flooded into the workforce as men were shipped abroad. Women were employed by munitions factories and other occupations that were previously dominated by men.

One of the most significant contributions by women to the war effort were the countless hours in free labour that the women provided: they knitted warm clothing for soldiers, collected rations, and sold victory bonds, and countless other support activities.

The number of volunteer recruits plummeted after the summer of 1916. This forced Prime Minister Borden to revise his promises about conscription. Borden avoided a conscription crisis by creating a coalition government. Borden implemented two bills that would ensure the success of the Union party. The Military Voters Act and the Wartime Elections Act came into effect on September 20th, 1917. The former gave all members of the Canadian armed forces the right to vote, which included nurses. The Wartime Elections Act gave the vote to female relatives of servicemen.

In general advanced education for women was lacking, especially for those in rural areas like historic Mississauga. This is evident from a Globe and Mail article written in the spring of 1917, where the editorial narrative suggests that women had to be educated to “properly” vote:

“What a tremendous undertaking our women have taken upon themselves; the task of educating women to vote right. When election time comes the politicians will come around, a few nice words spoken in women’s favour will win votes. I am speaking for country women who are always busy, and yet whose votes may turn a whole election.”

Many believed that women were unable to vote rationally. The Globe and Mail published a wife’s account of what her husband had told her to do with this opportunity. It read,  “You just find who’s hottest for reinforcing the boys out here without the waiting game and plant your vote for him, little woman”. Although some women got the right to vote, the choice for many was largely influenced by the men in their lives.

Borden could no longer deny female suffrage after their assistance in the election of 1917. As the Globe and Mail had proclaimed, “After the black night of the war there will come the dawn of a new day”. On May 24th, 1918 an Act was finally passed that gave women over the age of twenty-one the right to vote in federal elections.

While this Act enfranchised a large number of Canadian women, it only enhanced other Canadian prejudices. This Act excluded women who were status Indians, Asians, Hutterites and Mennonites. These limitations made this Act more of a symbolic victory, but the Military Voters Act and the Wartime Election Act did accelerate the cause for women’s suffrage.

Women, such as Nursing Sisters, who served in a military capacity were proposed as the first to be eligible to vote in federal elections. In September 1917, the franchise was extended to Canadian women, over 21 years of age, with a relative who was serving, or had served in the War.

#ApartTogether we express our gratitude for the efforts of #Nurses around the world for their historic contributions and their ongoing dedication and care they continue to provide today. 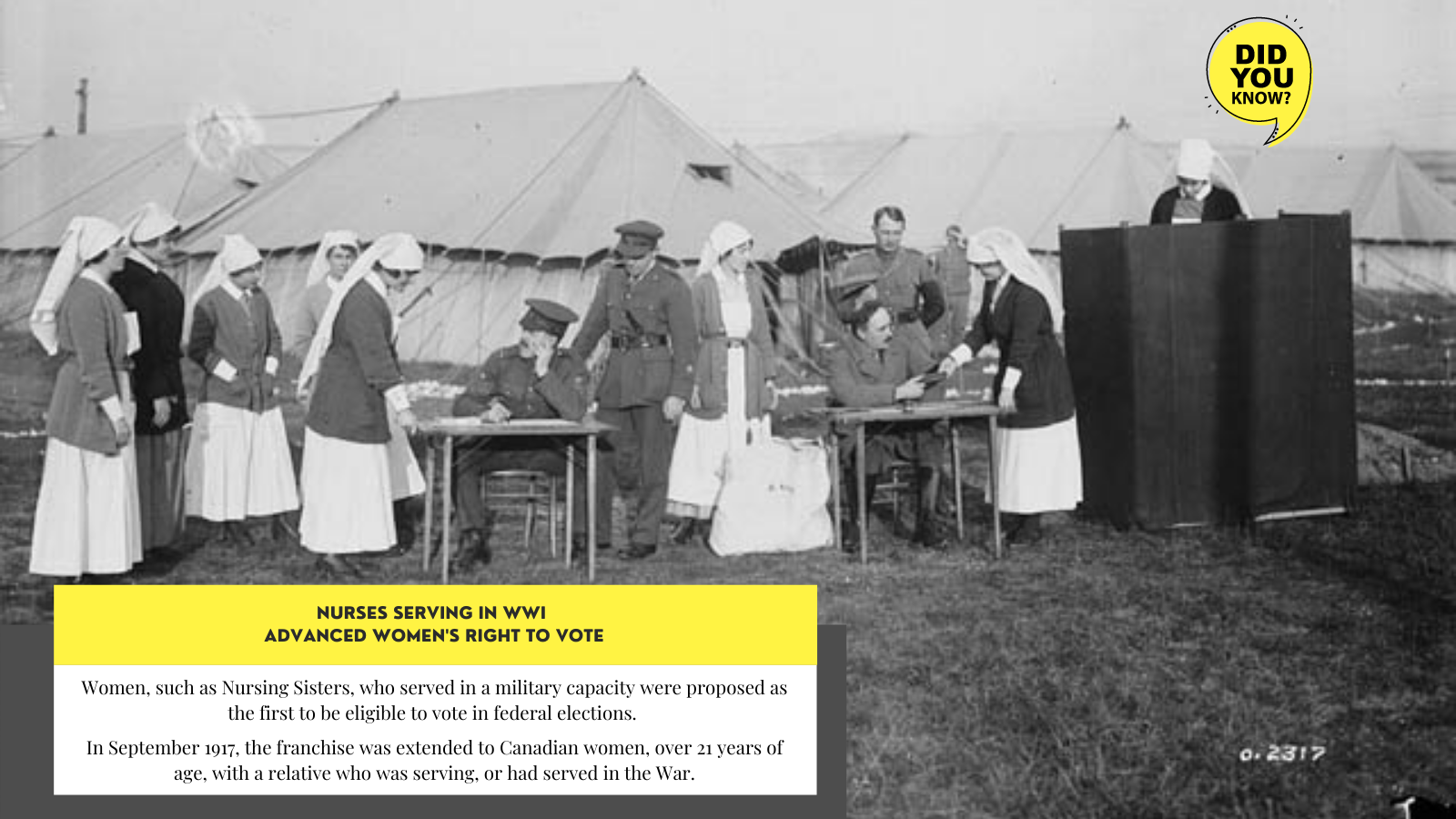 “But What About Canadian Women?” By Alexandra Rayner

Marvel may have created Superhero Day back in 1995 to celebrate their favorite comic book heroes, but we are going to celebrate some of our real Superheroes! Today we would like to recognize all of the teachers who have had the superhuman fortitude and dedication to face the continually evolving teaching environment and requirements. Teachers stand up for…

On September 12, 2021 George “Strombo” Stroumboulopoulos joined the echelon of talented Mississauga inductees into the Mississauga Music Walk of Fame. George Stroumboulopoulos has been a part of our culture for many years as a a television and radio broadcaster, actor, media producer, and humanitarian. He is respected internationally for his authentic, engaging, and well-researched…

On June 20th of 1812, the Twelfth United States Congress and President Madison approved a declaration of war that officiated American military action against Britain and Canada. The war was motivated by several factors on the American end, among them shipping and sovereignty disputes, British support for indigenous peoples combatting the United States, and American…