Truth & ReconciliACTION: The 94 Calls to Action 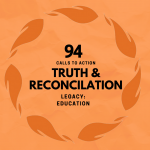 In June 2015, members of the Truth and Reconciliation Commission (TRC) presented 94 Calls to Action that would help “redress the legacy of residential schools and advance the process of Canadian reconciliation” with Indigenous peoples.

Throughout the month of September and leading up to #OrangeShirtDay and #NationalDayForTruthAndReconciliation we will be reminding the governments of the 94 calls to action.

Today we will be reminding the government of Actions 6-12 of the 94 Calls to Action which seek equity, respect, independence, inclusivity, accessibility, and culturally appropriate curricula in education.

Action 6 calls on the Government of Canada to repeal Section 43 of the Criminal Code of Canada which reads:

“Every schoolteacher, parent or person standing in the place of a parent is justified in using force by way of correction toward a pupil or child, as the case may be, who is under his care, if the force does not exceed what is reasonable under the circumstances.”

They are as follows:

6. We call upon the Government of Canada to repeal Section 43 of the Criminal Code of Canada.

7. We call upon the federal government to develop with Aboriginal groups a joint strategy to eliminate educational and employment gaps between Aboriginal and non-Aboriginal Canadians.

9. We call upon the federal government to prepare and publish annual reports comparing funding for the education of First Nations children on and off reserves,as well as educational and income attainments of Aboriginal peoples in Canada compared with nonAboriginal people.

10. We call on the federal government to draft new Aboriginal education legislation with the full
participation and informed consent of Aboriginal peoples. The new legislation would include a
commitment to sufficient funding and would incorporate the following principles:
i. Providing sufficient funding to close identified educational achievement gaps within one
generation.
ii. Improving education attainment levels and success rates.
iii. Developing culturally appropriate curricula.
iv. Protecting the right to Aboriginal languages, including the teaching of Aboriginal languages as credit courses.
v. Enabling parental and community responsibility, control, and accountability, similar to what parents enjoy in public school systems.
vi. Enabling parents to fully participate in the education of their children.
vii. Respecting and honouring Treaty relationships.

11. We call upon the federal government to provide adequate funding to end the backlog of First Nations students seeking a post-secondary education.

In memory of Marian M. Gibson (1937-2013) Heritage Mississauga was saddened to learn of the recent passing of Marian M. Gibson, a past president of our organization. Born in 1937 in Wales and a resident of Port Credit, Marian passed away on November 8th, 2013. To those who knew her and shared her love of…

Ask A Historian: Mississauga Connections to the Battle of Vimy Ridge

Ask A Historian: Celebrating Canada Day and Mississauga’s Connections to Our National History

Welcome to our 55th installment of “Ask a Historian”. Join Historian Matthew Wilkinson for our next episode of “Ask A Historian” on July 1, 2021 on our YouTube channel. This week Matthew welcomes Richard Collins as they explore Canada Day and many of the historic figures from Mississauga who made a significant contribution to our…