Apart but together, please help us capture the story of how the COVID-19 pandemic has affected you here in Mississauga. Please share stories and images at [email protected] or https://www.facebook.com/HeritageMississauga #ApartTogether

This week’s article focuses on what used to be John Street in Streetsville, as it was named on the 1859 Tremaine Map. The road is now known as Rutledge Road. When it was renamed is unknown, although it might have been a result of amalgamation as both Cooksville and Port Credit had (and still have) a John Street. There is also some uncertainty as to who the John Street in Streetsville was originally named for, as there are a couple of possibilities. It is likely that the street was originally named for John Rutledge, another early and prominent Streetsville resident. Given that John Street was, at some point, renamed Rutledge Road, there is some logic in that connection. Other nearby street names also connect to the Rutledge family, including Henry, William, John, Joseph, Ellen and James streets. 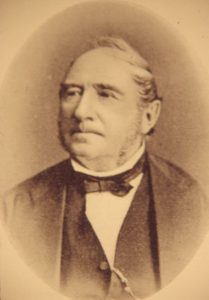 However, another early reference indicates that John Street was named for Doctor John Barnhart. Although we cannot confirm this, it is also perhaps a bit of a moot point given that the road is now named Rutledge.

But who was Doctor John Barnhart? Doctor Barnhart (1813-1901) was born on Barnhart Island, near Cornwall. His father was also named John Barnhart, who, amongst other things, was Loyalist and a veteran of the War of 1812.

John Barnhart Sr. brought his family to what would become Streetsville in 1821, where he established a trading post known as the Montreal House – which survives today and is Mississauga’s oldest surviving commercial building (located at 210 Queen Street South). 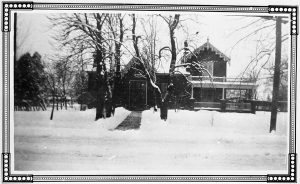 John Jr. attended the Royal Grammar School in York (Toronto), and later studied under the direction of Doctor Christopher Widmer, a leading physician in York. He later attended the Fairfield Academy and the College of Physicians and Surgeons in New York, where he received his medical license in 1834. Returning to Streetsville in the midst of a cholera epidemic, he established his practice in concert with the elder Doctor John Crumbie (1794-1877) – and locals differentiated between the two doctors by referring to them as the “Old Doctor” (Crumbie) and the “Young Doctor” (Barnhart). Doctor Barnhart’s much younger brother, Charles (1832-1909), followed in his brothers’ footsteps, entering into partnership with his brother in 1856, before establishing his own medical practice in Owen Sound in 1859.

In 1844 Doctor John Barnhart married Maria Robertson, and the couple would have three daughters: Annie, Alice and Emily. Doctor Barnhart had a large house at the corner of Queen Street and Tannery, with a frame addition that served as his office and surgery. Doctor Barnhart was the Regimental Surgeon of the Militia during the Rebellion of 1837, and served as the surgeon for 1st Battalion of York Militia from 1838-47. He was also active in politics, serving as Reeve of Streetsville in 1860-61 and 1865-68 and as the first Warden of Peel County in 1867. In addition to politics, he also served as a Grammar School trustee in 1857, 1860, 1863 and 1867, as well as a county coroner, Justice-of-the-Peace and magistrate. He was also the Secretary of the Farmers’ and Mechanics’ Institute in 1859-60.

However his primary calling was medicine, and together with Doctor Crumbie, he would attend accidents at lumber camps and mills, often performing operations by the light of a campfire. He was one of the many doctors who were called to assist following the great Cooksville fire of 1852, and in 1855 he headed the patriotic movement to provide relief for widows and orphans of the Crimean War in Europe.

After serving Streetsville for some 35 years, in 1869 Doctor Barnhart moved to Owen Sound where he entered into partnership once again with his brother Charles. He retired in 1891 at the age of 78, and later moved to Toronto where he lived the rest of years with one of his daughters, passing away in 1901. Upon his passing, he was remembered as the “father of surgery” in the province, and as a very “dignified gentleman of the old school” and “efficient doctor”, with a great sense of humour.

Heritage Mississauga’s Annual General Meeting takes place later this evening, and it marks a return, in part, to in-person gatherings after more than 2 years away. We know that our collective re-openings and re-engaging in-person can be challenging, but we do look forward, through small baby steps, to finding a new normal. Of course, the…

Today we are in day two of the three day of climate action leading up to Earth Day on April 22, 2021. The theme this year is #RestoreOurEarth and focuses on some of the actions individuals can take that will make a significant contribution to restoring and preserving a sustainable planet. One of these actions…

Welcome to our 29th installment of “Ask a Historian”. Join Historian Matthew Wilkinson on our YouTube channel for the latest episode of “Ask a Historian” on Friday December 11, 2020 at 4:00 p.m. In this special 60th Anniversary episode, Matthew welcomes Heritage Mississauga Executive Director, Jayme Gaspar, to discuss the history and evolution of Heritage…

Ask A Historian: Christmas with Museums of Mississauga

Join Matthew Wilkinson for a special holiday episode of Ask A Historian on December 9, 2021 at 4:00 p.m. This week Matthew welcomes Lindsay Doren, Coordinator of Education and Engagement for the Museums of Mississauga, as they explore some holiday traditions of the past and the many upcoming holiday events offered by Museums of Mississauga….