Way Back Wednesday: A Tale of Two Queen Streets in Mississauga

There is more than one Queen of Mississauga. I am talking about street names, of course.

There is also The Queensway, and the Queen Elizabeth Way (QEW), not to mention Queen Federica Drive, amongst others.

We will explore some of these stories in future articles. For today, we will look at the two Queens.

In terms of our two Queen streets, in Port Credit and Streetsville, simply having two roads with the same name highlights part of our city’s history.

Born through amalgamation of places that were once independent of each other, two roads having the same name reference (albeit one runs North-South and the other East-West) in a subtle way reminds us of the history of villages and towns that merged together to create the City of Mississauga.

As for the streets themselves, one has a clear cut origin, whereas the roots of the other are a bit more obscure. Which is older, you might wonder?

That depends on the way the question is asked.

Certainly Queen Street in Streetsville is the older travelled road, although its use of the name “Queen Street” may be younger.

The individuals primarily involved with this survey were George Boulton (1797-1869), the financier, and surveyor John Stoughton Dennis (1820-1885).

Both were prominent individuals from affluent Toronto families. Dennis oversaw the actual survey work, while Boulton most likely financed and outfitted the project. 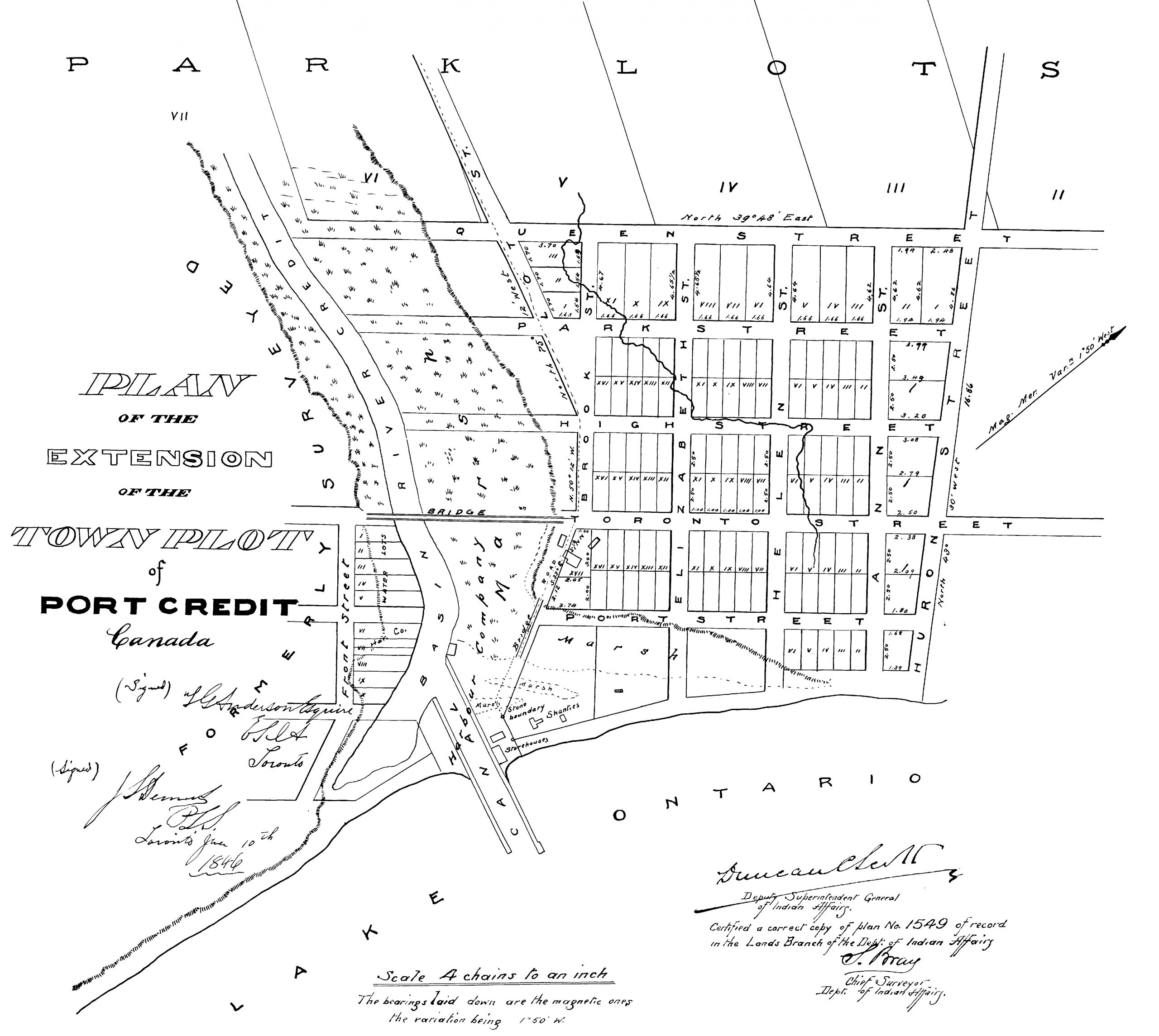 Over time, much of Queen Street East has been swallowed up by development of the GO Transit facility, although the road itself predates the railway.

Queen Street West on the west side of the river was a later creation, and if you look on maps, you will see that it does not quite line up with the original eastern section of Queen Street.

But back to the older portion on the East side of the river. The surveyor followed a somewhat traditional town plot concept.

Running parallel to the North was “High Street”, and above that was “Park Street” and “Queen Street”, which itself, following accepted naming practices, was named for the ruling monarch.

High and Park streets themselves were originally laid out on the west side of the Credit River as part of the earlier 1835 Lynn Survey.

If Queen Street had been part of the older 1835 survey on the west bank, it might well have been named “King Street”, being named for the ruling monarch at that time, but I digress. 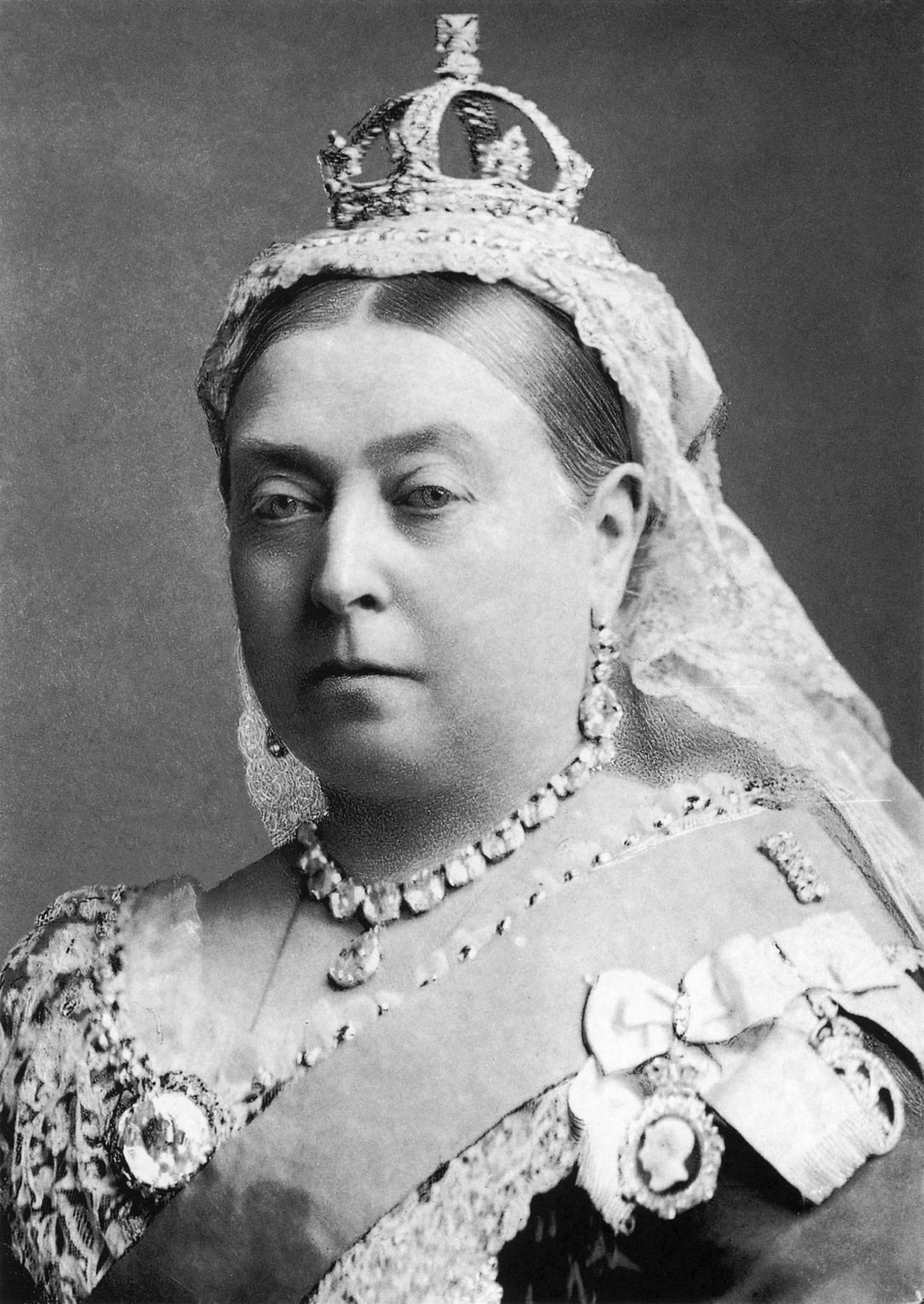 But what about Streetsville’s Queen?

The road was originally identified as the Road Allowance between the Fourth and Fifth Concessions, West of Hurontario Street.

It does not exactly roll off the tongue.

Sometime around 1827 (exact date is uncertain), Timothy Street contracted surveyor John Goessman, who likely to surveyed a town plot on Street’s properties along the Credit River in what would become Streetsville.

Although the survey itself appears to have not been officially registered, Goessman used the name of “Streetsville”, and Timothy Street began selling building lots along the aforementioned Road Allowance.

Streetsville entered into a substantial growth period in the years that followed. It is unknown if road names were created at that time, although there are references to Queen Street in the 1830s.

We are on solid footing by 1853 with the Hugh Block survey plan for Streetsville, registered on April 21, 1853 by John Barnhart.

This plan includes formal reference to the name of Queen Street.

It just does not indicate if the road was newly named in 1853, or if the name was already in use. 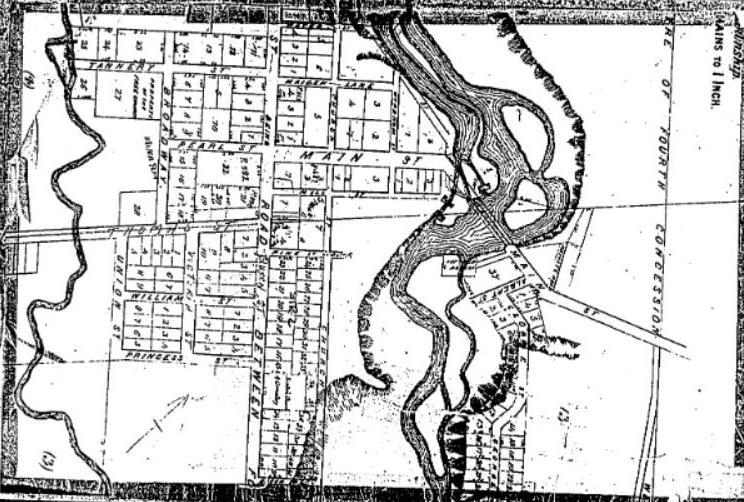 If it was named in the late 1820s or early 1830s, then it was likely named for Queen Adelaide, not Queen Victoria. Adelaide of Saxe-Meiningen (born Adelaide Amelia Louise Theresa Caroline, 1792-1849) was Queen Consort of the United Kingdom and Hanover between 1830 and 1837 as the wife of King William IV.

However, it is possible that the street was named by Timothy Street to differentiate his business interests.

In 1820-21 he had opened a saddlery on King Street in York (Toronto). Perhaps using “Queen Street” might have highlighted the different locations for his enterprises.

The street may also have been named in reference to the village itself, as the village was referred to locally as “Queen of the County” due to its growth and prosperity.

However, if Queen Street in Streetsville received its formal name as part of the Hugh Block survey in 1853, then it is most likely named for the ruling monarch at that time, Queen Victoria.

Things are much simpler when looking at the origin of a third street named for a queen – this one in Lorne Park. Queen Victoria Avenue was originally a farm lane on McGill-Ellis and Burns farms that were subdivided in 1913.

The road was named in honour of  Queen Victoria, although after her passing.

*This article was also found in Modern Mississauga:

United Empire Loyalist John Barnhart built this house around 1832 as a wedding gift for his daughter, Minerva, and her husband William H. Paterson. Minerva operated a school for young ladies here. Paterson was a merchant who came to Streetsville around 1825. The property was acquired by Lewis Moffatt in 1856, who in turn sold…