Heritage Mississauga is delighted to host an exhibit from PAMA in the Discovery Centre Gallery at The Grange (1921 Dundas Street West, Mississauga) 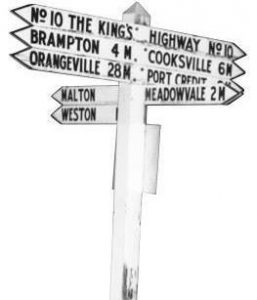 How often do you stop to think about the roads you travel on? Have they always been four lanes and paved? Or were they dirt roads running between farmer’s fields? Or even through old-growth forest? For almost 200 years, local residents have travelled, lived, and worked along Hurontario Street. This exhibition gives you a unique chance to explore the history of a familiar local road.

“Hurontario Street: Linking Peel” explores the history of the road, its connection to the surveying of Peel, and the many stories along the street. A series of panels offer a “then and now” glimpse of the street in Port Credit, Cooksville, the City Centre district, and north Mississauga. Some scenes remain familiar, like the old St. Lawrence Starch office, while others are vastly different, like the intersection of Hurontario Street and Eglinton Avenue.

The exhibit centres on a large historic aerial photograph of Hurontario Street through Mississauga, with a variety of short stories of people and businesses along the route, like Canada’s first cloverleaf highway interchange, an oil derrick at Cooksville, the 1980s proposal for a domed stadium, and settlers leaving to defend against the Fenian Raids.

Free admission. The exhibit is open from Tuesday to Friday, 9 am – 5 pm, and until 7:30 pm on select Tuesdays. For more information please contact Heritage Mississauga at 905-828-8411 x29 or [email protected] 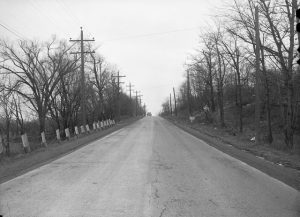 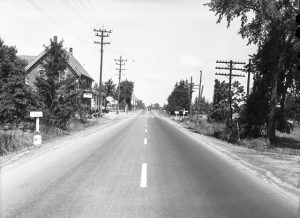 Welcome to our 52nd installment of “Ask a Historian”. Join Historian Matthew Wilkinson for our next episode of “Ask A Historian” on June 10th on our YouTube channel. This week Matthew welcomes guest Scott Gillies as they discuss the history, and poetry, of cheese and the fascinating story of the Ingersoll Cheese & Agricultural Museum….

In Memory of a friend of Heritage

In memory of Benson (Ben) Madill (1915-2013) In his 99th year passed away peacefully after a full and rewarding life on October 30th, 2013 at Groves Memorial Hospital, Fergus, Ontario. Ben leaves behind his beloved wife of 66 years, Marjorie (Tipping). He will always be remembered by his daughters Bessie (Alan) Harriston and Shirley (Jim)…