Today we celebrate #LincolnAlexanderDay on what would have been his 100th birthday.

Lincoln Alexander, an Honourary Patron of Heritage Mississauga, left an indelible mark on the history, heritage, and landscape of Mississauga and the country.

Alexander has long been considered a trailblazer and was the first Black Canadian member of Parliament (1968), Cabinet minister (1979) and Lieutenant-Governor (Ontario, 1985).

Educational institutions have adopted his name including Lincoln M Alexander Secondary School in Mississauga and Lincoln Alexander School of Law at Ryerson University.

Alexander was a dedicated human rights advocate and in 2000 was appointed chair of the Canadian Race Relations Foundation, an organization dedicated to ending racism and racial discrimination in Canada.

In his speech before the House of Commons as MP of Hamilton West on September 20, 1968, he stated: 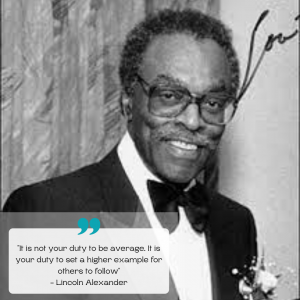 “I am not the spokesman for the Negro; that honour has not been given to me. Do not let me ever give anyone that impression. However, I want the record to show that I accept the responsibility of speaking for him and all others in this great nation who feel that they are the subjects of discrimination because of race, creed or colour.”

He was subsequently re-elected four times, serving a total of 12 years.

Born on January 21, 1922 in Toronto, Lincoln Alexander’s story reflects the fortitude and determination shown by so many immigrant parents that have come to Canada and who strive to build a life of opportunity for their families and contribute to making this country a better place.

Lincoln Alexander has left an inspiring legacy that instills a sense of pride in all Canadians.

Have you seen the historic one-room historic schoolhouse that stands in the heart of the City of Mississauga? Have you ever wondered about its history? The late Benson (Ben) Madill (1915-2013) left behind a treasure trove of memories and recollections about life and time in historic Mississauga (particularly focused on the rural community of Britannia)…

Way Back Wednesday: The History of Lessard Lane

Lessard Lane is a modern subdivision road that runs north off of Old Derry Road, just to the east of Meadowvale Village Heritage Conservation District. The road is named in memory of former area resident, Major-General Francois-Louis Lessard (1860-1927), who owned the property on which the subdivision was built. Lessard was born in Quebec City,…

In celebration of #NationalAstronautDay, we would like to recognize some of our iconic Canadian Astronauts and explore their connection to Mississauga. One of Canada’s most well-known Astronauts is Dr. Roberta Bondar. On January 22nd 1992, Dr. Roberta Bondar became the first Canadian woman and the world’s first neurologist in space, launching aboard the Space Shuttle…

Happy St. Patrick’s Day! Traditionally it is a time to gather and enjoy each other’s company – perhaps something that we have gained a new appreciation for over the past year. I remember St. Patrick’s Day last year. A small family gathering, green things, laughter, uncertainty as the news of the pandemic unfolded around us….