The Battle of Sandwich was not in fact a battle for a lunch favorite, but in actuality an invasion of Windsor, then known as Sandwich, by American Brigadier-General William Hull on July 12, 1812. 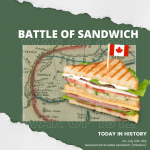 After around a month of preparation in both the United States and Canada, Hull initiated the first opener in the land war. Up until this point, there were small naval and boarding actions across the Great Lakes, but no serious major land maneuvers against an opposing side. Crossing east across the Detroit River into Canada, Hull captured the settlement of Sandwich (now Windsor, Ontario) without a battle. The meagre contingent of militia on standby retreated as they saw the American force cross the river. Hull framed his entry into Sandwich, and by extension Canada, as a liberation of its populace, many of whom were recent American immigrants to Upper Canada.

He issued a proclamation promising the protection of the populace and its emancipation from “tyranny and oppression.” Responses varied, as they generally did among Upper Canada’s population throughout the war. Some complied with the occupying force and remained in their homes, some collaborated with the Americans, and a few chose to return to the United States.
Aside from being the first invasion of Canada in the war, the occupation of Sandwich inaugurated Hull’s campaign. Much of the early fighting of the war would center on this campaign and its theatre of Northwest Michigan/Southwestern Upper Canada. Although Hull’s first action in taking Sandwich was a success, his campaign would eventually come to an end by August of the same year.

Way Back Wednesday: The History of Mississauga’s Sawmill Creek

Before Christmas we received an inquiry asking about the name origin of Sawmill Creek. The answer is a fascinating look at local history, and how place names remain on our landscape from many years ago. In short, the creek takes its name from being the source of power for a sawmill, or possibly two sawmills….

On May 17 1945, Alice Campbell was found dead on the floor of her small Port Credit grocery store. The blood emanating from her mouth indicated she had been strangled by an intruder, while the interior of her store and living space were in complete ruins and emptied of all cash. Alice Campbell was 75…