On Sunday November 28, 2021 the first memorial in Canada dedicated to the Polish airmen, ground personnel and Women’s Auxiliary Air Force serving in the Polish Air Force alongside RAF during the Second World War was unveiled outside the John Paul II Cultural Centre in Mississauga.

“The Spiral of Victory” monument honours the critical role Polish servicemembers played in defeating the Germans in the Second World War.

The monument was designed by Polish Canadian artists Ania and Wojtek Biczysko and is made of stainless steel and is comprised of two main parts: The Obelisk, which is a slender pyramid on a triangular base, with inscriptions and symbols on all three sides, and the dynamic, upper composition which includes sculptures of three aircrafts symbolizing “battle in the air”.

Heritage Mississauga celebrates the incredible contributions of the Polish servicemembers and explores their connections to Mississauga.

Boleslaw Orlinski was a Polish aviator, military, sports and test pilot. Born on April 13th, 1899 in Niwerka, Podolia (now Ukraine), he first began his military career during the First World War where he fought in the Russian Army as a non-commissioned officer in the infantry regiment. After the Poland’s gained its independence after the First World War, he joined the newly formed Polish army where he served in the calvary. He served in these units during the Polish-Soviet War and then joined the Polish Air Force.

It was in the air force that he fell in love with flying, a love that would last his entire life. He completed his pilot training in Bydgoszcz and Grudziadz, Poland and became an instructor in Grudziadz 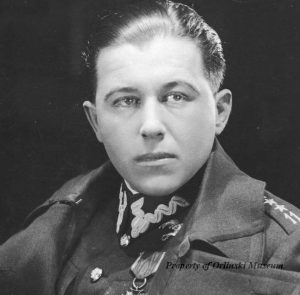 This would go down in history as one of the first Trans-Siberian flights in history. On the way back, the plane suffered damages that caused the lower wing break and crack the propeller. To finish the flight, they had to shorten the opposite wing and repair the propeller with glue and wire. For the trip, Orlinski was awarded the Japanese Order of the Rising Sun 6th class, French Legion of Honor and was promoted to captain. In 1928, he quit the service and became a test pilot for various planes with the Polish PZL aviation in Warsaw. Apart from his test pilot work, he took part in numerous aviation contests and presentation of Polish aircraft board.

Orlinski volunteered for the Polish Army at the outbreak of the Second World War. As Poland fell, he escaped to Great Britain via Yugoslavia, Italy and France, where the remnants of the Polish Air Force were serving. He was too old to become a fighter pilot and so he became an instructor. In 1943, he joined the No. 305 Polish Bomber Squadron, where he was flying the de Havilland Mosquito fighter-bomber. He later became the commander of the Squadron where his rank was Wing Commander in 1944. He flew 49 operational sorties, mostly at night. From 1 February 1945 until the end of the war in Europe, he was kept out of combat.

After the war he settled in Mississauga, Canada in the Wawel Villa Retirement Home where he died at the age of 93 and was buried in Wroclaw, Poland. His last wish was to have a museum erected to honour the sacrifices made by Polish veterans in Canada and bring their stories to life. After his death, the Orlinski Museum was founded in his honour at the Wawel Villa Retirement Home. 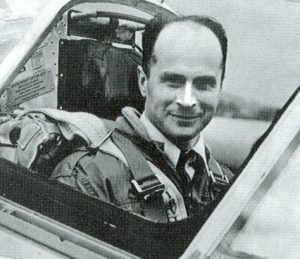 Janusz Zurakowski was born in 1914 in Ryzawka, Russian Empire. He enrolled in the Polish Air Force Officer’s School in Lublin in 1934. He served as a fighter pilot as part of the 161 fighter Squadron in Lwow and in 1939 he served as a flying instructor at Deblin Air base in Poland. On September 2, 1939, Janusz Zurakowski, or Zura as he was popularly known, took off from the airbase at Deblin, Poland in a PZL P-7 and engaged 7 Dornier 17 planes of the German air force. When the Soviets invaded on September 17th, the flying personnel was ordered to evacuate to Romania. Zura joined the Polish forces in France and eventually made his way to Britain where he joined the Polish squadrons serving under the Royal Air Force.

He engaged in the Battle of Britain and flew his first Spitfire in 1940. In his first encounter with German planes, he was able to shoot down a Messerschmitt 110. On March 24, 1940, Zura’s Spitfire was damaged by enemy fire and he had to bail out. When he landed on the Isle of Wight, he was stopped by a Home Guardsman who took him for a German. He was saved by his 1st Lieutenant who pulled up in a jeep. Despite being wrongfully declared dead by the authorities, Zura returned to fight another day and was promoted to Squadron Leader. For his service, Zura was awarded the Virtuti Militari cross, Poland’s highest military honour.

In 1944, Zura trained to be a test-pilot and tested the de Havilland Vampire, the Gloster Meteor and the delta-shaped Gloster Javelin. In 1952, Zura moved to Canada where he worked as a test pilot for Avro-Canada. In Malton, he broke through the speed of sound in a CF-100 Mark 1. Later in 1958, he made the first flight of Avro Arrow CF-105, a supersonic interceptor, in Malton. In 1959, after the termination of the Arrow project, Zura and his family moved to Barry’s Bay where he established the vacation resort known as Kartuzy Lodge. In 1973, Zura was inducted into Canada’s Aviation Hall of Fame.

Today, in Barry’s Bay there is a street named Arrow Drive and in the centre of town, there is a park known as Zurakowski Park, which includes a scale model of the Arrow and a statue of Zura, a lasting testament to a true Polish and Canadian legend.

Polish born Wladyslaw Potocki served with the Polish Air Force and then escaped after collapse of Poland during the Second War. He then joined the Royal Air Force (Polish Squadrons) in 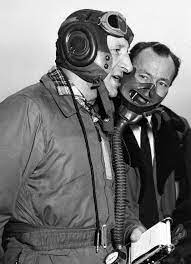 England. After the war, he graduated from the British Empire Test Pilot School. Following emigration to Canada in the early 1950s, Potocki was engaged as a test pilot with “Avro Aircraft Canada

Ltd” in Malton, Mississauga. “Spud” Potocki took over Arrow test flights following Jan Zurakowski’s retirement from active test flying in Sept 1958. He accumulated the highest number of hours of the four pilots who flew the first five Arrow aircraft. It was recorded that he reached a speed of Mach 1.9 in one of the Arrows, but it was rumoured that he actually reached Mach 2.0.

Following the cancellation of the Arrow program in 1959, Potocki is the only pilot that “flew” the experimental Avrocar. After the closing of Avro Canada he joined North American Rockwell as a test pilot. Then a career-ending accident unrelated to flying, in which he lost an eye, Potocki and his wife purchased and operated a motel complex and business in Columbia, Ohio, where he died in 1996.

Polish pilot Stanislaw Sadowski (1917-1997) joined the Polish Air Force at the age of 16 years old in 1933. His first major mission was the September Campaign in 1939. After the fall of Poland, he escaped to England.

He was assigned to the No. 307 Polish Night Fighter Squadron. He served as a radio navigator onboard Mosquito bomber planes. He participated in many operations during the Second World War, such as the Battle of Atlantic where he was credited with destroying three enemy planes.
After the war, Sadowski settled in Canada and in 1977 he was elected as the President of the Warsaw Wing, an organization located in Toronto. He retired to the Wawel Villa Retirement Home and passed away in 1997. He is remembered as an integral member of the Polish Canadian community. His contributions to honouring Polish heritage abroad in Canada made him well respected and loved.

Marceli was born to Polish parents in Brazil in 1920. In 1941, after completing his first year of studies, he volunteered for the Polish Armed Forces in Great Britain. He began his military service in the 16th Tank Brigade in Alyth, near Perth, Scotland. On November 8, 1941, he was transferred to Blackpool in England and assigned to the Polish Air Force. After training to prepare for combat

operations and teaming up at the 18 Operational Training Unit (OTU) in Bramcote, transferred to the 301st Bomber Squadron “Pomeranian Land” in Hemswell. In 1942 and 1943 he participated in combat missions and bombed targets in Germany, the Netherlands, Belgium, France and Italy. He graduated from the School of Infantry and Motorized Cavalry in Scotland and on September 13, 1943 he was promoted to the rank of lieutenant in aviation, awarded to him by President Władysław Raczkiewicz. On March 1, 1945, he was appointed lieutenant of aviation. He made 30 sorties (205 hours in total). He was an adjutant at the Bomb Distribution Point. He completed pilotage and then the Pilot Instructors Course. Out of commission to the Ministry of Aviation, he worked in the Demobilization Department in London until the end of 1946.

Demobilized in January 1947, he returned to Brazil and in 1955 he moved to Canada. He worked for 32 years at the Toronto City Hall as an accountant and then head of the personnel office. In 1956 he joined the Association of Polish Aviators Skrzydło “Warszawa” in Toronto. Former president of the Association of Polish Combatants in Canada at Circle 20 in Toronto. On May 8, 2000, by the order of the Minister of National Defense, he was appointed major, in 2012 as a lieutenant colonel and in 2020 as a retired colonel of the Polish Army. 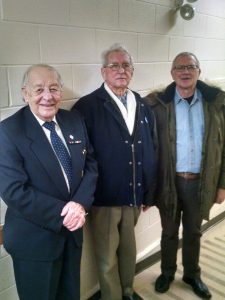 In his lifetime, he was awarded many decorations including the Virtuti Militari, Poland’s highest military honour. He always emphasized that “Poles were not ashamed of being Poles, because we have a beautiful history and we should be proud of it”. Ostrowski was active in many Polish organization in the area and visited the Orlinski Museum multiple times. The last of his visits was in January 2020, when he gifted the museum with much of his memorabilia for the education of Mississauga residents and Poles alike.

Wanting to have a permanent monument to the sacrifices made by Polish pilots, Marceli and his fellow veterans proposed and partially inspired the monument to Polish Air Force veterans outside the John Paul II Polish Cultural Centre in Mississauga.

However, he did not live to see its unveiling and passed away on July 7th, 2020.

Heritage Mississauga would like to thank the Orlinski Museum for sharing their archival materials to help us honour and commemorate the numerous Polish servicemembers who served in the Second World war.

Images courtesy of the Orlinski Museum, Heritage Mississauga, and http://thetartanterror.blogspot.com/

Welcome to our twelfth installment of “Ask a Historian”. Every week Heritage Mississauga will be taking questions about the history and heritage of Mississauga which our Historian, Matthew Wilkinson, will answer on Thursday afternoons. #ApartTogether, Heritage Mississauga is the source for inquiries and curiosity about our beautiful city as we continue our mandate to research,…

In connection with National Indigenous History Month in June, we thought we would explore a relatively lesser-known connection to Indigenous history here with the City of Mississauga. But first, we have to paint the background picture.   The Town of Mississauga came to be on January 1, 1968. Our former name was Toronto Township, but we…