The QEW is an important highway that runs from Toronto to the Niagara Peninsula. The highway is the oldest inter-city divided highway in Canada and has arguably been one of the most influential highway developments in Ontario’s history. The highway passes through the heart of Ontario’s largest industrial and commercial centres and provides vital access to the United States at Niagara Falls and Fort Erie.

By the 1930s, inter-city traffic volumes between Toronto and Hamilton had begun to overwhelm Highway 2 (Lakeshore Road), and a new highway corridor was planned. The Middle Road, a minor rural road located about 2 km north of Highway 2 through Peel and Halton, was selected as the route for the new highway. Construction began in the early 1930s to convert this minor rural road between Toronto and Burlington into a four-lane highway. Originally, the new road was planned as a four-lane undivided highway, but a landscaped median was quickly added along the highway in an effort to improve traffic safety. The new Middle Road Highway was opened in several stages between 1932 and 1937. The new highway was completed between Toronto and Hamilton in the summer of 1937, and included a full cloverleaf interchange at Hurontario Street. The new Middle Road was extended to Niagara Falls, via Grimsby and St. Catharines, in the late 1930s.

While the new Toronto-Niagara Falls Highway was the pinnacle of 1930s highway engineering and innovation, the name “Middle Road” did not inspire an image of grandeur. While the Ontario Government was considering new names for the highway, an idea surfaced to re-dedicate the Middle Road Highway as the “Queen Elizabeth Way”, to commemorate the first Royal Visit to Canada by King George VI and Queen Elizabeth (The Queen Mother). Queen Elizabeth was delighted with the honour and agreed to attend a special dedication ceremony in St. Catharines on June 6, 1939. The dedication ceremony took place near the Henley Bridge in St. Catharines. After the ceremony concluded, special decorative sculptures and elements were added to the Henley Bridge to commemorate the 1939 Royal Visit. The QEW was quickly completed and was open to traffic to Niagara Falls by late 1939. The QEW was extended from Niagara Falls to Fort Erie in 1941.

The construction of a high-level bridge to carry the QEW across the Burlington Beaches had been considered as early as the 1930s, but it was not until the 1950s that the proposal became a reality. Until 1958, all QEW traffic crossed the Burlington Canal on a lift bridge, which was frequently opened to allow ships to enter Hamilton Harbour. Traffic jams had always been a serious problem on Beach Boulevard, so it was clear that a high-level bridge was needed to fix the traffic bottleneck. The Burlington Beach Skyway (now known as the James N. Allen-Burlington Beach Skyway) was opened in 1958. The Skyway was twinned in the 1985 to provide additional capacity along the QEW.

By the 1950s, it became obvious that the QEW was inefficient as a non-controlled access highway. While there were some interchanges along the highway, there were many at-grade intersections and most of the busier intersections had traffic signals installed. Throughout the 1950s and 1960s, the at-grade intersections were closed off along the QEW and replaced by overpasses and proper interchanges. Service roads were constructed along the highway to provide access to adjacent properties. The highway was widened to six lanes from Toronto to Burlington to accommodate the ever-increasing traffic volumes. The section of the QEW from Highway 427 to the Humber River was reconstructed as an 8 to 10-lane freeway in the late 1960s and early 1970s.

In 1997, a portion of the Queen Elizabeth Way from Highway 427 to the Humber River was transferred to the City of Toronto and re-designated as the Gardiner Expressway.

The QEW is the only freeway in Ontario which does not have an official route number. Since 1939, the highway’s legal designation has always been “The Queen Elizabeth Way”, although early references used “Queen Elizabeth’s Way”. 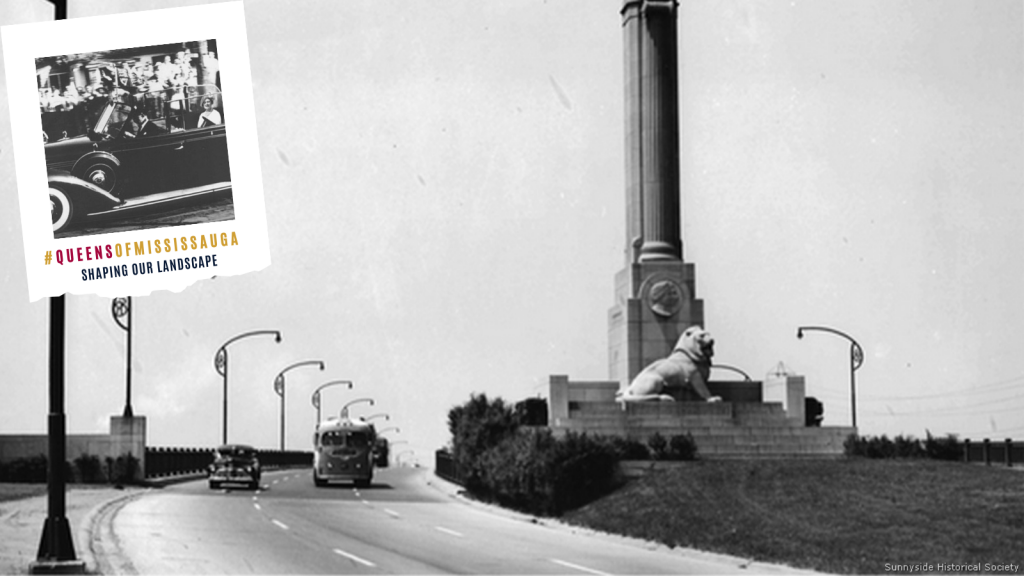 Today is National Flag of Canada Day which commemorates the raising of the Maple Leaf Flag for the first time on February 15, 1965. DYK the incredible story of our flag and its connections to Mississauga? At noon, on Saturday, February 15th, 1965, 10,000 people gathered in Ottawa to witness the historic raising of the first Maple Leaf…

Way Back Wednesday: Wherever “there” may be; finding Mississauga outside of the city

As with previous articles on this theme, whenever I travel, I invariably find myself drawn to making connections back to Mississauga. We recently took a few days to get away and visit Ottawa, which is a place that our family always loves to explore. Our first “connect” to Mississauga came along the route there. Passing…

During Heritage Week, from February 19 to 27, you will have a chance for a fascinating exploration along the course of Mississauga Road. The City of Mississauga Culture, Museums and Parks teams are working in collaboration with Heritage Mississauga to present an outdoor recreation-themed Heritage Week campaign. Daily social posts will be shared by Culture,…