The Darker Side: The Jekyll and Hyde Chicken Farmer 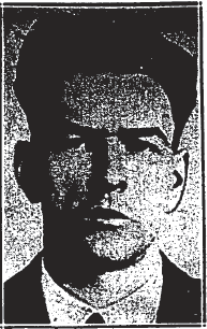 Morris Gershon, a well-known Toronto poultry buyer, and his assistant, Murray Baker, went missing on June 19th, 1939. They have never been found, although police suspected that the pair met with foul play and were murdered. And they had their suspicions of who was responsible.

Gershon’s abandoned truck was found along Highway 122 (Royal Windsor Drive), between Clarkson and Oakville, a few days later. Also in the summer of 1939 police were challenged by an “epidemic of robberies” of tourists in Burlington and Oakville.

The robberies took place largely at night and the victims were accosted in their parked vehicles. The assailant was dubbed the “Parked Car Bandit”.

There was, at first, little evidence to connect the disappearance of Gershon and Baker to the robberies together.

In the early morning hours on Friday, September 22nd, 1939, 21-year-old Bruce Kivell of Port Credit and 17-year-old Glenna Stoutt were confronted at gunpoint while parked on a sideroad near Erindale. Kivell and Stoutt had met that night at a dance at the Credit Valley Golf Club, and had stopped to talk on their drive home.

They were surprised and blinded by a flashlight. Their assailant, who demanded money, forced the young couple to “drive around” for two hours while boasting of other robberies in the area.

Eventually, just south of Streetsville along the Town Line (now Winston Churchill Boulevard), their assailant ordered Kivell and Stoutt out of the car, and instructed Stoutt to tie Kivell’s hands behind his back. A struggle ensued, the gun went off, and Kivell fought for his life.

Stoutt took off her shoe and began hitting their assailant on the head and face while he struggled with Kivell. The struggle was over. Their assailant was incapacitated in the ditch. Kivell and Stoutt seized his gun, and perhaps in a moment of questionable wisdom, loaded their prone assailant into their car and drove to the home of Provincial Constable Fraser Bell at 2:00 am, who confirmed that the man was dead.

The dead man was 37-year-old Wilfred E. (“Earl”) Baker, who lived on Lorne Park Road near Clarkson. Baker was a poultry farmer. Morris Gershon had dealt with Earl Baker in the past, and according to the Gershon family, he found that Earl Baker was a hard man to deal with and that he disliked going to his property.

Gershon, together with Murray Baker (unrelated to Earl Baker), was on his way to Clarkson on a buying trip when he disappeared. Earl Baker was brought to the attention of local police by a neighbour who was positive that she had seen Gershon visit Baker’s farm just before he was reported missing.

Earl Baker was questioned by police but denied any knowledge or involvement. Other neighbours also had their suspicions of Earl Baker. While Earl Baker lived alone, a recluse, after the death of his mother, his house and property were well cared for and neighbours commented that he loved flowers.

Baker rented the property from Reginald Colleton. However, what concerned neighbours was that he rarely left his property during the day, but departed only at night, often only returning in the early morning hours. Baker was visited by “mysterious strangers” at all hours, and neighbours referred to him as “erratic”, “unbalanced”, “strange” and a “real Jekyll and Hyde individual” following his mother’s death.

While he was formerly bright and cheerful, neighbours felt that “something unusual” was going on and that they “lived in fear” at night. Police “kept a watch” on Earl Baker, initially in attempts to connect him with the Gershon disappearance, but soon descriptions of the “Parked Car Bandit” led police to suspect him in these robberies as well.

That all ended in the early morning hours in a ditch south of Streetsville, with the death of Earl Baker.

In the days following his death police and investigators descended on Baker’s chicken farm on Lorne Park Road. Items found in the house connected to some of the “Parked Car Bandit” robberies.

A watch was also found on the property, apparently hidden under a chicken nest, which was later identified as belonging to Morris Gershon. Despite numerous searches of the property, and in the surrounding area, no trace of Morris Gershon or Murray Baker has ever been found, no motive been identified, and prior to his death Earl Baker had never been charged in connection to their disappearance.

Congratulations to Toronto Pearson Airport for being named “Best Large Airport in North America serving more than 40 million passengers” by Airports Council International (ACI) World, the global trade representative of the world’s airports. Built in 1937 as an alternate to the downtown Toronto Island Airport, Toronto Pearson Airport was originally known as Malton Airport….

Way Back Wednesday: The History of Totoredaca Park, Also Known As “Toto Park”

There is a leash free dog park in Northwest Mississauga known affectionately as “Toto Park”. Totoredaca Park has a long and interesting story, and the leash free dog park is but the latest chapter of its story. Children’s day camps began in Toronto Township (Mississauga) in the 1950s, under the direction of former Recreation Director,…