In Search of the O’Connor Family

A famous author once remarked: “Search for history: you’ll never find a greater reward.” This may be true, but there are moments in any search when you find nothing but dead ends, and the elusive “reward” becomes more of a frustration, at least in historical terms. It is almost as if the sands of time are trying to keep a story hidden from inquiring minds. In part, such is the story of the O’Connor family from the “Catholic Swamp” in Mississauga.

Bartholomew Crescent is named for an early settler, Bartholomew O’Connor. Nearby O’Connor Park is also named for this family. The patriarch of the family, Bartholomew O’Connor, arrived in this area around 1819. Local legend indicates that the young Bartholomew O’Connor and his brother-in-law, Charles O’Hara Jr., walked over 40 miles to the town of Dundas and persuaded Father O’Reilly to come to the “Catholic Swamp” to celebrate mass in 1819. The first mass for the burgeoning crossroads community was held in the O’Hara log cabin. For many of the early settlers, this was likely the first mass they had observed since leaving Ireland. Visits by travelling ministers continued sporadically until 1823, when a congregation built their own church.

As for Bartholomew O’Connor himself, he was born around 1801 in County Armagh, Ireland, and came to Canada with his siblings, Michael (born c1806), and Mary (born c1810). We can only piece together fragments of the O’Connor story however, as many of the resources we normally rely upon are quite vague in regards to this family.

The O’Connor siblings, led by young Bartholomew and his wife, Sarah O”Hara, arrived in 1819, Charles O’Hara had also married Bartholomew’s sister, Mary, creating even stronger family ties. Bartholomew and Sarah had four children that we can identify: Isabella (born c1823), Michael (born c1825), Charles (born c1830) and Ellen (born c1841). It is likely that they had more children, given the gaps in the dates of birth for these listed children.

According to local histories, Bartholomew at first lived and worked on the farm of his cousin, Peter O’Hara, before acquiring land of his own. Bartholomew acquired 50 acres on December 13, 1854 from Peter O’Hara in the East Half of Lot 3, Concession 10, in the New Survey of Trafalgar Township. Bartholomew then acquired a 50 acre grant of land on May 1, 1855 from the University of Toronto, immediately abutting the property he had acquired earlier. In modern terms, the 100-acre parcel of land owned by Bartholomew was located on the west side of Tenth Line, south of Thomas Street, and includes a park which carries the family name today.

On January 8, 1861, Bartholomew sold his 100-acre farm to his son, Michael, who is said to have built a substantial family homestead in 1878, replacing the earlier log cabin. As for Bartholomew and Sarah, they passed away in 1874 and 1862 respectively, and are buried at St. Peter’s Roman Catholic Cemetery on Ninth Line.

Bartholomew’s son Michael, who owned the original family farm, had at least two children: John and Katherine. John relocated to the Dixie area of Mississauga, married Ellen O’Leary from Port Credit, and was the father of the internationally renowned “Singing O’Connor Sisters”, who were vaudeville stars from 1910 until 1937. The sisters were Mary, Anna, Ada, Kathleen, Vera and Nellie. The homestead farm left the O’Connor family in 1956.

Another of Bartholomew’s sons, Charles O’Connor, acquired another farm along Ninth Line, just north and east of the family homestead. He had at least one daughter, Kathleen (1885-1928), who married William Frederick Sanford of Toronto Township (Mississauga). However, this is where we lose the thread of the O’Connor family and their properties along Ninth Line.

The O’Connor family was connected with several other early families in what is today the City of Mississauga, namely the O’Gorman, O’Hara, O’Leary, Orben, Sandford/Sanford and Woods families. 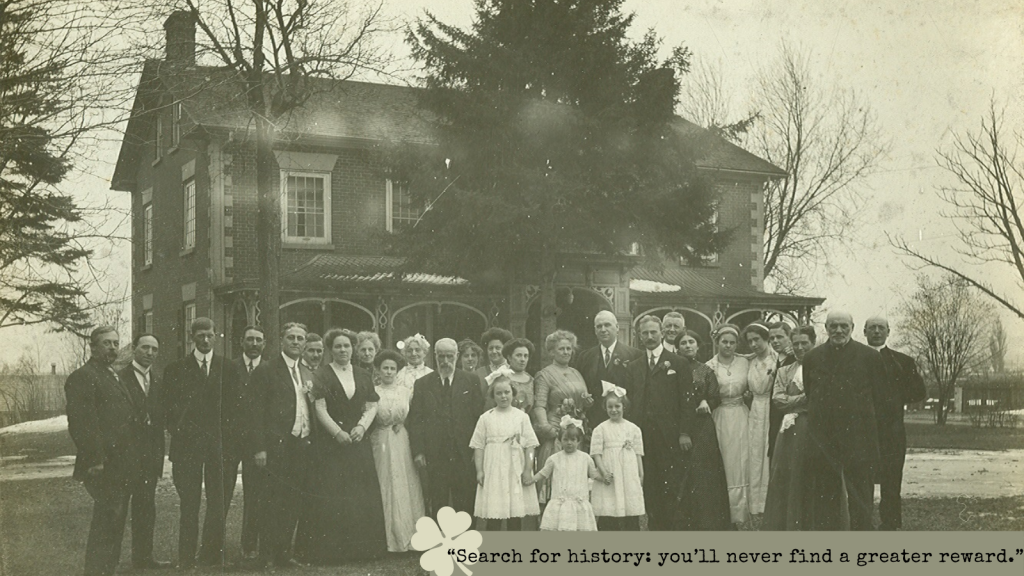 In short, the search is ongoing, and we hope to uncover more on this family, and other families who settled nearby. If you have any information or pictures relating to the O’Connor family or other early settling families in this area please do not hesitate to contact us at [email protected].

Welcome to our 32nd installment of “Ask a Historian”. Join Historian Matthew Wilkinson on our YouTube channel for the latest episode of “Ask a Historian” on Thursday January 14th at 4:00 p.m. In this weeks episode, Matthew takes a stroll along some of the historic streets of Mississauga and examines the families that made their…

Way Back Wednesday: The History Behind The Civic Holiday

The Civic Holiday is celebrated on the first Monday of August and it is a public holiday in some provinces and territories, although it is not a statutory holiday. When not given a local name, it is often referred to as the “Civic Holiday”. The Toronto Caribbean Carnival, formerly known as Caribana, coincides with this…

The Battle of the Atlantic was the longest continuous battle of the Second World War. Just hours after Britain formally declared war on Germany on September 3, 1939, the battle for the Atlantic began. A German U-30 submarine torpedoed the SS Athenia just off the coast of Ireland. The passenger ship was en route to…