60 Years Ago Storm Made Landfall

Hurricane Hazel was the deadliest and costliest hurricane of the 1954 Atlantic hurricane season. The storm killed as many as 1,000 people in Haiti before striking the United States near the border between North and South Carolina, as a Category 4 hurricane. After causing 95 fatalities in the US, Hazel struck Canada as an extratropical storm, raising the death toll by 81 people, mostly in Toronto. As a result of the high death toll and the damage caused by Hazel, its name was retired from use for North Atlantic hurricanes.

While most of the casualties and destruction caused by Hurricane Hazel in Canada were focused o Toronto and Holland Marsh, Toronto Township (now Mississauga) saw its share of flooding and destuction, with roads, bridges and dams washed out. 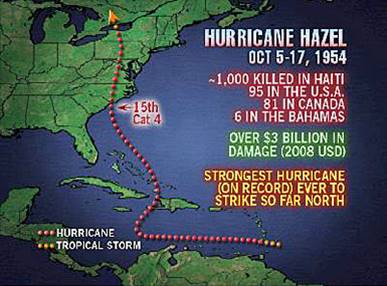 Way Back Wednesday: From the Emperor of China to Lorne Park: Remembering the Southern Belle

Continuing our theme on the era of the steamships, another well-known passenger steamer that brought summer visitors from Toronto to Port Credit, Lorne Park, Oakville, and all recreational and amusement points from Niagara and back was the Southern Belle. But like many, the Belle had begun life in another vocation and under another name. The…

The former Barker General Store in Erindale was built in 1921-22, following the great Erindale fire of 1919. It served, originally, as both the family home of Marjorie and Delmar Barker  (my grandparents), and the Barker General Store. The square “tower” portion was added in 1938 for expanded living space. The building was built on…

Ruth Teverson Hussey (1915-1984) immigrated from England to Clarkson in 1954 and would come to be known as the “guardian angel of Rattray Marsh”. She loved nature and animals from her childhood and took these interests with her to Clarkson. She worked as a veterinarian and dog breeder, however her falling eyesight forced her to…