Today is National Flag of Canada Day which commemorates the raising of the Maple Leaf Flag for the first time on February 15, 1965.

DYK the incredible story of our flag and its connections to Mississauga?

At noon, on Saturday, February 15th, 1965, 10,000 people gathered in Ottawa to witness the historic raising of the first Maple Leaf flag, bringing to an end the “great flag debate” that saw Canada adopt its first true national flag. The first flag raised was on a ceremonial flag pole outside of Centre Block. Later that day, a large banner was unfurled atop the Peace Tower. It was revealed, years later, that the flag atop the peace tower was made at the Canadiana Textile Print Works in Lakeview, now part of Mississauga.

Ottawa, 1963
Rumours had been surfacing lately that Prime Minister Lester B. Pearson had made his personal choice. Hundreds of designs had been submitted to a multi-party parliamentary committee. The Prime Minister’s favoured submission had three red maple leafs and a blue, vertical stripe down both sides. Even if there was to be no alliance of opposition there was still no guarantee that Pearson’s flag would win the vote anyway. Not all Liberals sided with their PM.

Toronto Township, 1964
Robert Greven was president of Canadiana Textile Print Works. Greven’s company was just one of many in the commercial screen-printing business in Canada; and they were all vying to win the contract to screen the new official Canadian flag, whenever the politicians got around to decide what it should look like. It would be a prestigious contract, and would naturally ensure future contracts for the winning bidder. Despite this, Greven decided to play cautiously. There was still too much indecision in Ottawa over which design would be selected by the parliamentarians. It seems that all parties had finally come to accept the recommendation of the flag subcommittee to adopt a maple leaf, but there was still uncertainty over the size, shape, colour and number of leaves. Greven decided he’d rather be the last one to get his flags to the stores rather than be the first one with the wrong flag. Greven’s patience won out. Canadiana Textiles was one of the companies to win a contract to produce flags for government buildings. Considering the large number of government buildings, post offices and military bases to be equipped with new flags, Canadiana Textiles was only one of many companies to screen the new flags.

On the evening of February 14, 1965 the Red Ensign was lowered one last time and, the next day, Canada’s new flag was raised in an official ceremony. But who made the flag? No one recorded that information at the time. A flag was picked at random. It didn’t matter much to Greven at the time. Just winning a contract to make more flags was reason enough to celebrate. At peak production, Canadiana Textiles was turning out 20,000 flags a day.

Lisbon, 2005
The first flag flew from the Peace Tower for just a few hours before it was lowered. From there the flag was thought to have disappeared to some unrecorded location, even though an order from Cabinet declared that it was to be given to caretakers for a proposed national museum. As it turns out, the Speaker of the House of Common at the time, Lucien Lamoureaux, acquired it. In 2005 that first maple leaf flag was found in the Lisbon, Portugal home of Lamoureaux’s widow, Elizabeth Hoffman-Lamoureaux. After his record term as speaker,
Lamoureaux became ambassador first to Belgium, then to Portugal.

Hoffman-Lamoureaux donated the historic flag back to the Canadian government. Upon its return the flag was catalogued. A curatorial assistant recorded the text on two tags attached to the hoist of the flag. One read: “Department of Public Works” and a second was the manufacturer’s mark. It read: “Canadiana Textile Print Works, Rangeview Road, Port Credit”. Made in Mississauga indeed! 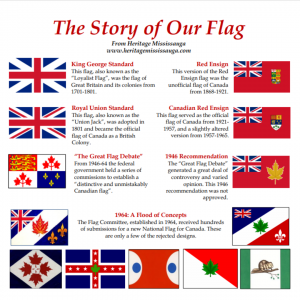 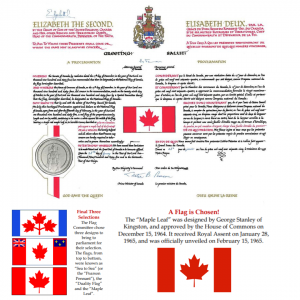 Download your copy of The Story of Our Flag.

Renewing Your Membership Could Get You a Dream Vacation!

On behalf of the Heritage Mississauga staff and Board of Directors we wish to thank all of our members for their support over the years, as a not-for-profit, we rely on the support of our incredible members. Heritage Mississauga is the only independent city-wide organization devoted to heritage matters. We are Mississauga’s definitive heritage source…