A new road sign in the Lakeview area of Mississauga carries a significant link to history. Douglas McCurdy Common is a recent addition to the landscape (or is it roadscape?), and runs north off Lakeshore Road, just to the west of Cawthra Road. 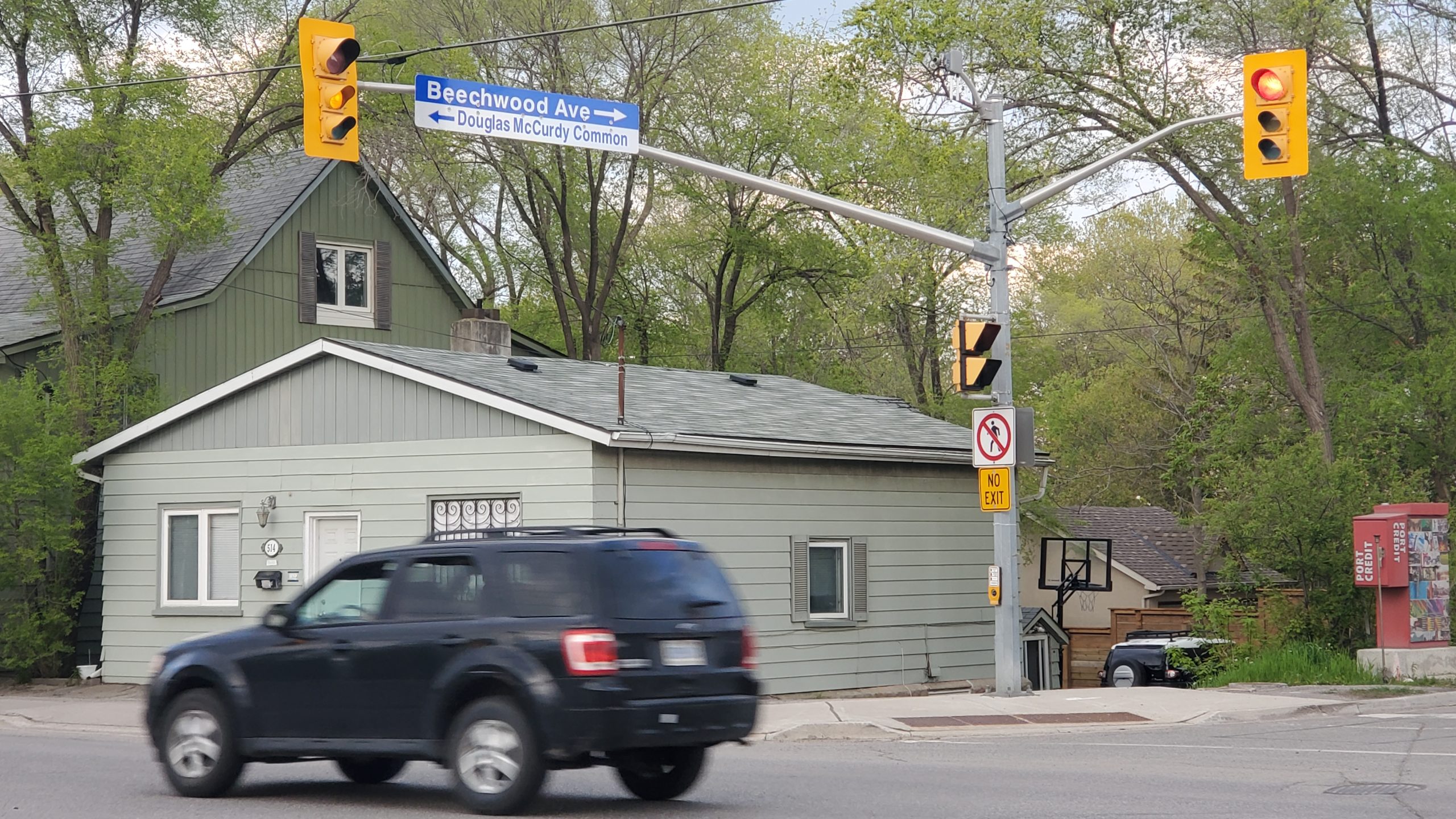 The road is named in honour of John Alexander Douglas (J.A.D.) McCurdy (1886-1961). McCurdy, who went by Douglas, was a native of Baddeck, Nova Scotia, and was a pioneer of Canadian aviation. McCurdy was the first British subject to be recognized in the British Commonwealth to fly a controlled “heavier than air” powered plane. On February 23, 1909, McCurdy piloted the “Silver Dart” across the frozen Bras d’Or Lake in Baddeck Bay, Nova Scotia.

In 1910 McCurdy was the first Canadian to receive a pilot’s license from the Fédération Aéronautique Internationale in Paris through the affiliated Aero Club of America. He passed his test on October 5, 1910 in Chicago, Illinois flying a Curtiss biplane. Certainly a number of Canadian “firsts” – but you might be wondering why a street carries his name here in Mississauga.

In 1914 at the outbreak of the First World War, McCurdy suggested that Canada’s air service could be supported by Canadian-based manufacturing, and with a flight training school to instruct Canadians on how to fly these aircraft. Federal incorporation papers were taken out for the Toronto-based Curtiss company, registered as Curtiss Aeroplanes and Motors, Limited. The firm began operations with J.A.D. McCurdy as its managing director on April 12, 1915. Arrangements were made with Britain’s Royal Naval Air Service and Royal Flying Corps that potential pilots would be trained at the new Curtiss Aviation School.

McCurdy surveyed several locations before obtaining permission to use part of the Long Branch Rifle Ranges (located along the south of Lakeshore Road in the Lakeview area of Mississauga) for an airfield. The Long Branch Curtiss Aviation School became Canada’s first aerodrome. A three-bay corrugated metal covered hangar was completed in late June of 1915 on the east side of the airfield. McCurdy served as the first manager of the aviation school. McCurdy was truly a driving force in the early years of Canadian aviation and of Canada’s war efforts in aviation during both the First and Second World Wars.

For more about the life and times of J.A.D. “Douglas” McCurdy and the Long Branch Aerodrome, we highly recommend:

Ask A Historian: History of The Battle of Vimy Ridge

Join Historian Matthew Wilkinson on our YouTube channel for a special episode of “Ask A Historian” on Friday April, 9 2021 at 4:00 p.m. This week Matthew welcomes Greg Carraro, Vice President of the Heritage Mississauga Board of Directors who is an educator, history enthusiast, and an 1812 reenactor. April 9, 2021 represents a very…

In connection with National Indigenous History Month in June, we thought we would explore a relatively lesser-known connection to Indigenous history here with the City of Mississauga. But first, we have to paint the background picture.   The Town of Mississauga came to be on January 1, 1968. Our former name was Toronto Township, but we…