On May 17 1945, Alice Campbell was found dead on the floor of her small Port Credit grocery store. The blood emanating from her mouth indicated she had been strangled by an intruder, while the interior of her store and living space were in complete ruins and emptied of all cash. Alice Campbell was 75 years old and lived alone with only three cats for company.

Her husband had left her to return to England 13 years before her murder. Her neighbours described her as ‘severely crippled’; she would drag herself in order to move around her grocery store and home. These combined factors made Campbell an easy target for frequent robberies. 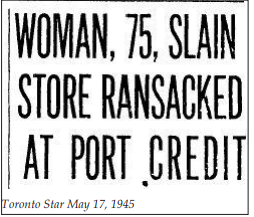 A robbery of the store the previous fall led police to conclude initially that the murder was committed by a group of thugs. Other than this early assumption, the police had no leads. A few days after the murder, Walter Zabolotny, a 43 year old man of Lakeview, was arrested for (and later confessed to) stealing tools from the construction site where he worked. The police unknowingly found their number one suspect in the murder of Alice Campbell. On June 20 Zabolotny also confessed in the robbery of a small Long Branch shop.

By November 10 , more evidence was revealed to the public to pin Zabolotny to Alice Campbell’s murder. Inspector Kelly brought forth a duffle bag that was with Zabolotny st when he checked in at Union Station on May 31 . He was presumably attempting a getaway to St. Catherines. The bag contained bottles of shampoo, vanishing cream, paint brushes, tobacco, 2000 cigarettes, 121 boxes of matches, a thermometer, an arch support, and a bloody screwdriver.

There was also a bread bill made out to Mrs. Alice Campbell with a stamped date of April 28, 1945. The thermometer and arch support were confirmed again by Mrs. Whitall as being Alice Campbell’s property. The bread bill provided Inspector Kelly the solid evidence he needed to directly link Zabolotny to the crime scene at Alice Campbell’s grocery store, while the bloody screwdriver provided the court with the murder weapon.

They were able to reconstruct the cause of death: Zabolotny used the screwdriver to force pieces of cloth down Alice Campbell’s throat and suffocate her to death. At the time, the trial of Walter Zabolotny was regarded as being the longest trial in the county’s history, lasting a record 13 days. Despite the abundance of evidence, Zabolotny’s persistence that he was innocent continually delayed sentencing, while his courtroom manner left news reporters confused.

One reporter from a November 8 Toronto Star article wrote, “Accused produced a package of cigarettes, lit one, and offered them to his guards as they snapped on handcuffs.” He remained aloof 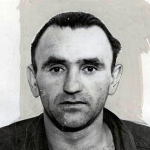 through all court proceedings, often noted as sitting with his head in his hands and a look of boredom. On December 22, Zabolotny was sentenced to death. Although he filed for an appeal, it was dismissed and he was hung in Brampton on February 12 1946.

Even until his last day, Zabolotny insisted he was innocent. Right before his hanging he confided, “I am not afraid to die. You don’t know when you’ll die and you’re not afraid. But I know when I’ll die and I’m not afraid. I don’t know where I am going after I die, but wherever I go, God will know I’m innocent.” Zabolotny’s last days were notably lonely. Only one person, a woman named Anne, visited him in his cell while he awaited execution.

She also held a lone vigil for Zabolotny. Her relationship to Zabolotny is vague and undetermined. She is not referenced as a family member and Zabolotny’s own wife and son did not speak to him after his initial arrest. His last words to Anne were directed towards his son, “don’t let him fall into bad company the way I did. I want him to grow up to be a good man.” This quote appears to be
Zabolotny admitting to being a bad man. Whether this is related to the murder of Alice Campbell is unknown, as is the truth of Zabolotny’s innocence.

Despite the large amount of evidence against Zabolotny, Inspector Kelly often contemplated the possibility of it being planted by an Anne Raynor. Much of the later evidence, like a china dish and a cigar box that belonged to Alice Campbell, was found by Anne Raynor. Raynor was going to the trial with Constable Garnet McGill but he had to stop at Zabolotny’s home to do a quick inspection. Raynor stated that she was curious and wanted to investigate the house herself. This was when she found two new pieces of evidence against Zabolotny.

Inspector Kelly believed it to be planted for two different reasons. The first reason was that the cigar box was dry. If it had been sitting in Zabolotny’s empty home for six months it would have mildewed. The second reason was Inspector Kelly’s own inability to find this key evidence when he did the primary investigation of the residence in June.

Other pieces of evidence clearly identify Zabolotny as the murderer. For example, the night of Alice Campbell’s death Zabolotny had been at a friend’s house across the street. This plants him at the scene of the crime. The day after the murder it was reported that Zabolotny had an unusual amount of coppers with him when he attended his son’s birthday party. He supposedly dumped a handful of copper on the table for his wife and son and left in a hurry.

The conflicting evidence of the case leaves the murder of Alice Campbell undecided with no hope of knowing the absolute truth.

Ask A Historian: 40 Years of Cultural and Architectural Development in Mississauga

Welcome to our 40th installment of “Ask a Historian”. Join Historian Matthew Wilkinson on our YouTube channel for our next episode of “Ask A Historian” on Thursday March 11, 2021 at 4:00 p.m. This week Matthew welcomes renowned architect Michael Spaziani, Principal at MSAi (Michael Spaziani Architect Inc.), as they explore the last 40 years…

On May 29th, Ronnie Hawkins, famed Canadian musician, died at the age of 87 to the sadness of many fans across the country. Hawkins was born in Huntsville, Arkansas, on January 10, 1935, later making a life for himself north of the border. Known affectionately over the years as “Mr. Dynamo,” “Sir Ronnie,” “Rompin’ Ronnie,”…