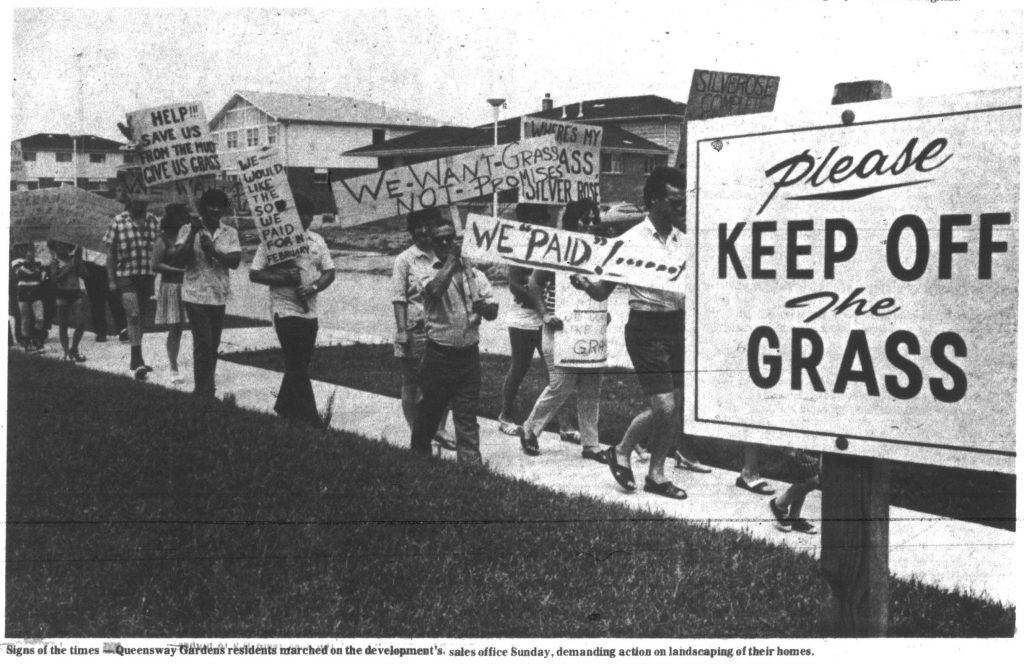 One night, sitting in the living room, my father and uncle were reminiscing about the past – immigrating to Canada and moving to Mississauga. I asked them what their first impressions of Mississauga were back in the early 1970s. As with many who remember the early days of our city, they remembered the farm fields and the newly built subdivisions. They seemed to be in the middle of nowhere prior to infill developments. Back when they first moved into Montego Road in the Queensway Garden subdivision in the Cooksville area, they both recalled something interesting: mud and lots of it! In fact, they both remembered their father (my grandfather) protesting the muddy conditions.

Well, I thought that was a rather odd statement and began to do some research of my own. It turns out that on July 5, 1972, the Mississauga Times’ headline story was on the protest. The story was about more than a bit of mud – it told of the dirty side of Mississauga’s expansion.

Mississauga Times writer John Stewart wrote that Queensway Garden residents were “angered and frustrated” by the lack of sidewalks, grass, or streetlights even after 7 months of moving into their new homes.

When the Fritz family of Montego Road saw topsoil being unloaded after months of no soil or grass, they squealed like children. However, the soil was of such low quality that when the rocks were 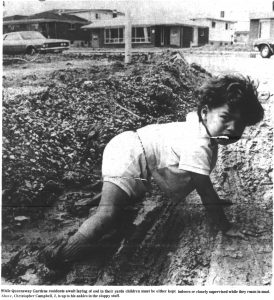 removed, it lowered the level by three feet, according to the article. Another neighbor, the Ladouceurs, complained that bulldozers had torn up trees, leaving gaping holes the size of a “swimming pool”. The uneven muddy area was seen as being downright dangerous for children in the neighborhood. Residents felt restricted, unable to enjoy what should have been their brand-new dream homes.

Other construction faults in and around the homes, including my grandfather’s belief that his home had been built “three feet too far to the left”, had become a point of frustration for the neighborhood. After complaints remained unanswered, the residents began to feel as if their money, which had been given in “good faith”, had been taken by the developer without any real intention of living up to their promises. In a desperate act, the community banded together to protest the conditions.

My father remembers his dad, Leonard Lyn, and the neighbors taking to the streets with their homemade signs. This was, perhaps, the most memorable aspect of the event for my father and uncle. As the neighborhood began to display signs on their properties with slogans like, “The Argos would feel right at home in this mud bowl”, my uncle remembered his father crafting numerous witty signs with glee. Family favourites were my grandfather’s homemade lemon shaped sign that exclaimed the bitter sweetness of their predicament, while another sign read, “It’s a Treat to Beat your Feet in the Mississauga Mud”. It seemed my grandfather was smugly pleased with the signs himself.

However, the article alleged that the protestors might face possible injunctions against posting their large signs on their lawns (or in this case, lack thereof). However, Leonard exclaimed, “I’ll put my sign in my car and drive all over Toronto with it if I have to”. If you knew my grandfather, he certainly had the determination to follow through with his threat. There was no way the builder, Silver Rose Construction, was going to get out of this situation without taking some action.

Luckily, by the end of their protest, some changes were starting to be made. Topsoil was starting to be delivered and the streetlights finally began to operate. This incident, however, was only one example of a disturbing trend of Mississauga’s sprawl of the 1970s.

The Mississauga Times covered the issue in another article titled, “Trampled Building Department Regroups to Handle Construction Boom” by Frank Touby on January 3, 1973. Then director of 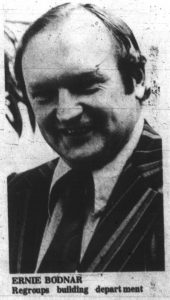 building, zoning, and licensing, Ernie Bodnar, explained that building was up 50% from the year prior, leading to exhaustion, poor morale, and ultimately sloppy work. Not only were those in the building industry not getting any breaks during the winter as they normally did, but the amount of complaints of shoddy work was off the charts, adding to even more work for inspectors. As Bodnar put it, “they’d put out one fire and another would break out.” It was tiring and demoralizing, particularly since laws favoured the builders, allowing them too much freedom that could be exerted in unscrupulous ways – namely abandoning half-finished jobs and leaving new homeowners to pick up the pieces. Bodnar suggested there should be a set completion date that if builders did not meet, they would receive a penalty.

Though he does assure readers that the issues with Silver Rose Construction at the Queensway Garden site in Cooksville had largely been resolved, some questions were still left unanswered. Bodnar wondered how homeowners would feel having to pay for past mistakes from shoddy workmanship at their own expense down the road. For the time being, Ernie Bodnar did all that he could back then in 1973. He reorganized the building, zoning, and licensing department to create specialists to control as many of Mississauga’s ever-growing housing issues as possible. Today, there are more regulations controlling the behaviour of developers.

Though this story started as a trip down memory lane for my dad and his brother about their childhood home in Cooksville, Mississauga, it is just part of a far larger story.

For me, I gained a deeper appreciation for the nuances of that period in our city’s history. Fast and plentiful developments allowed my family and others to move to Mississauga. This contributed to the cultural, economic and infrastructural development of Mississauga, but it was certainly no walk in the park.

When the going got tough, residents did not give up. Instead, they demanded action from their local building, zoning, and licensing department, from people like Ernie Bodnar whose hearts were in the right place, trying to change the system to ensure fair treatment of Mississauga residents. Finally, if these avenues did not lead to results, communities came together and did the only thing that they could – took to the streets in grassroots efforts just to receive their due of grass! For the struggles that my family and other families have been through, I applaud them for making Mississauga a better place for all of us to live.

Way Back Wednesday: Finding Mississauga Wherever “There” May Be

When I travel, my thoughts and eyes are always drawn to the history of the area that I am now exploring. Old buildings, road names, heritage markers, interpretive signs, museums and the like always capture my interest and curiosity. Having recently spent some vacation time in the Port Elgin area, the trip offered me yet…

Way Back Wednesday: Wherever “there” may be; finding Mississauga outside of the city

As with previous articles on this theme, whenever I travel, I invariably find myself drawn to making connections back to Mississauga. We recently took a few days to get away and visit Ottawa, which is a place that our family always loves to explore. Our first “connect” to Mississauga came along the route there. Passing…

The seemingly lazy course of the Credit River belies its vital importance to early industry and settlement in historic Mississauga. Water-powered mills once dotted the landscape, making use of natural (and harnessed) water energy to drive machinery. Few remnants remain on the landscape today, although some clues do remain. At the south end of Streetsville…