Onlookers were awestruck by the plane’s appearance: “Its swept-back delta wings and early electronic flight controls gave it the look of tomorrow,” journalist Ian Austen has written, “as did its blinding white, matte black and Day-Glo orange paint.” 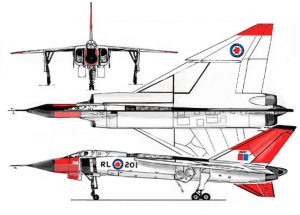 The CF-105, also known as the AVRO Arrow, was a jet interceptor aircraft designed, built and flown in Malton (now within the City of Mississauga) between 1957 and 1959. The plane was hailed as being ahead of its time, and became a source of National pride in Canada.

The story of the Arrow began in 1952, when the Royal Canadian Air Force looked to develop a new jet fighter / interceptor capable of extremely high level performance with advanced weapons and flight control systems which could also function in all weather conditions.

In 1953, the CF-105 Supersonic Interceptor project began, and the formal production and prototype testing began in 1954.

Had it flown, RL-206 was expected to have broken the world flight speed and altitude records; but it never had the chance. On Friday, February 20, 1959, Prime Minister Diefenbaker announced the cancellation of the AVRO Arrow program. Amidst rumours and ominous news warnings which cited escalating production costs, the federal government ordered that all traces of the program – planes, parts and plans – be destroyed. The day became known as “Black Friday”.

In the days and weeks after the cancellation, the five flying Arrows were unceremoniously cut into scrap, and the nearly finished RL-206 and all in-production Arrows were dismantled. It is estimated that over 50,000 people lost their jobs as a result of layoffs and plant closures.

The story of the AVRO Arrow continues to fascinate historians and enthusiasts to this day. There are many books that look at different aspects of its development and destruction, and many more that investigate the conspiracy rumours.

The story of the AVRO Arrow is a story that refuses to stay quiet, to disappear.

Heritage Mississauga’s Board of Directors compiled a survey of questions for the current Mississauga candidates to determine their respective perspectives on heritage in Mississauga. Questions Posed to Candidates: 1.    Why is heritage important to you personally? Why do you believe that heritage is important to the city at large? In your role, what steps would…

Next stop on the GooseChase Scavenger Hunt, North Streetsville! When the survey of the northern portion of Toronto Township was completed in 1819, survey contractor Timothy Street received permission to build a saw and grist mill. As news of the construction of a mill on the banks of the Credit River spread, more settlers were…

The Battle of Sandwich was not in fact a battle for a lunch favorite, but in actuality an invasion of Windsor, then known as Sandwich, by American Brigadier-General William Hull on July 12, 1812. After around a month of preparation in both the United States and Canada, Hull initiated the first opener in the land…

This week on Ask A Historian, Matthew welcomes volunteer extraordinaire, Elaine Eigl as they discuss the historic Bronte Cemetery and the incredible walking tours at the cemetery that will be available this month. Elaine Eigl is a Heritage Researcher who is committed to the preservation and promotion of built and culture heritage resources. She holds…