Did you know that Dr. Martin Luther King Jr. passed through Mississauga to attend the talk held on March 15th, 1962.

During the 1960s, Civil Rights was at the forefront of not only American, but also Canadian minds. In 1962, civil rights activist Dr. Martin Luther King Jr. travelled to Toronto to speak at Toronto’s Holy Blossom Temple, where Rabbi W. Gunther Plaut was a leading figure in the Canadian Civil Right movement. 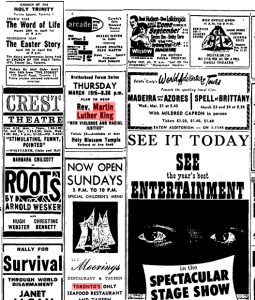 King would have passed through Malton’s Toronto International Airport (now Pearson International Airport) to attend the talk held on March 15th, 1962. The crowd was filled with civil rights activists, members of Toronto’s Jewish community, as well civil rights activists including members of the Canadian Negro Women’s Association (CNWA). King emphasized that although some progress had been made, there was still much work to do.

While some simply wanted to let time solve the problems, King argued, “Time is neutral. Time can be used destructively or constructively. We must help time and the time is right now.” When asked what Canadians could do to support their American neighbors, King responded that, “Canadians should be sure that their own backyards are clean before they offer their help”. However, Dr. King gave the crowd this message of hope: “We have faith in the future. We shall overcome. One day, we shall be able to say: Free at last”!

Welcome to our 25th installment of “Ask a Historian”. Every week Heritage Mississauga will be taking questions about the history and heritage of Mississauga which our Historian, Matthew Wilkinson, will answer on Thursday afternoons. #ApartTogether, Heritage Mississauga is the source for inquiries and curiosity about our beautiful city as we continue our mandate to research,…