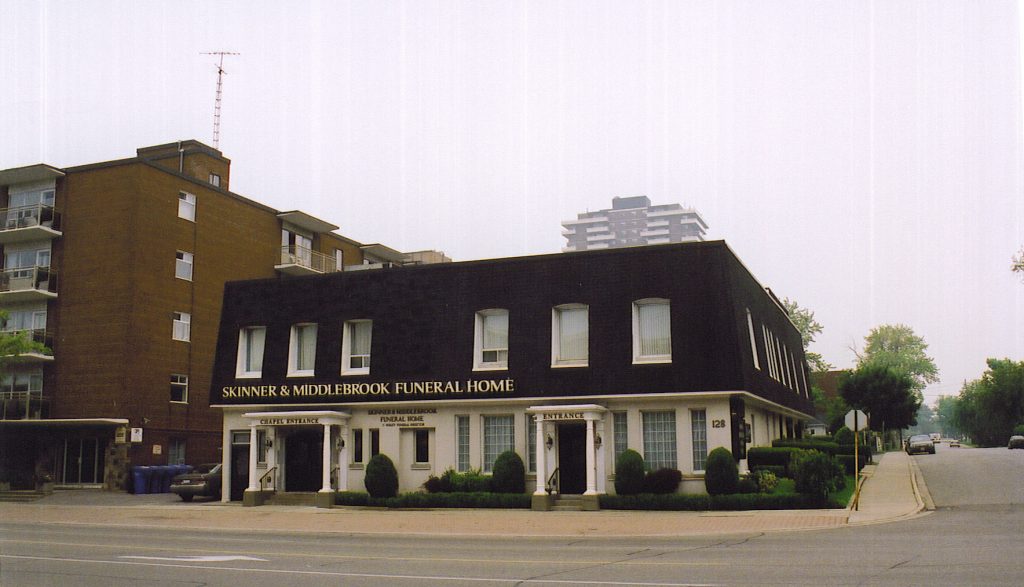 This week in our #ThenAndNow Tuesday, we are looking at the Skinner and Middlebrook Funeral Home.

A landmark in every sense of the word, Skinner and Middlebrook Funeral Home in Port Credit has been a cornerstone of the community for generations.

The building that houses the funeral home was originally built, in part, in 1923-24. George Frederick Skinner (1885-1977) established the funeral home here in 1924, and was assisted in those early years by undertaker Otto Wellington Cavan (1879-1957). Fred was a cousin of the prominent Skinner family of Mineola, which likely played a part in bringing him to Port Credit after having previously operating a funeral home in Schomberg.

In 1939, Frank Middlebrook came to apprentice under Fred Skinner, and in 1941 he graduated from the Canadian School of Embalming. In 1947 Skinner and Middlebrook Limited Funeral Home was formed. The building, first opened in 1924, underwent an expansion in 1952. In 1961 the funeral home was sold to long-time employee John Insley, who retained the name of Skinner and Middlebrook.

In 1962 additional renovations and additions altered the façade of the building into what we see today. Look closely at the windows and front door on the east side of the building, and you will see catch glimpses of the 1924 building peaking through the modern façade.

On Monday June 20, 2022, the City of Mississauga’s Planning and Development Committee held a public meeting to provide information on the proposed development at 128 Lakeshore Road East.

Visit https://www.mississauga.ca/council/committees/planning-and-development-committee/ for a recording of the meeting.

Welcome to our 42nd installment of “Ask a Historian”. Join Historian Matthew Wilkinson on our YouTube channel for our next episode of “Ask A Historian” on Thursday March 25, 2021 at 4:00 p.m. This week Matthew welcomes John Dunlop, Manager of Heritage Planning & Indigenous Relations at the City of Mississauga, as they explore the…

Celebrating Irish History: In Search of the O’Hara Family

In January 2010, Mississauga officially expanded, adding land along the west side of Ninth Line in what was formerly part of Trafalgar Township in Halton County. As a result of this expansion of our western border, a property known as the O’Hara House (5104 Ninth Line) became part of the City of Mississauga. Built circa…

The completion Treaty 19 left the Mississaugas with three small reserves at 12 Mile Creek, 16 Mile Creek, and the Credit River. Noting the distress and poverty of the Mississaugas, William Claus, Deputy Superintendent of the Indian Department, met with the Mississaugas and proposed the surrender of their remaining lands. Claus promised that the proceeds…

Way Back Wednesday: From the Emperor of China to Lorne Park: Remembering the Southern Belle

Continuing our theme on the era of the steamships, another well-known passenger steamer that brought summer visitors from Toronto to Port Credit, Lorne Park, Oakville, and all recreational and amusement points from Niagara and back was the Southern Belle. But like many, the Belle had begun life in another vocation and under another name. The…