Today as we continue to celebrate Mississauga’s aviation heroes and icons, we could not forget to mention Malton’s historic AVRO Arrow and the pilots that flew the iconic aircraft.

Perhaps the best known pilot who was involved with the AVRO Arrow program was Janusz (Jan) Zurakowski. Jan was born in Ryzawka, Russia, to Polish parents on September 12th, 1914. Jan,
who was nicknamed “Zura”, was renowned for his aeronautical skills and his extensive career as a test pilot. He was also a decorated aviator, fighting for Poland and the United Kingdom during World War II.

In 1952, he immigrated to Canada and began a career as the lead development pilot for A.V. Roe Canada. Flying the CF-100 on December 18th, 1952, Jan broke the sound barrier and became the first person to exceed the speed of sound in a straight wing jet aircraft.

Jan retired from test flying later in 1958, and in 1973 was inducted into Canada’s Aviation Hall of Fame for his outstanding contributions to Canadian aviation. Jan died at his home in Barry’s Bay, Ontario, on February 9th, 2004. In October of 2007, the City of Mississauga named a recreational trail in his honour.

The pilot who had the most flying time in the Arrow program was Wladyslaw “Spud” Potocki. Spud was born in Poland in 1919. He served with the Polish Air Force, and later escaped from Poland during the World War II. He then joined the Polish Squadrons of the RAF, along with his countryman, Jan Zurakowski.

After the war, Spud graduated from the British Empire Test Pilot School and found employment with A.V. Roe Canada. His first flight with the Arrow took place on April 23rd, 1958, in RL-201.

After Zurakowski’s retirement, Spud became the chief test pilot for the Arrow program. He piloted RL-204 and RL-205 on their maiden flights, on October 27th, 1958 and January 11th, 1959 respectively.

Potocki also has the distinction of being at the controls of the last Arrow to fly, when he piloted RL-201 on February 19th, 1959, one day before the official cancellation.

In total, Spud flew 34 hours and 35 minutes in the Arrows. Potocki was also involved with the short-lived “Avrocar” program. Following the cancellation of the program, he joined North American Rockwell as a test pilot.

His flying career ended when an accident, unrelated to flying, claimed his vision in one eye. He then retired, and together with his wife operated a motel business in Columbia, Ohio, where he died in 1996 at the age of 77.

A third pilot to fly the Arrow was Peter Roland Cope. Peter was born on December 7, 1921, in Croydon, England.

His formative years were spent in the shadow of London’s largest airport, perhaps inspiring his career goals in aviation. In 1941 Peter enlisted in the RAF, and he was sent to the United States for his training. Peter completed his training in May of 1942.

He then served as a fighter pilot and reconnaissance photographer during the remainder of World War II, flying North American P-51s, Hawker Tempests, de Havilland Mosquitoes, and a variety of other planes.

In 1949, Peter resigned from the RAF and became a test pilot with Armstrong Whitworth Aircraft. During his career, Peter reportedly flew 103 different types of aircraft. On February 2nd,
1950 Peter was inducted into the Guild of Air Pilots and Air Navigators of the British Empire.

Peter was hired as a test pilot by A.V. Roe Canada in 1951, following the tragic deaths of Bill Waterton and Bruce Warren, test pilots in the XC-100 program who were killed in a crash. Peter
became was a test pilot with the CF-100 AVRO “Canuck”, and became one of the key participants in making modifications to the aircraft that would lead to its success.

He was also the only pilot to land an Arrow away from the Malton Airport, when he landed RL-204 at Trenton on February 2nd, 1959. Peter flew a total of five times in the Arrows, in RL-202, RL-203 and RL204. He amassed 5 hours and 25 minutes of flying time in the Arrows. In a CBC documentary on the Arrow, Peter commented that “it was a phenomenal performing aircraft; our performance boys thought we might get Mach 1.6 out of it yet we flew it to nearly Mach 2.

After the Arrow cancellation, he joined Boeing in Seattle, Washington. Peter retired in 1986 and lived in Washington State, after an outstanding career in aviation. He passed away in April of 2005.

The fourth, last, and only Canadian-born pilot to fly the AVRO Arrow was Flight Lieutenant Jack Woodman from the RCAF. Jack was born on May 14, 1925, in Saskatoon, Saskatchewan.

During the war he completed 23 combat missions in Halifax and Lancaster bombers. After the war, Jack attended the University of Saskatchewan, and later rejoined the RCAF in the pilot training program. He became Canada’s representative to the Empire Test Pilot’s School in England, where he tested a variety of aircraft, including the Vampire, Lancaster, Otter and Chipmunk. Jack also flew the CF-100 in 1955 at the Paris Air Show.

He has the distinction of being the only active military pilot to fly the Arrow. Woodman flew six times in the Arrows, for a total of 6 hours and 45 minutes of flying time. After the cancellation of the program, Jack was transferred by the RCAF to California in 1960, where he worked as the project pilot for Lockheed (formerly the Lougheed Aircraft Manufacturing Company).

Jack passed away from cancer on May 16th, 1967. Following his death, he was inducted into the Canadian Aviation Hall of Fame.

The fifth pilot who was associated with Arrow program was Lorne Ursel. Lorne never had the opportunity to fly in the Arrow. He taxied in the Arrow twice, and was first recalled because of a mechanical problem, and the second time was recalled due to the cancellation of the program.

The legend is that Lorne was in the process of taxiing down the runway on February 20th, 1959, when notice of the cancellation was received by A.V. Roe. Lorne was immediately recalled and his flight plans cancelled. Lorne never did get the opportunity to fly the Arrow.

Despite the cancellation of the CF-105 program, it was these pilots who played an instrumental role in introducing Canadians and the world to the AVRO Arrow, and stretching the wings of this remarkable aircraft, if even for a short period of time.

The above was part of an article written by our own Historian, Matthew Wilkinson. If you would like to learn more about the AVRO and the pilots, we invite you to watch our YouTube channel:

Or download some of our comics and booklets on the AVRO!: 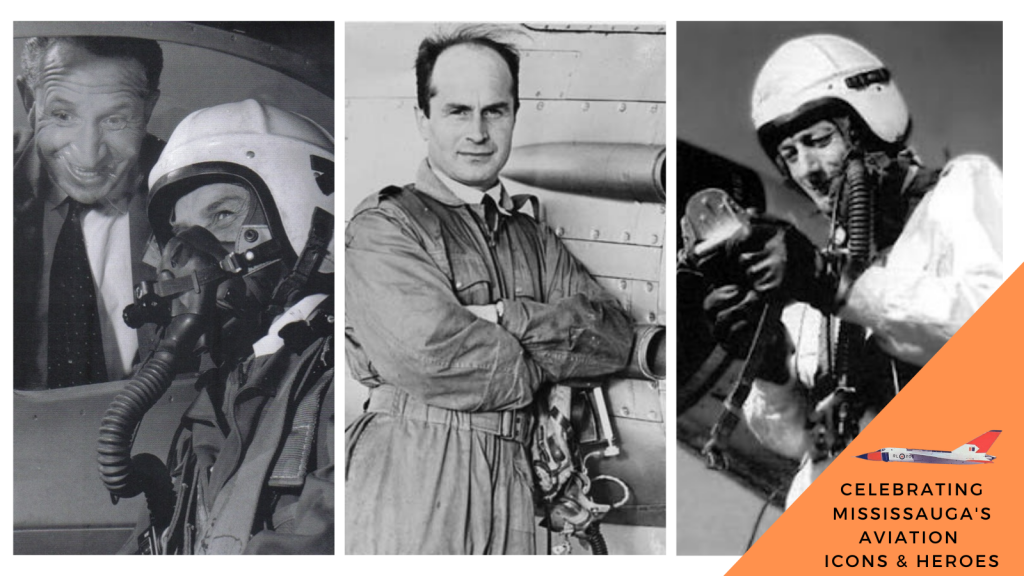 Welcome to our sixth installment of “Ask a Historian”. Every week Heritage Mississauga will be taking questions about the history and heritage of Mississauga which our Historian, Matthew Wilkinson, will answer on Thursday afternoons. #ApartTogether, Heritage Mississauga is the source for inquiries and curiosity about our beautiful city as we continue our mandate to research,…

Ask A Historian: Myths and Legends

Welcome to our 43rd installment of “Ask a Historian”. Join Historian Matthew Wilkinson on our YouTube channel for our next episode of “Ask A Historian” on Thursday April 1, 2021 at 4:00 p.m. This week Matthew explores some of the myths and legends of Mississauga from mischievous Memegwaans and evasive sea serpents, to hidden treasures…

Saturday Matinee Movie: The Lay of the Land: Exploring Treaties 22 & 23 and the Racey Tract

Join Historian Matthew Wilkinson for our Saturday Matinee: The Lay of the Land: Exploring Treaties 22 & 23 and the Racey Tract. June marks National Indigenous History Month, with a particular date focus on June 21, 2020 as National Indigenous Peoples Day. Heritage Mississauga would like to encourage Canadians to celebrate and learn more about…