Please help up us capture to story of how COVID-19 pandemic has affected you here in Mississauga. Please share stories and images at [email protected] or https://www.facebook.com/HeritageMississauga

Crewenan Road, east of Cooksville, remembers an early doctor in our community. Although the road itself dates to the 1950s, the road name recalls Doctor William Poole Crewe (1797-1861), the first resident doctor in Cooksville, and one of the earliest licensed surgeons in Peel County.

Doctor Crewe was born in Newcastle-Under-Lyme, Staffordshire, England. Together with his wife, Sarah, he came to Canada in 1833-34, sailing aboard the steamship SS Royal William, where he served as the ship’s doctor. He arrived in Canada in the midst of a cholera epidemic, and his skills were in drastic need. He first resided in Quebec City, before moving to Toronto in 1836, where he was quickly granted a medical license to practice in Upper Canada. In 1840 or 1841, Doctor Crewe moved to Cooksville (in historic Mississauga), where he would establish his practice and reside for the rest of his life.

The doctor purchased a 100-acre property east of Cooksville in 1841, and had a large brick residence built, which served as both his home and his office. The house was known as Stafford House. Modern Cliff Road (named after Captain George Cliff, who would acquire the property in 1878 after Doctor Crewe’s death) and Crewenan Road are on part of the Stafford House property.

Doctor Crewe was a travelling physician, a mortician, and as a surgeon his skills were in wide demand. He visited patients as far away as Kingston and Goderich, and was known to travel far distances in any kind of weather.

His treatment for cholera was a combination of antimony wine or brandy, calomel (mercurous chloride), camphorated tincture of opium, and a tincture of hyoscyamus (nightshade). From Edward Rawling’s “Almost Forgotten”, Doctor Crewe was quoted as saying: “My seven-day, 24-hours-a-day practice was invigorating but gradually I could feel it weakening me mentally and physically.” Doctor William Poole Crewe passed away in 1861 at the age of 64, and was laid to rest, with great reverence, in Dixie Union Cemetery. 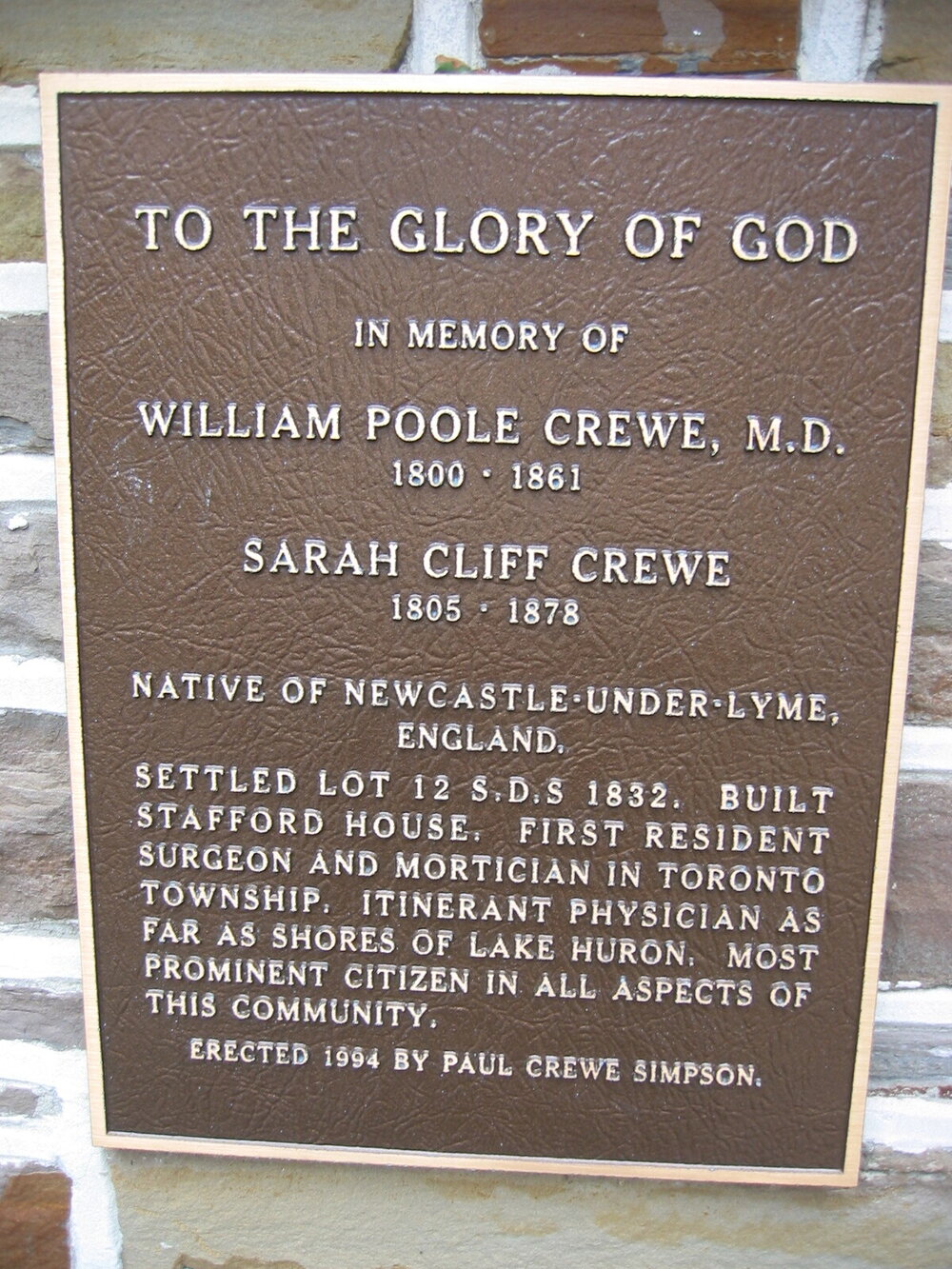 It can be found on their website here: https://www.modernmississauga.com/main/2020/3/31/the-history-of-mississaugas-crewenan-road

A new road sign in the Lakeview area of Mississauga carries a significant link to history. Douglas McCurdy Common is a recent addition to the landscape (or is it roadscape?), and runs north off Lakeshore Road, just to the west of Cawthra Road. The road is named in honour of John Alexander Douglas (J.A.D.) McCurdy…

February 2nd is Groundhog Day and Canadians may be happy to hear that our own Wiarton Willie predicts an early spring for 2021. However in the United States, Punxsutawney Phil predicts six more weeks of winter! The Groundhog Day lore holds that the emergence of the groundhog from his burrow will foretell the weather for…

Treaties Recognition Week (November 1 to November 7, 2021) highlights the history of treaties and helps Ontario residents understand the significance of treaty rights, treaty relationships, their relevance today, and the impact of promises made, promises kept, and promises broken. Throughout the week we will look at five of the treaties connected to the City…