Apart but together, please help us capture the story of how COVID-19 pandemic has affected you here in Mississauga. Please share stories and images at [email protected] or https://www.facebook.com/HeritageMississauga
#ApartTogether

The inspiration for this ongoing “Way Back Wednesday” article series is the exploration of names found on the landscape of Mississauga – road names, park names, building names and other commemorations and remembrances. After all, regardless of when a name is applied, people do not name things (or take pictures of things) that they want to forget. This week’s article is a departure from that, at least partly. The subject of this article does not have a place named for him – although arguably he should. 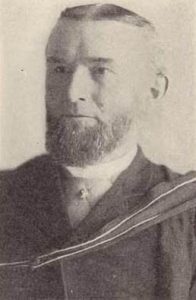 Doctor Moses Henry Aikins (1832-1921) was born at the hamlet of Burnhamthorpe (near the modern intersection of Burnhamthorpe Road and Dixie Road in Mississauga). He was a member of a renowned family; his brother, William (W.T.) Aikins also had a celebrated career in medicine and education, while another brother and nephew had notable political careers.

Moses studied at Victoria College, and at the Jefferson School of Medicine in Philadelphia. His career path took him briefly to England and Scotland, where he practiced at Guy’s Hospital and became a member of the Royal College of Surgeons. When he returned to Canada, he established his medical practice at Burnhamthorpe in 1859. While maintaining his local practice, in 1860 he was also appointed a professor of anatomy at his alma-mater, Victoria College, and served in that capacity for 25 years. Afterward he was an associate professor at the Toronto School of Medicine until 1892.

Primarily, however, he considered himself a “rural family doctor” whose practice lasted for an incredible 58 years. In the 1880 smallpox epidemic, hundreds of patients were said to form queues in front of his surgery. In the 1894 smallpox epidemic, he headed a board of Doctors in a vaccination campaign. One patient said of him “He brought me into the world, but he won’t let me out of it.” Another patient recalled, “He was the doctor when my mother was born, when my sister was born and when her baby came.” Thus he was welcomed both as physician and friend for several generations of many families. “His appearance and manner inspired confidence … Nobody dared to die in the southern end of the county without his permission … He blessed his patients with a kind paternalism, great sincerity and personal interest especially where children were concerned.”

In the 1930s, it was written that Doctor Aikins steadfastly refused invitations to move his practice to the city and remained rooted in his native soil. He was commended for his life of service, as his practice covered much of Peel and Halton counties, and other doctors were known to seek his guidance in their own practices. William Perkins Bull recorded in From Medicine Man to Medical Man: “Those who recall him …cherish memories of his charm of manner and humanity of action and outlook. He had the quiet, unobtrusive temperament of a scholar, but through his serious professional mien, shone a strain of humour. He was of stocky physique, with an iron constitution inherited from yeoman forebears, and was erect and brisk in his movements. From the family homestead at Burnhamthorpe, he responded to calls in every direction, snatching a few hours’ sleep in a farmhouse or country inn and often in his buggy … few physicians have followed the code of Hippocrates with such fervency and profound regard for the obligations of his profession. Calls for his services did not go unheeded, whatever the physical strain or hardship involved.”

In 1915, in his 84th year, “He quietly packed his instrument case, put away his prescription pad, and retired from active practice.” After retirement, his health and eyesight failed rapidly. But his judgment was revered and sought by both professional brethren and the general public right up to the end of his days. He was one of the last country doctors whose practice stretched back to before Confederation. But even in retirement, he was noted to assist his neighbours and long-standing patients. In his will, Doctor Aikins bequeathed money to the Hospital for Sick Children, the Toronto General Hospital, Victoria College at the University of Toronto, and the Salvation Army. The Moses Henry Aikins Scholarship was created in his memory, and through his will, as an award to outstanding, newly-admitted first year Victoria College students. Moses is remembered at Victoria College today as an “Early and generous benefactor”. 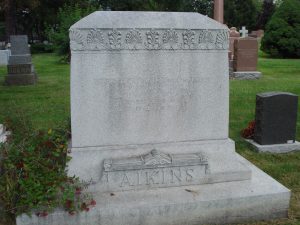 On his passing in 1821, Miss Stella Middlebrook of Malton gave this glowing tribute: “It is therefore because of his great service in the county of his birth and his devotion to duty – as a physician, as a Professor, as a citizen, as a farmer, as a man of intellect, and as a man of wealth – that I present Dr. M. H. Aikins for the laurels of the greatest son of Peel.”

On behalf of Heritage Mississauga Happy Lunar New Year 2021! May all those celebrating the Year Of The Ox have a happy Tet, Chinese New Year and Seollal filled with health, happiness, good fortune and joy. Here is an excellent website to learn all about the Chinese New Year: https://chinesenewyear.net/ Gung Hay Fat Choy! Chuc…

Join Historian Matthew Wilkinson today for a special Saturday Matinee presentation in recognition of St. Patrick’s Day as Matthew explores the story of Irish immigration and settlement in historic Mississauga. Many Irish families came to settle in historic Mississauga and they faced challenges with the landscape, barriers to land ownership, and religous persecution. Irish communities…

June marks National Indigenous History Month, with a particular date focus on June 21, 2020 as National Indigenous Peoples Day. Heritage Mississauga would like to encourage Canadians to celebrate and learn more about the cultural identity and diversity of First Nations, Metis and Inuit peoples. As the source for heritage in Mississauga, we are pleased…