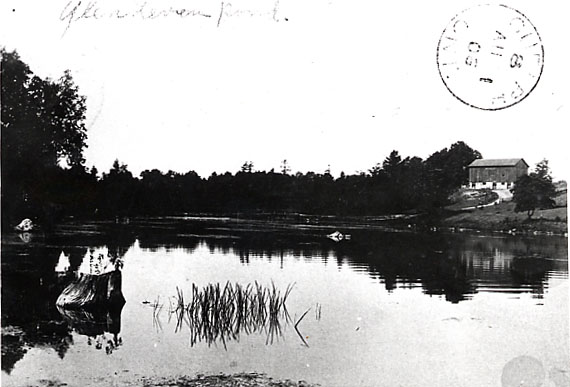 George McGill was born in Edinburgh, Scotland, and came to Canada around 1837, together with his wife Elizabeth Bishop and their children: Ann, Henry, Margaret, James, John and newborn infant William. In 1851 George purchased a 200-acre property in what is now the Lorne Park area of Mississauga. His land was on the north side of modern Lakeshore Road, west of Lorne Park Road.

The property contained a large marshy area, or glen in the Scottish tradition, where a stream (later named Birchwood Creek) created several ponds. The McGill family built their home at the

southern end of the glen, close to Lakeshore Road, and they called their property Glen Leven (perhaps after Loch Leven in their native Scotland).

The family farm prospered, and George saw his children become established as they grew into adulthood. Henry and James became lumber merchants, John was a prominent miller in nearby Springfield (Erindale), and William was a watchmaker and later a politician. Daughter Margaret married Andrew Burns, another prominent early settler in the Lorne Park area. Patriarch George McGill passed away in 1861, and the Glen Leven property was left to his sons, Henry and James. Henry’s widow sold the property in 1893 to James McKerrow, and in 1898 it was purchased by John Peer.

John Peer turned the large red brick McGill house overlooking the glen into a hotel, which he appropriately named the Glen Leven Hotel. In 1902 the hotel and property were sold to Laughlin Hamilton. Hamilton commenced making improvements, including clearing some of the land around the glen, building a small island in one of the large ponds, and making walking trails throughout the glen. Hamilton also stocked the largest pond with trout. Fishing in the summer months and ice skating at Glen Leven during the winter became well-loved community pastimes.

Laughlin Hamilton also maintained extensive orchards and cultivated large crops of strawberries. The Glen Leven Hotel reverted to a house for the Laughlin and Constance Hamilton around 1920.

Laughlin Hamilton also owned property south of Lakeshore Road which, in 1920, he turned into the Glen Leven Golf Course. Hamilton had served as the first president of the Mississaugua Golf & 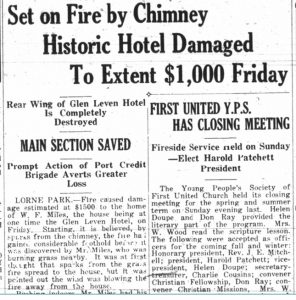 Country Club on Mississauga Road from 1906 until 1915, before establishing his own golf course. The very popular Glen Leven Golf Course operated until 1966, when it was sold for development under the name of “Glen Leven Properties Limited. Nearby “Glenleven Crescent” remembers the property’s early years as the “poor man’s golf course”. But both the modern road and the former golf club took their name from the original McGill farm property on the north side of Lakeshore Road.

Although the house had ceased to be used as a hotel by the early 1920s, the surrounding Glen Leven property was well-loved in the vicinity. Early newspapers such as the Port Credit News carry references to picnics, Scout and Girl Guide meetings, fishing, ice skating, social gatherings, and meetings of the Clarkson-Lorne Park Women’s Institute all taking place at Glen Leven.

The rambling Glen Leven Hotel had grown larger over the years, with multiple additions. It was reportedly “T-shaped” with wings on each side. In 1936 fire struck the old building, resulting in the loss of a large section of the house known as the “studio. At that time Hamilton’s nephew, Fred Miles, was living at the former hotel with his family. Miles and his family lived there until 1952. The former Glen Leven Hotel stood until 1956 when it was demolished. But the glen was still referred to as Glen Leven for many more years by those in the Lorne Park area.

We have yet to locate an image of the former Glen Leven Hotel.

Welcome to our 24th installment of “Ask a Historian”. Every week Heritage Mississauga will be taking questions about the history and heritage of Mississauga which our Historian, Matthew Wilkinson, will answer on Thursday afternoons. #ApartTogether, Heritage Mississauga is the source for inquiries and curiosity about our beautiful city as we continue our mandate to research,…

Way Back Wednesday: A Reminder of Darker Days in Mississauga’s Lakeview Area

An area of Lakeview in southwest Mississauga carries a series of street names that harken back to a time when a schemer scammed hundreds of people out of their life savings and almost ruined a community. Local farmer Robert Duck passed away in 1922, and within days of his funeral, a Toronto realtor named Harold…

Ask A Historian: Curious Buildings, Old Movie Theatres, and the Introduction of Disease by Settlers

March 3, 2021 is World Wildlife Day and the theme this year is “Forests and Livelihoods: Sustaining People and Planet”, as a way to highlight the central role of forests, forest species and ecosystems services in sustaining the livelihoods of hundreds of millions of people globally, and particularly of Indigenous and local communities with historic…