This is part four of a 5-part article series that explores Colonial connections on our landscape here in the City of Mississauga.

This week’s article explores the naming of Dundas Street, and the place-naming legacy of Lt-Governor John Graves Simcoe.

One of the earliest references to the naming of Dundas Street comes from the diary of Elizabeth Simcoe, and is dated Tuesday, September 23, 1793: “Mr. Smith has gone to open a road, to be called Dundas Street, from the Head of the Lake to the River La Tranche (the Thames). He has 100 men with him.” 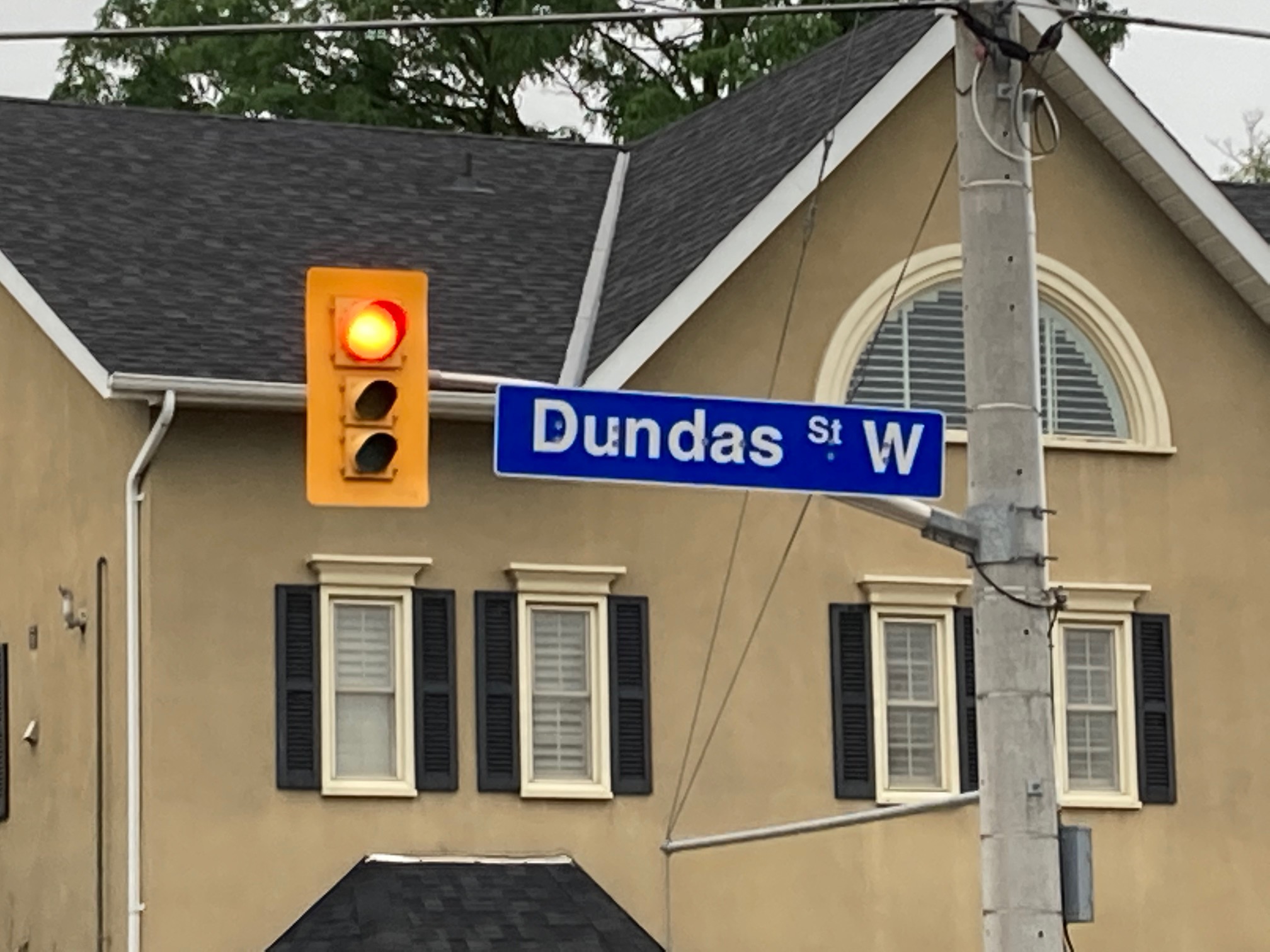 Joseph Brant, a contemporary of Simcoe, once commented that “[he] has done a great deal for this province, he has the changed the name of every place in it.”

As a British agent in Upper Canada and a strong developmentalist, Simcoe’s governmental package included a convention of naming which accompanied his programs of road-building and administrative development.

During his tenure in the 1790s, Upper Canada was undergoing significant developments in infrastructure and settlement, fueled by the influx of migrants from the south and defensive priorities motivated by fears of an American invasion.

Without an Indigenous frame-of-reference to draw on, and a seemingly “blank” canvas before him, Simcoe drew on his own relationships and connections to Britain to form the toponymies which accompanied the emergent settler landscape.

Prior to Simcoe’s arrival and major settlement patterns in Upper Canada, various fur trade roads and trails established by Indigenous communities ran across the southern stretches of the region.

Although they formed a web of preexisting infrastructure, Simcoe established his own highways along the major settler and military points.

Although there was a preexisting infrastructural network, it provided no toponymic frame of reference for Simcoe’s Upper Canadian administration.

Embarking on their own settler colonial project through roads was something of a two-pronged offensive: it entailed new major roads intended to overshadow the importance of older Indigenous ones (although this took some time to take root in Upper Canada, as Indigenous roads remained preferred for some time), and it represented the creation of a social landscape that could allow for the reflection of British settler ideologies via road names.

This assumption on the part of settlers and settler administrations like those of Simcoe was a pattern not unique to Canada. The colonial enterprise of ‘exploration’ allowed for settlers to frame lands like those of Canada, America, and Australia as “empty spaces.”

This concept of vacancy and the imagining of land by settlers as a tabula rasa allowed for them to imprint their own cultures and experiences via new toponymies in the landscape – not necessitating the reliance on any prior pre-settler reference.

This process was arguably tied to the ways in which settlers created ownership over the land. The specific settler vision which defined the names of the landscape was certainly not confined to Simcoe, and within Canada this process did not begin nor end with him. Our focus remains on his particular conventions, however.

Looking back to Britain and his own identity, Simcoe shaped the landscape as something of an extension of his mother country. The specifics of Simcoe’s naming, however, were rather unusual.

The two most prominent roads in Upper Canada, Dundas Street and Yonge Street (of which Mississauga inherits the former), were named for close friends of Simcoe who occupied important ministerial positions in the British cabinet, and who were in close contact with Simcoe during his tenure in North America.

It did not end with roads either: counties across Upper Canada were similarly named for friends of Simcoe, among them Addington, Northumberland, and a county also called Dundas.

Perhaps the jewel in the crown of Simcoe’s naming enterprise was the city of York, which prior to Simcoe, and to this day, went by ‘Toronto.’

This accompanied a shift in the provincial capital, from Newark as well (today Niagara-on-the-lake). Beyond centering York as the new prominent urbanscape in Upper Canada, the new name also reflected the social power of Simcoe’s settler mindset, which entailed a displacement of Indigenous names.

Dundas Street, however, remains our focus due to its importance in Mississauga’s context, and how it manifests as an example of Simcoe’s naming priorities and legacy.

Named for Henry Dundas, British Home Secretary at the time of Simcoe’s tenure in the 1790s, the christening of Dundas Street represented two important facets of Simcoe’s position as name-giver.

Firstly, and as elucidated throughout, it was an illustration of Simcoe’s own British connection, and the desire to develop Upper Canada along a British Anglophone trajectory within the settler frame.

Secondly, it demonstrated his own personal authority in being able to determine public toponyms, hence his drawing upon political friendships and connections for naming conventions. Both of these aspects also intersected. Simcoe did not necessarily choose friends at random.

Rather, he drew on specific friendships with prominent individuals within positions of power in Britain. The British connection becomes evident, then, and underscores the rationale behind names like those of Henry Dundas, who was Home Secretary, and George Yonge, Secretary of War and Baron of Yonge.

Today, Dundas, both the figure and urbanscapes commemorating his legacy in Ontario and Scotland, are the subject of toponymic revision and contention. Within his own time, Dundas fell out of favor, due to various political controversies, chief among them the obstruction of abolitionist legislation. It is worth noting, however, that Simcoe chose for the new highway to bear Dundas’ name in 1793, well before Dundas’ Parliamentary impeachment and public controversies.

Simcoe himself was also opposed to the institution of slavery, whereas Dundas’ stance was more ambiguous. Still, however, Simcoe was part of a British settler project in Upper Canada that enforced a colonial ideology via the developmental and toponymic restructurings of the landscape. Dundas Street, and to a lesser extent Yonge Street, are not simply reflective of individuals who are themselves the targets of revisionism. Rather, these toponyms are part of a wider network of early colonial settler projects in Upper Canada, in which Simcoe was a key protagonist.

Simcoe’s legacy is honored by the memory of him being, among other things, “a great road-builder.” It was not simply the plans of his roads that endured, however, for much of the names chosen by him continue to make up major urban spaces in Ontario, notably Yonge Street and Dundas Street.

The Upper Canadian political order, prioritizing the interests of settlers, reflected the social power which Simcoe and his coevals possessed – as well as the powerlessness of Indigenous communities within the settler structure.

Additionally, it also reflected the agency of one key individual in being able to shape the landscape. Simcoe did represent the settler project, but he also did so rather one-sidedly, and the personal nature of his toponymic choices manifested this will.

It is worth noting that while the concept of vacancy is critical towards understanding the toponymic orientations of this era, it does not entail a complete erasure of Indigenous names in Ontario. Understanding why Mississauga, Toronto, and Etobicoke, for example, retain their names requires its own historical study.

Ever more complicated is the reversion of various names across the early 19th century to their Indigenous originals. Newark would be renamed Niagara, and York would once again become Toronto in the 1830s. However, within Simcoe’s own time this Anglicized settler convention was the direction in public toponymies. In Mississauga, Dundas Street is the contemporary legacy of this process.

[1] Berg and Vuolteenaho. “Towards Critical Toponymies,” 7.

Did You Know?: Nurses Serving in WWI Helped Advance Women’s Right to Vote

DYK that nurses serving in WWI not only made invaluable contributions to the war efforts with their expert care of the wounded or dying soldiers, but they also helped advance women’s right to vote? The First World War marked the first time that female suffrage was seriously considered by policy makers. Thousands of women made the…

Way Back Wednesday: Spring in Mississauga and Creditview Wetland

Yes, I know, as I write this it is -12 degrees, a cold wind is blowing, and snow pants are not yet abandoned for the year. But, for a few brief days, Mother Nature reminded us of the warmer days ahead. Having spent some during March Break visiting and enjoying all things maple, including the…