During the 1805 negotiations the Crown was represented by Colonel William Claus, Deputy Superintendent General of Indian Affairs, with other officials and officers from the 49th Regiment. The Mississaugas were represented by their principal chiefs and a gathering of warriors. The Chiefs of the Mississaugas understood that the Crown wished to share their land, although they were wary of relinquishing too much of their territory. The Mississaugas hoped that a treaty would protect their traditional hunting and fishing rights, and reduce potential conflicts over land and resources in regards to incoming settlers.

During the negotiations Chief Quenippenon (Quinipeno, Kineubenae, Quenepenon), and also known as “Golden Eagle”, produced a map etched on a flat stone that outlined the Mississauga territory under negotiation.

Speaking on behalf of the Mississaugas, Quenippenon stated their concerns:
“… we were told our Father the King wanted some Land for his people it was some time before we sold it, but when we found it was wanted by the King to settle his people on it, whom we were told would be of great use to us, we granted it accordingly. Father – we have not found this so, as the inhabitants drive us away instead of helping us, and we want to know why we are served in that manner … Colonel Butler told us the Farmers would help us, but instead of doing so when we encamp on the shore they drive us off and shoot our Dogs and never give us any assistance as was promised to our old Chiefs … Now Father you want another piece of land – we cannot say no, but will explain ourselves before we say any more … I speak for all the Chiefs & they wish to be under your protection as formerly, But it is hard for us to give away more Land: The young men and women have found fault with so much having been sold before; it is true we are poor, & the women say we will be worse, if we part we part with any more …”

Eventually the Mississaugas agreed to the Crown’s request for territory.

The Crown and the Mississaugas signed two treaties during this negotiation. On August 1, 1805, Treaty 13 was agreed upon, which clarified an earlier treaty from 1787 and involved land east of the Etobicoke Creek.

The following day, on August 2, 1805, Provisional Agreement 13-A was signed. Referred to as the “First Purchase” or the “Mississauga Purchase”, this agreement involved 70,784 acres of land, involving all lands from the Etobicoke Creek to Burlington Bay to an approximate depth of 6 miles from the shoreline. The southern part of the City of Mississauga, from Lake Ontario to Eglinton Avenue, is located within this area. 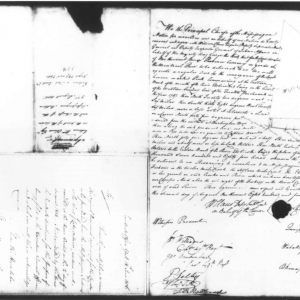 In this agreement, the Mississaugas reserved rights to the fisheries in the Twelve Mile Creek, Sixteen Mile Creek and the Etobicoke Creek, and sole right to the fishery in the River Credit along with one mile each side of the river.

This area became known as the Credit Indian Reserve:
“We, the Principal Chiefs of the Mississague Nation, for ourselves and on behalf of our Nation, do hereby consent and agree with William Claus, Esquire, Deputy Superintendent General and Deputy Inspector General of Indian Affairs, on behalf of His Majesty King George the Third, that for the consideration of one thousand pounds Province currency, in goods at the Montreal price, to be delivered to us, we will execute a regular deed for the conveyance of the lands … containing seventy thousand seven hundred and eighty-four acres, whenever the goods of the aforesaid value shall be delivered to us. Reserving to ourselves and the Mississague Nation the sole right of the fisheries in the Twelve Mile Creek the Sixteen Mile Creek, the Etobicoke River, together with the flats or low grounds on said creeks and river, which we have therefore cultivated and where we have our camps. And also, the sole right of the fishery in the River Credit with one mile on each side of said river.”

Way Back Wednesday: The Early Roots of Lakeview in Mississauga

Back in 1919 Henry Ardagh had a plan to develop a small residential community on the north side of Lakeshore Road and east of Dixie Road, near to the Etobicoke Creek. Ardagh had purchased 15 acres from the Duck family of Lakeview. Ardagh laid out roads and lots as part of his “Ardmore Plan”. The…

Welcome to our sixth installment of “Ask a Historian”. Every week Heritage Mississauga will be taking questions about the history and heritage of Mississauga which our Historian, Matthew Wilkinson, will answer on Thursday afternoons. #ApartTogether, Heritage Mississauga is the source for inquiries and curiosity about our beautiful city as we continue our mandate to research,…