Join us for our Saturday Matinee on August 29, 2020 at 10:00 a.m. on our YouTube channel as we continue to visit our archive of fascinating presentations and lectures.

This week we will be featuring the Mary Fix Memorial Lecture: “A Milestone Lecture by Hazel McCallion” which originally took place on November 18, 2003 at the Mississauga Central Library.

The theme of the highly anticipated lecture was the celebration of civic heritage and spirit during which Hazel McCallion provided a self assessment of her 25 years as Mayor, as of November 2003, and reflected on many her years of service in public office.

Speakers also acknowledge the incredible contributions and dedication to heritage preservation and celebration by the incomparable Mary Fix (1896 – 1972) who was herself a prominent political figure and heritage advocate.

Mary Fix (1896-1972)
﻿Mary Fix was one of Canada’s first female municipal leaders. An accomplished, widely travelled lawyer, she was the reeve of the Township of Toronto (as Mississauga was known before 1968) in 1955 and again from 1957 to 1959. She headed a reform movement dedicated to healthier neighbourhoods, better planning, and an overhaul of antiquated management practices. 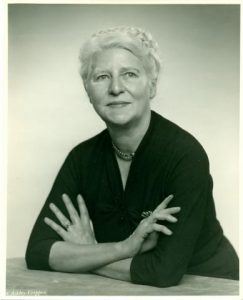 A former international purchasing director for the T. Eaton Company, and fluently bilingual in English and French, she held leadership positions in various national and provincial organizations representing municipalities. She also served a term as warden of Peel County.

Mrs. Fix was a champion of the heritage movement. She was instrumental in the preservation of Bradley House and in the formation of the Toronto Township Historical Foundation, predecessor to Heritage Mississauga (the Mississauga Heritage Foundation).

Always assertive and often confrontational, Mrs. Fix was sharply critical of her “good ol’ boy” predecessors. “They are doing petty jobs,” she complained. “While they argued about $2 boots for firemen, they had no time to look at the $3 million debenture debt they were piling behind them.”

After retiring from politics, Mrs. Fix spent time on many community projects, such as writing about local history and chairing the library board. In her will, she left her property to the municipality. The grounds are a public park, and the modest but charming home has been used by various social-service agencies.

As part of our #ApartTogether program, we are pleased to provide you the opportunity to enjoy art exhibits in the safety of your home. Heritage Mississauga provides a space for Mississauga-based artists to display their art and heritage collections in our Debbie Hatch Discovery Centre at no charge to the artist and invite the public to attend…

Join Us In Celebrating Our 60th Anniversary!

In memory of Marian M. Gibson (1937-2013) Heritage Mississauga was saddened to learn of the recent passing of Marian M. Gibson, a past president of our organization. Born in 1937 in Wales and a resident of Port Credit, Marian passed away on November 8th, 2013. To those who knew her and shared her love of…

How did a Port Credit Stone hooker improve road safety for school children? Well, the tale is both tragic and heartening. Though stone hooking had once been a major industry in Port Credit, by the 1920s and 1930s, the trade had declined. Only one stone hooking schooner remained afloat: the Lillian commanded by her aging…