Piecing Together Black History in Mississauga

February is #BlackHistoryMonth and the theme this year is “February and Forever: Celebrating Black History today and every day” which focuses on the need to acknowledge the contributions of Black Canadians historically and everyday.

Heritage Mississauga continues to research, record, and celebrate Black History in Canada. Research Centre Assistant Justine Lyn has embarked on an arduous research project to gather records on the history and journey of many Black families that came to Canada.

One of the many resources Justine has utilized is census records, which tell fragments of the stories of Black Americans seeking freedom in Mississauga.

Today we are looking at the Spencer Family. 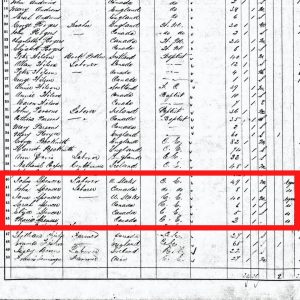 In 1861, a black American family showed up on the census in historic Mississauga, then known as Toronto Township, living in a simple frame house. The 1861 census lists John Spencer (aged 49) and his wife Jane Spencer (aged 40), both of whom were born in the United States.  They appear again in 1871, yet John Spencer Sr. is missing from the record. In an 1873 list of residents in Cooksville, Mrs. Jane Spencer was listed as the head of the household, indicating that John Sr. still was not back in the picture. Without more information, it is hard to speculate on such family matters.

The Spencers had 5 children all together, the eldest being John Spencer Jr. This family caught our attention in particular because John Jr., who was 8 years old in 1861, is listed as not attending school, but rather working as a labourer.

This reminds us that life for early black settlers in the area was far from easy once they arrived here.

One can only imagine how fast a young child in this situation would have had to grow up.

Sarah Louisa Spencer (1855-1929) was the 2nd of five children born to John Spencer Sr. and Jane Spencer. Sarah Spencer shows up in 1911 in the Cobourg Asylum for the Insane, which operated from 1900 to c.1914. This was in the premises of the original Victoria University which had transferred to the UoT as Victoria College. The asylum was established to alleviate the other 7 such overcrowded institutions in Ontario.

She is listed as single without any relations.

Join us on November 17, 2021 at 12:00 p.m. as we continue our Indigenous Conversations with Gimaa (Chief) Stacey Laforme as he discusses Truth & Reconciliation. R. Stacey Laforme is the elected Chief of the Mississaugas of the Credit First Nation (MCFN). Born and raised on MCFN, Chief Laforme has served his community for over…

Welcome to our ninth installment of “Ask a Historian”. Every week Heritage Mississauga will be taking questions about the history and heritage of Mississauga which our Historian, Matthew Wilkinson, will answer on Thursday afternoons. #ApartTogether, Heritage Mississauga is the source for inquiries and curiosity about our beautiful city as we continue our mandate to research,…

Demolition of the historical house and barn

Development at the former Pinchin Farm and the Leslie Log House As many have undoubtedly noticed, the long-anticipated demolition of the Pinchin house and barn recently took place. Unfortunately, it was not possible to save either the historic house or barn due to advance decay and structural uncertainty. It was unfortunate to lose two significant…

Way Back Wednesday: The History of Jan’s Trail