Here at Heritage Mississauga we have, for many years now, proudly flown the flag of the Mississaugas of the Credit First Nation. 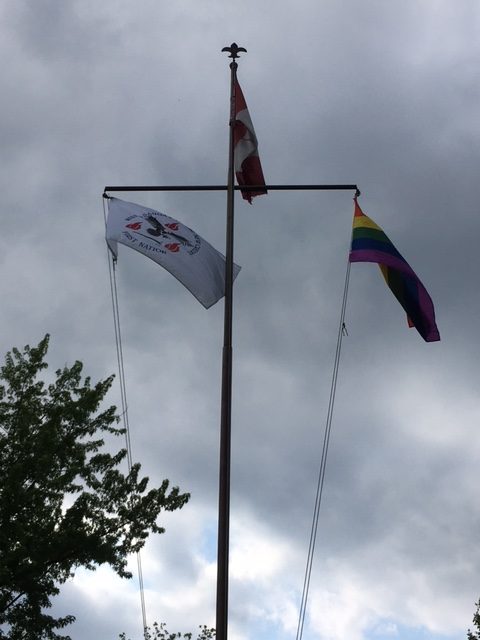 Considering our physical connection to their historic home along the banks of the Credit River, the chosen name for our city, and our strong and mutually supportive relationship, flying the flag of the Mississaugas of the Credit First Nation within their traditional territory is something we feel strongly about, as it reinforces the link between the modern City of Mississauga and the Mississaugas’ traditional territory.

In recent years the flag has been frequently seen at the Mississauga Civic Centre and at other city facilities, often during National Indigenous History Month (June) and Indigenous Peoples Day (June 21), but also increasingly at other times. For residents of our city, the flag is being seen more often. So much so, we received our first inquiry on the symbols depicted on the flag.

The eagle in flight is surrounded by three fires. The three fires are symbolic of the Mississaugas’ traditional alliances. The Council of Three Fires or the Three Fires Confederacy (known in the Anishinaabe language as Niswi-mishkodewinan, meaning “People of the Three Fires”) is a traditional Anishinaabe alliance of the Ojibwe (or Chippewa, including the Mississaugas), Ottawa (or Odawa), and Pottawatomi First Nations. The Three Fires Council is believed to have been formed circa 796 AD at Michilimackinac, long before any European contact.

The blue lettering in the circle that surrounds the central images symbolizes the Mississaugas traditional connections to the water and to the circle of life, reinforcing the central belief that every living thing is related, interconnected, and part of the great circle of life.

Below the central image is a Peace Pipe, which is a stylized representation of the peace pipe that was given to Mississauga Chief Kahkewaquonaby (“Sacred Feathers”, Reverend Peter Jones) in 1838 by Sir Augustus d’Este, who was a first cousin of Queen Victoria. He had secured an audience with the Queen for the Mississauga Chief. The peace pipe was presented to Reverend Jones as a parting gift. It is used in special opening ceremonies to thank the Great Spirit, Mother Earth and the sun. 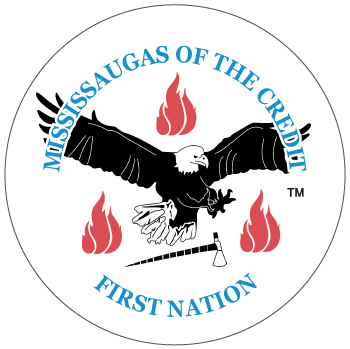 As for the name “Mississauga”, there are several interpretations as to its meaning and origin. The name Mississauga is believed to mean “River of the North of Many Mouths”, although other Anishinaabe words include Missisakis (“Many River Mouths”), Misswezahging (“A river with many outlets”), and Misi-zaagiing (“Those at the Great River mouth”). There are multiple other spellings as well. Additionally a large number of the Mississaugas from the Credit River were part of the Eagle Doodem or clan, the word for which in the Anishinaabe language is Ma-se-sau-gee. It is likely that the modern name of Mississauga, which originated as a European reference to Anishinaabe peoples along the North shore of Lake Huron, is born from a combination of meanings.

The logo, and later the flag, came about as a result of a community consultation process at New Credit in the late 1980s and early 1990s, through a desire to create a new symbol of identity for the Nation and to replace an early letter head logo. In conversation with former Chief Carolyn King, who was involved in the adoption of the new logo, concept submissions were solicited from the New Credit community after earlier design ideas were not approved. Six submissions were received, and the community voted on favoured designs during a Band Council by-election in the early 1990s. The design idea submitted by Stacy Laforme (himself presently Chief of the Mississaugas of the Credit First Nation) received the most votes. Brought before Council, it was determined that minor alterations would be needed to the symbols of the fires, and these were undertaken by artist and graphic designer Shelda Soult-Martin. The eagle itself was designed earlier by Kyle Sault, and incorporated into Stacy Laforme’s initial concept. The process took seven years, but the new logo was adopted by the Band Council in the early 1990s and then incorporated into the flag. Slight alterations were made to the design following the 2019 decision to remove the “New” from the Nation’s name.

In additional to the story of the Mississaugas of the Credit First Nation flag, June marks National Indigenous History Month in Canada and we invite everyone to explore Indigenous history and reflect on the paths that our country has walked over the generations. Colonial settlement and governmental policies have shaped our relationships and perceptions for more than 200 years. The recent heartbreaking news regarding the children of the Kamloops Indian Residential School, the ongoing efforts of the Native Women’s Association of Canada on missing and murdered Indigenous women and girls, the focus on Truth and Reconciliation, and the increasing awareness and recognition of traditional territories, shows how important it is to try and learn about, speak about, and explore the heritage of Indigenous cultures – and to seek ways to address past wrongs and find common pathways forward.

Established in 2009, June marks National Indigenous History Month in Canada, in recognition of the strength, history, traditional knowledge, and enduring cultures of Indigenous Nations across the land. National Indigenous Peoples Day (formerly National Aboriginal Day) is marked on June 21 and connects to the summer solstice. Proposed in 1982 and formally proclaimed in 1996, it is a day for all Canadians to recognize and celebrate the heritage, diverse cultures, and contributions of First Nations, Inuit, and Métis Peoples in Canada.

Flying the flag of the Mississaugas of the Credit First Nation here in the City of Mississauga connects, in a small way, to the recognition and celebration of the Indigenous heritage of this land.

For further exploration on the connections to our city, we highly recommend three books by Professor Emeritus Donald B. Smith:

Sometimes it takes a team. In sorting through recent book donations at Heritage Mississauga, we came across the book Medicine Maid: The Life Story of a Canadian Pioneer by E.L. Hoople. I immediately recalled a conversation I had several years ago with Mac Byard of the Streetsville Historical Society about the book and the author….

Some time ago, local historian, author and storyteller Alan Skeoch penned an article remembering the late Lorne Joyce and recalling the heady days of rum-running in Port Credit. Lorne, himself an avid storyteller, author and marine historian, often regaled members of local historical societies with tales from life on the Great Lakes. I fondly recall…

Join Historian Matthew Wilkinson for our next episode of “Ask A Historian” on August 26, 2021 at 4:00 p.m. on our YouTube channel. This week Matthew answers questions about the historic Britannia United Church, a functional Clarkson refinery that has supported community initiatives, and the doctor known as the “greatest son of Peel”. Each week…