This week in our Fun Fact Friday trivia, we take a look at the history and inspiration for the top hat. 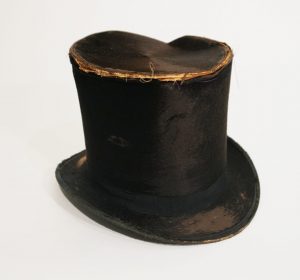 This particular hat is part of our 1812 uniforms and costumes at Heritage Mississauga.

Can you guess what fur top hats were traditionally made from?

Perhaps a little history on the top hat will help inform your answer.

The top hat gained popularity in the 19th century thanks to George Brummel (1778-1840), a men’s style leader and close friend of the Prince Regent, George IV (who became king in 1821). Essential to his ensemble was the new top hat, dubbed the “beaver” as its felt was made from beaver fur. The new craze for beaver top hats brought economic opportunity for the North American fur trade. From its beginnings, the expense and rarity of the beaver top hat became synonymous with upper class wealth.

Making a top hat was often lethal for hatters since mercury was used throughout the process of transforming beaver or rabbit fur to felt – known as “carroting”.  A story passed down in the hat industry gives this account of how mercury came to be used in the process: In Turkey camel hair was used for felt material, and it was discovered that the felting process was sped up if the fibers were moistened with camel urine. As the legend goes, French workmen used their own urine, but one particular workman supposedly seemed to produce a superior felt. This person was being treated with a mercury compound for syphilis, and an association was made between mercury treatment of the fibers and an improved felt. Prolonged exposure to mercury frequently led to mercury poisoning among hatters, with symptoms including early-onset dementia and irritability, muscular spasms and tremors, loss of hearing, eyesight, teeth, and nails. The expression “mad as a hatter” was used to describe these unfortunately hatters, and is immortalized in Lewis Carol’s “Alice’s Adventures in Wonderland” (1865).

Styles of top hats were also worn by men of the Militia as it was the practice that whatever outfit they had was good enough to use on the battlefield until a uniform could be sewn for them. Men frequently put on their best outfit including their only hat to line up for drilling and heading to battle. Women and children would be seen on the battlefront as well in the camps cooking and taking care of the day-to-day operations of the encampment. Camp followers clothing would be sturdy and well-worn as they dealt with cooking fires and maintenance of encampment.

Through the generous support of RAMA and Charity Gaming, Heritage Mississauga has been able to outfit new recruits, update uniforms and purchase much needed equipment to support the presentation of an 1812 encampment. Thompson’s Company travels to all of the sites that are on the battle re-enactment schedule each year representing the 2nd York and participating throughout Southern Ontario. The right uniforms and equipment are so important to telling the story of our local men and women who were involved in the War of 1812. From the special Green Tunic worn by only our regiment to the different styles of dress including Spencer coats, and fishies for women of the day, all bring the story to life for visitors to our events. Muskets, swords, tents, special hats, gaiters, right down to the suspenders detail the lifestyle of the families that made Toronto Township (Mississauga) home during the war.

Did you guess correctly?

Today we celebrate #LincolnAlexanderDay on what would have been his 100th birthday. Lincoln Alexander, an Honourary Patron of Heritage Mississauga, left an indelible mark on the history, heritage, and landscape of Mississauga and the country. Alexander has long been considered a trailblazer and was the first Black Canadian member of Parliament (1968), Cabinet minister (1979)…

Way Back Wednesday: The History of Robert Speck Parkway

Robert Speck Parkway in Mississauga’s city centre is named in 1977 for the former Mayor (and previously Reeve) of Mississauga. Speck was born in 1915 and raised on a 175 acre fruit farm in Clarkson. He was deeply involved life of the community. He was well-regarded as being honest and committed to the at the…