Ruth Teverson Hussey (1915-1984) immigrated from England to Clarkson in 1954 and would come to be known as the “guardian angel of Rattray Marsh”. She loved nature and animals from her childhood and took these interests with her to Clarkson. She worked as a veterinarian and dog breeder, however her falling eyesight forced her to retire in the ‘60s.

The Husseys lived close-by to Rattray marsh and under Ruth and her husband’s leadership, they held annual games for the local Cubs in the marsh with permission from owner Major James 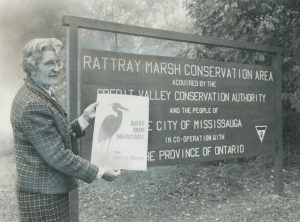 Rattray. After his death, residents were unsure what would happen to the property and marsh, but always hoped it would be preserved in its natural beauty. Ruth became keenly interested in saving the property and when developers purchased the land for luxury housing in 1963, they faced stiff opposition from environmentalists such as Ruth.

Though their pleas often fell on deaf ears, Ruth would not give up the fight for she believed it was “wrong to be destroying the world”. Ruth wrote to the editor of the Globe and Mail in 1967 about the fight to save Rattray Marsh and much to her surprise and happiness, her letter garnered support from across the country! The Rattray Marsh Preservation Committee was formed with Ruth as chair. They gathered more than 2,000 signatures of support and countless letters to Township Council, none of which seemed to make much difference as the financial gains of the property as developments seemed too high to overcome.

In 1974, Ruth received the Carl Nunn Media Conservation Award from the Federation of Ontario Naturalists (now Ontario Nature), officially recognizing Ruth’s commitment to the Marsh. That same year, Toronto Township amalgamated as the City of Mississauga headed by those in council who were personally dedicated to preserving the marsh, including then Councilor Hazel McCallion. The city was willing to preserve the marsh so long as Ruth and her committee raised enough money to match the city’s financial investment, which it did. Rattray Marsh as we know it was opened in 1975.

Though Ruth had been victorious, she never stopped serving the community and was an avid volunteer. In 1982, the Rotary Club of Mississauga named her Senior Citizen of the Year and a year after her death, a dedication stone was placed in Rattray Marsh in her honour. It reads, “Because of her, Rattray Marsh is ours”.

Welcome to our 25th installment of “Ask a Historian”. Every week Heritage Mississauga will be taking questions about the history and heritage of Mississauga which our Historian, Matthew Wilkinson, will answer on Thursday afternoons. #ApartTogether, Heritage Mississauga is the source for inquiries and curiosity about our beautiful city as we continue our mandate to research,…

The Mississauga South Historical Society, founded in 1963, celebrates its 50th Anniversary in style on Thursday, November 14th, 7pm, at Clarke Memorial Hall in Port Credit (161 Lakeshore Road West). The celebration includes guest speaker Alan Skeoch, a tribute to the founders and past presidents of MSHS, and much, much more! Free! Join MSHS for…

COVID-19 INFORMATION UPDATE FROM THE EXECUTIVE DIRECTOR  Dear Friends, What a difference a few days makes.  COVID-19 has basically shut down our city, the Province and most of Canada.  Each day poses new restrictions and cancellations that are designed to eliminate the transfer of the virus.  In response, Heritage Mississauga has decided to extend the…

Sunday September 28, 2014, 11:00am Stavebank Road S. at the Harbour, Port Credit Heritage Mississauga invites you to join us in the celebration of over 200 years of history, as we unveil a commemorative interpretive plaque dedicated to the members of the Mississaugas who participated in the signing of Treaty 13-A, on August 2nd, 1805….