When Terry Fox Passed Through Mississauga

Terry Fox and his “Trans-Canada Run in aid of Cancer Research” (Marathon of Hope) reached Toronto to a great deal of fanfare and a large gathering at Nathan Phillips Square on July 11, 1980. Along his route, as awareness for his cross-Canada marathon grew, communities began preparing for Terry’s arrival in their towns and cities with formal (and informal) welcoming ceremonies, often with local dignitaries and politicians officially welcoming him.

Along the planned route of the marathon in Southern Ontario, there were a few pre-planned dates. July 10 at the Scarborough Civic Centre, July 11-12 in Toronto, July 14 at Hamilton’s Royal 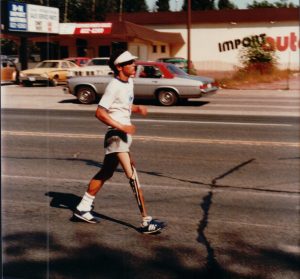 Botanical Gardens, and so on. Terry threw out the ceremonial first pitch at a Toronto Blue Jays game.  Terry departed from Toronto City Hall at 9:30 am on July 13. His route to Hamilton brought him through the young city of Mississauga. The date was Sunday, July 13, 1980. His path through Mississauga took him along Lakeshore Road. There was a police escort provided by the Peel Regional Police.

Many people lined the route along Lakeshore Road that morning, and others joined the run as Terry passed; some running, some riding bicycles, all cheering, shouting encouragement, and clapping as he passed. Terry stopped at a restaurant for lunch in Mississauga and then for a short 2-hour nap at a motel (the restaurant and motel locations are not currently known). In the early afternoon, running along Lakeshore Road, Terry passed through Port Credit, Lorne Park and Clarkson.

A welcome ceremony was organized by the city of Mississauga in a small park property that the city owned, and maintained greenhouses on, at the Northeast corner of Southdown Road and

Lakeshore Road. This park is known today as Twin Spruce Park. Terry was welcomed by Mayor Hazel McCallion, who gave him a kiss on the cheek, and said: “Canada needed something and you’ve done it.” One woman in the crowd shouted: “You’ve got the heart of a lion, son.” Mayor McCallion presented Terry with a bronze plaque and a $1000 cheque from the City. Another $1000 cheque was presented on behalf of the residents of Streetsville. Terry also received a Mississauga T-shirt, which he wore as he continued his run after the ceremony. In all, it is estimated that Terry’s run through Mississauga raised $10,000 in donations.

Other dignitaries who welcomed Terry in Mississauga included Mississauga North MP Doug Fisher, who presented Terry with a copy of the Hansard (Parliamentary debate transcript) signed by Prime Minister Pierre Trudeau, and a House of Commons resolution expressing admiration and encouragement.

Terry was not in Mississauga for very long – only around 6 hours in total. His marathon reached Oakville early that evening, where he stopped for dinner at the Oakville Holiday Inn. By the early morning of July 14 he was in Burlington.

Back in Mississauga there was an interest in commemorating Terry and the Marathon of Hope with a permanent reminder in some fashion. But what? The city was growing and developing rapidly and was only 8 months removed from the Mississauga train derailment and emergency evacuation of 1979. There was not yet a formal process in place.

One of the city’s newest facilities at the time was the Mississauga Valley Community Centre, which opened in September of 1979. The pool and fitness centre were named the Terry Fox Pool and the Terry Fox Fitness Centre in honour of Terry. Later, in the early 1990s, a portion of Second Line West was renamed Terry Fox Way – a permanent reminder on our landscape honouring Terry’s courage and the Marathon of Hope.

At 9:00 a.m. on September 2, 1945 aboard the USS Missouri in Tokyo Bay, the Japanese Instrument of Surrender was signed between representatives of the Japanese Empire and the Allied forces, formally bringing to an end the hostilities of the Second World War (although, in terms of international diplomacy, a State of War continued between…