This too shall pass. As we are all challenged today by the COVID-19 virus, we will look back at past epidemics and health challenges, with a particular focus on those individuals who sought to aid the sick, and on how our landscape remembers those past times. Please help up capture to story of how COVID-19 pandemic has affected you here in Mississauga. Please share stories and images at [email protected] or https://www.facebook.com/HeritageMississauga 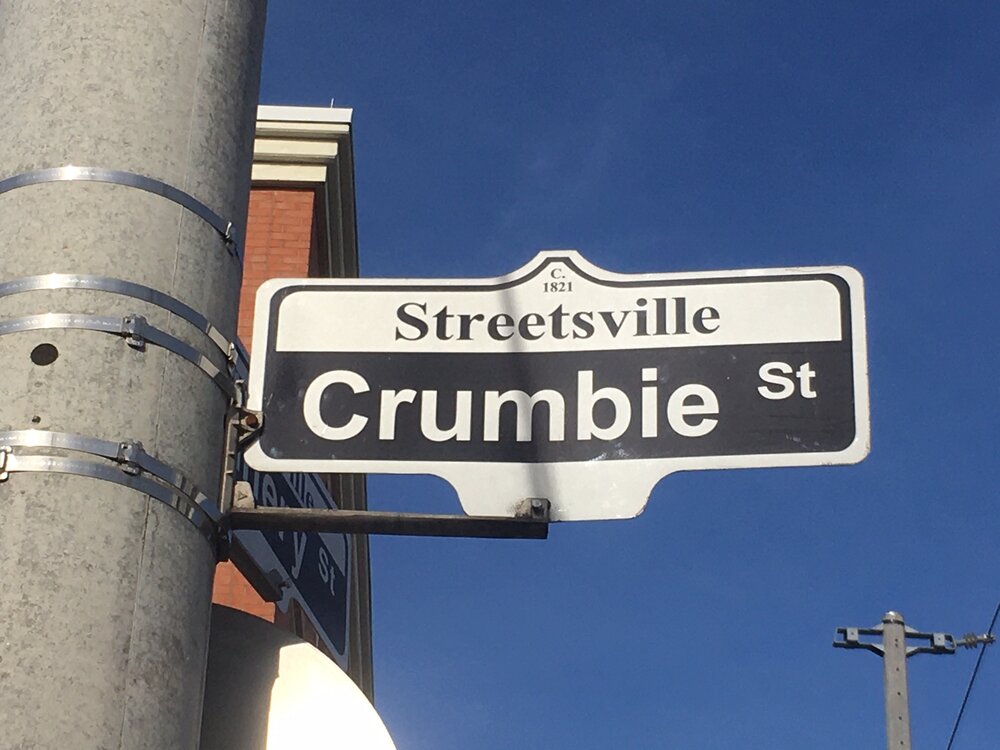 But back to the focus of this article: there is a short, truncated stub of a road, physically speaking, in Streetsville known as Crumbie Street. So short in length that it is home to a single road address. Many may even confuse the street as the laneway or access point that leads to a parking lot. But at its intersection with Tannery Street and Broadway, you can find the road sign proclaiming “Crumbie Street”. But who was Crumbie?

Doctor John Crumbie (1794-1877) was born in Stonykirk, Scotland where he received his early education and taught in the parish school. In 1819 he immigrated to Canada with his family. His father settled in Chinguacousy. In 1827 John graduated from medical school in Fairfield, New York, and in 1829 he established his medical practice in Streetsville, becoming only the 2nd licensed doctor in Peel County. He became a familiar figure on horseback as he visited the sick and needy, and is circuit was approximately 50 square miles.

Many of Doctor Crumbie’s patients were poor, and it is recorded that he did not charge for his services if a person could not afford to pay, and he always carried extra provisions, such as clothing or food for those who needed it. In time, he became lovingly referred to as the “Old Doctor”, and he served his community faithfully, right up until his passing, even as his eyesight failed.

He had a substantial brick house built along the banks of the Mullett Creek. Crumbie Street, today, recalls the entrance to his large property, which also fronted onto Queen Street.

Doctor Crumbie was described as frank, cheerful and honest. He had a moral fearlessness and was a highly respected citizen. He had a keen interest in education, and for many years he was one of the County Examiners, using his considerable influence to improve schools.

During Doctor Crumbie’s time several epidemics swept through historic Mississauga, notably malaria in 1830, smallpox in 1831, cholera from 1846-53, and again from 1865-68, and perhaps the most challenging locally was diphtheria in 1853-54 and again in 1860. These epidemics would have challenged the doctor’s skills and available medical knowledge in the era before accepted vaccines. Cholera and diphtheria, viewed at the time as diseases of the blood, were often treated with combinations of calomel, opium and bloodletting. However, links began to be established between diseases and sanitation and clean water. Local medical boards were established, and sanitary measures passed, as doctors began to rally together to fight epidemics. Doctor Crumbie was a particular advocate against the sale of tainted food and for adequate household sanitation. Historically many medical advances, such as understanding the transmission of diseases and the use of vaccines, have developed as doctors sought to remedy the sick during epidemics.

We remember one such doctor in Doctor John Crumbie, who was on the medical front lines during several historical epidemics that swept through this place, and did his part in aiding those affected to the best of his skill and medical knowledge.

It can be found on their website here: https://www.modernmississauga.com/main/2020/3/25/the-history-of-the-mississaugas-crumbie-street

Renewing Your Membership Could Get You a Dream Vacation!

On behalf of the Heritage Mississauga staff and Board of Directors we wish to thank all of our members for their support over the years, as a not-for-profit, we rely on the support of our incredible members. Heritage Mississauga is the only independent city-wide organization devoted to heritage matters. We are Mississauga’s definitive heritage source…

The former Riviere Fruit Farm remembers an earlier agricultural landscape that, in our not-so-distant past made up much of Mississauga. This property is part of the Credit Reserve lands that were included in treaties in 1820 between the Indigenous Mississaugas and The Crown. This property was first granted to Thomas Silverthorn in 1832. Subsequent owners…