This is part three of a 5-part article series that explores Colonial connections on our landscape here in the City of Mississauga. This series was written by UTM graduate Omar El Sharkawy as part of his Historical Studies Internship placement with Heritage Mississauga through the University of Toronto Mississauga Historical Studies Internship Program. This week’s article explores the 1965 renaming of Town Line to Winston Churchill Boulevard. It is not the only reference to Sir Winston Churchill (1874-1965) on our landscape: Churchill Avenue in Malton was named in connection with the Victory Village subdivision in 1942-43, and more recently the Churchill Meadows community and Churchill Meadows Boulevard also connect in name to Winston Churchill. 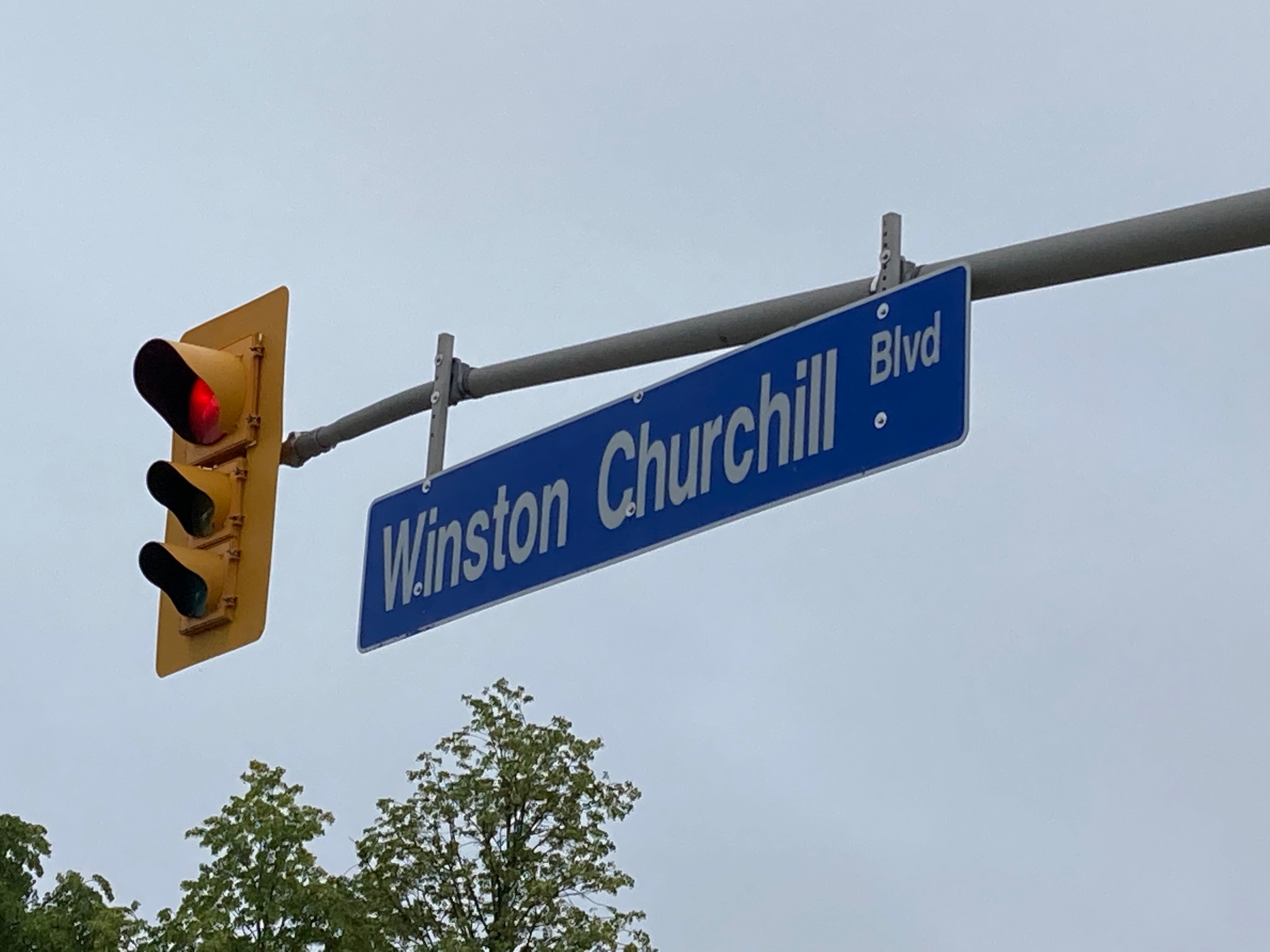 In 1965, the same year in which Canada symbolically shed most of its Britishness with the adoption of the new Maple Leaf flag, Mississauga’s new major highway was inaugurated in honor of the then recently deceased Winston Churchill.[i]

Why was this case, and on whose authority was the new road christened “Winston Churchill Boulevard?” The case of the new highway and its intersection with such a key decade in the development of “Canadianness” further complicates how we can interpret Mississauga’s own British-defined nationalism.

Was it popular and wide-reaching across the community, as was probably the case with Truscott Drive, or was it the choice of a narrow group that spoke on behalf of a specific vision for the public urbanscape, like with Park Royal? More importantly, this was no small commemoration either.

Churchill’s legacy did not adorn an auxiliary sideroad or residential cul-de-sac – it was widely spatialized onto one of Mississauga’s largest urban stretches. What, then, is there to make of the history and place of Winston Churchill Boulevard?

The name itself was chosen by a notable town councillor at the time, Ron Searle.[ii]

The late Searle was quite well-known within Toronto Township/Mississauga’s politics, a long-time citizen politically active within the town’s civic affairs. His personal character plays a critical role within the story as well, as he was a notable royalist, himself British born, who served on behalf of Canada and Britain in the Second World War.

Searle was noted for his particularly strong attachment to British identity and the institution of the Crown. His peers on the town council, such as Robert Speck and “Chic” Murray, while perhaps not as pro-British were similarly conservative. Although the town council was democratically elected, it still largely represented a political old guard that was not entirely on the advance line of new Canadian identity-making.[iii]

Searle, on the vanguard of an elite British-defined project of nationalism in the postwar period, vested Mississauga with the memory of Britain’s most significant contemporary figure – Winston Churchill. 1965, although an unusual date for this type of nationalism, was actually quite fitting.

Earlier that year, Churchill had died, and the road itself was kind of a commemoration of his passing. On a grander scale, however, it was not a passive acknowledgement of the memory of his death: it was also a representation of his postwar deification into the canon of British nationalism.

This Churchill myth emerged particularly strongly in Canada after 1945.[iv] Whereas his popularity was receding greatly in Britain, where he was most politically active and visible, Churchill remained better venerated in Canada.

The high point of his celebration in the country was arguably in 1952, with the hosting of an official ball by Canada’s Parliament at the Château Laurier entirely in his honor.[v] There, he delivered a speech, transmitted via radio, that reached his widest ever audience in North America.

But here we ask again: was this Churchill myth universal and ever enduring? It did hold popular sway over segments of the Canadian population, as seen in several “Churchill societies” that arose in the postwar North, though whether they represented a popular consensus is doubtful.[vi]

Churchill’s worldview and politics remained widely celebrated by an Anglophone elite above all else, among them Searle. Whatever popular sway he may have had, would it have been as persistent among most ordinary Canadians, especially by the 1960s?

Whether or not that was the case, Searle and his fellow councillors made the Churchill myth a reality in Mississauga, and in no small part either given the significance of the road holding the namesake. The decision to name the boulevard after Churchill may not necessarily speak for community matters, but rather the ideals contained within the council itself.

Social discourses are not always reflected in those who are established and in possession of power, as was the case in the old career politicians of Mississauga. Searle and the council’s attitude towards a British-defined nationalist mythos, like Churchill’s beliefs, were arguably out of date even within their own time.

Is the toponymy forwarded by a narrow group, emphasizing specific visions of nationalism and mythmaking, a decision that speaks for the spirit, concerns, and priorities of this entire period in Mississauga and Canada’s histories?

It can be easy to relegate the question of public naming controversies to this answer, believing that a given road name was simply “part of the time period.” This can hold true, but examining whose authority determines the shape of the urbanscape can nuance an urban toponymy’s history.

Searle and his peers had a specific interpretation and perspective regarding Churchill’s legacy, and they were certainly not a minority around the world given the enduring Churchillian legacy of the Second World War.

Concurrently, they did not speak for all of Mississauga’s citizens, nor did they entirely represent the most popular nationalism of postwar Canada.

Although calls for name changing in Mississauga have been few and far between, Winston Churchill Blvd was notably the target of recent scrutiny. A circulating petition cited Churchill’s checkered past and rejected the memory which the boulevard’s name stands for.[vii]

Churchill’s contemporary legacy has been subject to extensive revision – aided by the surfacing of subaltern, working-class, colonized, and socially marginalized voices. He no longer retains the same mythic status he once did.

The struggle over Winston Churchill, however, can be seen as not just over the figure, although that is an important component of it, but also one over democratizing the landscape itself given the narrow voices which determined its public importance.

Winston Churchill Boulevard is also not an exception. Along with Park Royal and Truscott Drive, it was interconnected into a theme of British defined Canadian nationalism in the public and toponymic sphere.

This mid-century toponymic convention reflected the vision of specific authorities and narrow understandings of identity which do not entirely speak for all within that given time and place.

As demonstrated, the sphere of postwar identity in Canada was rather complex, unusual, and still in flux. Mississauga, within this time period, became an avenue for specific social and historical interpretations to be planted into the urban sphere.

The urban toponymies which emerged in this process are, in a strange duality, both a part of and the exception within that period of history in Mississauga and across Canada.

Regardless, however, these names continue to be a prominent part of the city’s contemporary landscape, and unlocking the specificities of these histories is part of the process of revaluating the ideologies engraved into these present urbanscapes.

Each Friday. Heritage Mississauga brings you a Fun Fact about the history of Mississauga. See if you can find the answer before we post it! Question: Have you ever seen Stephen Cruise’s beautiful sculpture entitled “Familia” at Harold E. Kennedy Park? The sculpture is reminiscent of many aspects of Port Credit history and industry. Symbols in…