Way Back Wednesday: A Shipwreck with a Possible Mississauga Connection 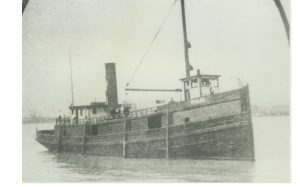 You will have to follow my train of thought here. I had the chance to spend part of the weekend in Bayfield, Ontario as part of a family tradition. While there, we spent one evening in Pioneer Park, high on the bluffs overlooking Lake Huron, watching the sunset. In the park is the salvaged remains of a massive rudder from the shipwrecked schooner Malta, which sank near the mouth of the Bayfield harbour in 1882. Out of curiosity, I explored the story of the shipwreck, as much as I could find. I have always been fascinated with the stories around shipwrecks. In the process of reading about the Malta, I came across a reference to another Lake Huron shipwreck from 1891, that of the Lewis Hotchkiss. The name rang a bell, somewhere in the foggy cobwebs of my memory.

I vaguely recalled a story relayed by the late Lorne Joyce about two Port Credit boys walking to Goderich after their boat was lost to take the train back to Toronto and home. He referred to the boat as the Hotchkins and the sailors as Dorland and Hutchinson. Unfortunately, that was all I had. Dorland and Hutchinson certainly are family names from the early Port Credit area. But could Lorne’s reference to the Hotchkins actually be the Hotchkiss? (Or perhaps I recorded it incorrectly – knowing Lorne, I’m inclined to say the latter is more likely).

With that as a start, I thought it would be interesting to dig into the story of the Hotchkiss (that, and I could find no reference to a boat called the Hotchkins). The Lewis Hotchkiss was built by Hotchkiss & Morrill in Collingwood in 1870, and launched in 1871, and was owned by Archibald Hamilton Campbell in Toronto. Campbell was the owner of the Muskoka Mill and Lumber Company. The Lewis Hotchkiss was a massive, 2-masted, wooden lumber barge. When she was built, the Hotchkiss was the largest timber barge on the Great Lakes. She was 210 feet long, 1001 tons burden, and her home port was listed as Toronto.

In late August of 1891 the Hotchkiss was downbound on Lake Huron under the tow of the Canadian tug Wales. The Hotchkiss was heavily laden with over 1.2 million board feet of lumber on board. The Wales and the Hotchkiss had left Muskoka Mills in the morning of August 26, and everything was going well until they were caught in a heavy gale around 11:30 pm on Thursday, August 27, 1891, about 25 miles off of Goderich. The Wales sprang a leak and struggled mightily to make headway in the storm. The Wales was forced to cut the tow line and try to save herself, leaving the Hotchkiss to her fate. The Wales arrived in Port Huron on August 28 heavily damaged and in “sinking condition”.

The Hotchkiss, left adrift and at the mercy of the storm, had begun to break up. For a time, it is likely that her cargo of wood helped to keep her afloat. The crew of seven initially sheltered near the cabin, until it was torn from the deck. The cook, a young woman, was washed from the cabin into the hold, but with the hold so full of water the crew was able to pull her back up. As the Hotchkiss was breaking up, the crew made the decision to get into the yawl and try to row for shore. And they made it. The Hotchkiss is believed to have broken up and sank roughly between Bayfield and Goderich. Wreckage washed up near Goderich. The crew, after abandoning the Hotchkiss in their small yawl, made landfall at Port Blake, near Grand Bend. All seven survived – the captain, 5 crew, and the cook. Unfortunately, I have not been able to find any reference that gives their names. However, in this, I would have to think that Lorne Joyce knew of the connection.

Perhaps what was most fascinating was an article in The Globe newspaper on September 5, 1891 that recounted the story of the shipwreck from the captain (whose name is not given) on the fate of the Lewis Hotchkiss:

“After the gale striking us the sea made very fast, so that in a very short time the barge was rolling quite heavily, as we were running in the trough of the sea, heading for the American shore. Shortly before the tug left us we were struck by a tremendous sea and the barge gave a heavy lurch, when the deck load went off, taking the mainmast with it, the foresail having gone some time before. We lay in the trough of the sea for about three or four hours, when she waterlogged. Part of the crew then got in shelter of the lee side of the cabin, and the cook with two others were in the dining room and remained there for some time. A heavy sea struck the aft end of the cabin and washed to cook down through a hatch in the deck into the hold. But … with the hatch being full of water one of the men caught her and with the help of another pulled her out, very little the worse. The next heavy sea drove in the side of the kitchen … finding we were likely to be washed off, we watched for a chance when the boat was a little steady, and made our way to the anchor deck forward, where we stayed until 7 in the morning. When I saw the hull was going down … I then told the men that our only hope was the (yawl) boat … one the mean was able to swim to the boat which had broken free (which was drifting half full of water a short distance away) with a line, when we hauled her up to the lee side of the deck and bailed her out and … we concluded to take our chances in the boat and try to reach land. The left the wreck about 8 and we made land ten miles below Bayfield at 3 in the afternoon, and it was almost a miracle, as we were nearly swamped several times; the whole crew losing everything but the clothes they had on and having nothing to eat from 6 o’clock the night before. A man came running up … he kindly took off his coat and gave it to the cook, who was very grateful for it, as she had nothing on but a wet cotton dress for twelve hours. We walked half a mile to a farm house, where we made known our condition and ventured to sit down by the stove to dry our clothes and get a little warm … After leaving the farm we walked to a tavern, which seemed to me to be about two miles, where we were kindly used and soon made comfortable.”

The wreck of the Lewis Hotchkiss in 1891 MIGHT have a Mississauga connection (again, I will have to lean on Lorne’s story here), but specifics are unknown. I have also not been able to locate a picture of the vessel itself. But the story, the account of which incredibly survives, highlights the deadly challenges that faced those mariners who made their living plying the waters of the Great Lakes, including countless sailors out of Port Credit.

This week on Ask A Historian, Matthew Wilkinson welcomes back Richard Collins, Past President, Mississauga South Historical Society, Interpreter, and local Historian, as they explore Port Credit’s marine heritage. Richard and Matthew delve into the key historic figures who had dreams for the future of Port Credit, both realized and lost, as well as the…

Frightful Fridays: Something Lingers at The Cawthra Estate

In our new “Frightful Fridays” series, we will be exploring some of the folklore and haunted sites in Mississauga as well as feature some stories from our “The Darker Side: True Tales of Murder and Mayhem from Historic Mississauga” series. This week we will look at the Cawthra Estate where many people report that something…

When setting out to learn more about our city’s early Black history, it is an all-encompassing endeavor that can sometimes leave us with more questions than we began, but it’s always an enriching experience. Such is the case with the Canada West census in 1861, which shows a Black family living in Toronto Township, Peel…