The urban legend of Buffalo Bill’s connection to Mississauga

Call it an urban legend … or at least a rural legend in its origin.

There is a plaque in historic Dixie Union Chapel that references the baptism of one Colonel William Frederick Cody, better known to the world as “Buffalo Bill”. 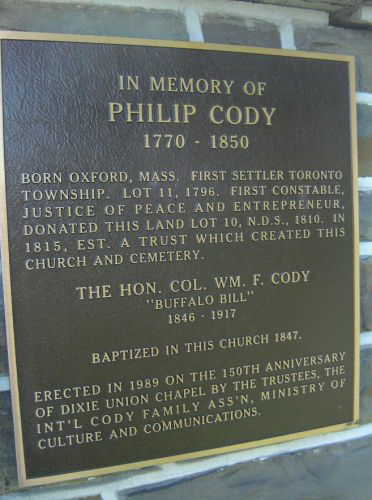 There are entire books dedicated to the story of Buffalo Bill Cody, and we could not do his life story justice here in a few short lines. In short, he was one of the most well-known showmen of his era. Even today, over 100 years after his death, his name remains well remembered, with at least four museums in the United States dedicated to his life and times, and countless published books.

So what about Cody and Mississauga?

There are multiple references to be found mentioning his visit to historic Mississauga in his youth and his subsequent baptism here, long before he went onto international fame with his “Buffalo Bill’s Wild West” shows.

But is it true? After all, there is a plaque inside Dixie Union Chapel referencing his baptism here in 1847.

Buffalo Bill did have Canadian roots. His grandfather, Philip Cody (1770-1850), although born in the United States, was an early resident here after having acquired a 200-acre lot here in 1807. His property was located on the south side of Dundas Street near modern Cawthra Road. Philip operated an inn, known as Cody’s Tavern.

In 1815 Philip acquired land on the north side of Dundas Street, and in 1816 formally donated 1 acre towards the establishment of a church and cemetery – today known as Dixie Union Chapel and cemetery.

The cemetery was already, informally, in existence – previous land owner Moses Teeter had allowed burials here in 1809/1810. Philip’s 1816 transfer of 1 acre to trustees made it official. Philip, along with many of his neighbours, including Moses Teeter, served with the 2nd York militia during the War of 1812. And Buffalo Bill’s father, Isaac Cody (1811-1857), was born here in historic Mississauga (Toronto Township) in 1811.

In 1829, Philip Cody and most of the Cody family left historic Mississauga and moved to Ohio. But at least one family member remained behind: Philip Cody’s daughter (Isaac’s sister and Buffalo Bill’s aunt), Nancy Cody, had married Amos Merigold in 1823, and resided in the Clarkson area. By 1863 Nancy and Amos Merigold had relocated to Southwold Township in Elgin County, and later settled in Burford. They had 10 children, all born in Canada.

But back to Buffalo Bill and the legend of his baptism.

Buffalo Bill was born in Iowa in 1845 (or 1846), and the family moved quite a bit during difficult early years.

There are some uncited references to his having lived here in historic Mississauga for part of his youth, but they are unproven. Most notably, those references are absent in his own autobiography “Buffalo Bill’s Own Story of His Life and Deeds” (1917), as well as noted biographies “An Auto biography of Buffalo Bill” (1920), and “The Lives and Legends of Buffalo Bill” (1979).

In fact, in Buffalo Bill’s own narrative, there would have been very little ability (or time) in his youth to have travelled to Canada, let alone reside here. There is reference in to him having visited his relations in “the north country” in the 1864, but it is not clear if he was referring to Canada, or to family who resided in Ohio. Buffalo Bill makes no reference to his baptism. If he was referring to Canada, then presumably he was speaking of his aunt Nancy’s family, which is 1864 were residing in Elgin County, not here.

Buffalo Bill did visit the Toronto area at least twice with his Wild West shows, in 1885 and 1897. His visit was widely covered in the newspapers of the day. He was interviewed by The Globe on July 5, 1897: “Do you know I think I can call myself a Canadian. My parents were Canadian, and relatives are yet living in the neighbourhood of Woodstock. Mr. E.A. Goodman, the druggist on Yonge Street in this city, is related to me by marriage, while I also have relatives in St. Catharines. My grandfather was at one time a resident in Toronto.”

That being said, at the time of his travels to Toronto in 1885 and 1897, from the best of our knowledge he no longer had direct family residing here in historic Mississauga. Buffalo Bill certainly had some connection to his Canadian cousins – all of those he referred to in his 1897 interview connect to children of his aunt Nancy, some of whom resided in southern Ontario.

We have traced some of Nancy’s children in the 1890s to living in Alma, Brantford, Burford, Ingersoll, Port Elgin and St. Catharines. The druggist Buffalo Bill referred to was Elbridge Alberta Goodman of Oshawa, who first cousin James Alvin Goodman was married to Buffalo Bill’s sister, Julia Melvina in Nebraska.

Given that Buffalo Bill was nearby in Toronto in 1885 and 1897, it is certainly possible that he visited the area where his father was born, although he made no direct reference to such an occurrence. However Buffalo Bill was certainly aware of his Canadian roots.

While in the vicinity he may have visited his grandfather’s old inn as it was still standing, he could have visited Dixie Union Chapel, and he might have even attended a service at Dixie Union Chapel and perhaps taken communion. But baptized here as a child in 1847? It seems unlikely. It would certainly be fascinating if evidence came to light to prove it.

On May 27, 1918 Art Murdock purchased 105 acres along Lake Ontario in the Clarkson area, and commissioned renowned architect and designer Stanley Thompson to lay out a golf course. A clubhouse, pro shop and nine-hole course were ready for the 1922  season. The Lakeshore Country Club officially opened on August 26, 1922. The course…

In Memory of a friend of Heritage in Mississauga

Remembering Leonard Walsh (1956-2013) Obituary: After a brave and valiant fight, “Lenny” gently passed at Trillium Hospital on August 28, 2013. He will be forever missed by his loving partner Maureen, brothers Ronnie, Kenny, Robert, sister Geraldine and many nieces and nephews. Predeceased by his parents Gerald and Irene Walsh. Leonard was a real estate…