At 9:00 a.m. on September 2, 1945 aboard the USS Missouri in Tokyo Bay, the Japanese Instrument of Surrender was signed between representatives of the Japanese Empire and the Allied forces, formally bringing to an end the hostilities of the Second World War (although, in terms of international diplomacy, a State of War continued between Japan and most of the allies until the 1952 when the Treaty of San Francisco came into effect, re-establishing peaceful relations.)

Canada’s representative at the signing 75 years ago was Colonel Lawrence Vincent Moore Cosgrave (1890-1971). Colonel Cosgrave was born in Toronto and graduated from the Royal Military College in 1912. He served in the First World War as a junior officer with the Canadian Field Artillery, and was twice awarded the Distinguished Service Order (in 1916 and again in 1918), and was later presented with the French Croix de Guerre. Cosgrave was wounded in action, losing vision in one eye.

Cosgrave recalled that his friend, Lieutenant Colonel John McCrae, wrote the poem “In Flanders Fields” on a scrap of paper on Cosgrave’s back during a break in the artillery barrage during the Second Battle of Ypres on May 3, 1915. McCrae served as the Medical Officer and Major in the 1st Brigade of the Canadian Field Artillery – the same unit that Cosgrave served with. The poem was first published on December 8, 1915. On October 5, 1963 Cosgrave unveiled the Colonel John McCrae Memorial, at Boezinge, Ypres. In Cosgrave’s later career he served as the Canadian Trade Commissioner in Shanghai (1925-1935), Melbourne (1935-1937) and Sydney (1937-1942). During the Second World War, he was appointed as the Canadian Military Attaché to Australia. But I digress.

On September 2, 1945 Colonel Cosgrave was the Canadian representative at the official surrender of Japan, and signed the Japanese Instrument of Surrender on behalf of the Dominion of Canada. When it came Cosgrave’s turn to sign the document, he mistakenly signed his name one line too low on the Japanese copy of the documents. His loss of vision in the First World War may have contributed to the mistake. Each succeeding representative then signed on the line below their assigned line. 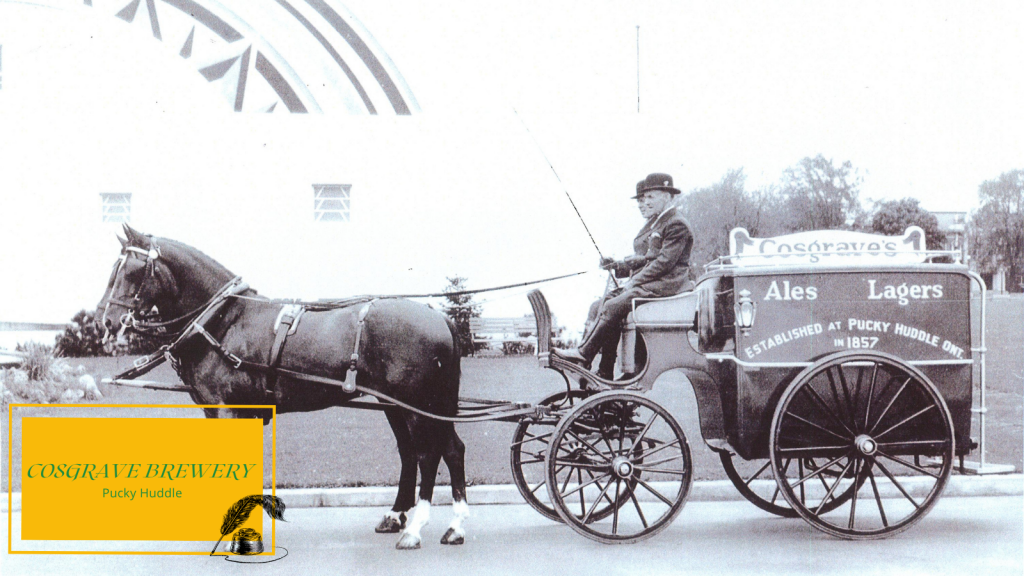 So what has this to do with Mississauga, you might wonder?

Colonel Cosgrave’s grandfather was Patrick Cosgrave. Born in Ireland, Patrick immigrated to Canada at the age of 38, and settled, at first, in historic Mississauga near the hamlet of Pucky Huddle (around the modern intersection of Burnhamthorpe Road and Tomken Road). In 1857, together with partner John Moss, Patrick established Cosgrave Brewery at Pucky Huddle, and specialized in a strong Irish porter. A few years later Patrick moved his brewery to nearby Toronto and purchased the West Toronto Brewery. Later partners included Charles Sproatt, Eugene O’Keefe and Robert Elmsley. In time, Patrick’s sons John and Lawrence were apprenticed into the trade, and both became partners in the 1870s. In 1878 Lawrence Joseph Cosgrave took over management of the company, by then known as Cosgrave & Sons Ltd. True innovators, Lawrence and John invented a specialized bottle pump, allowing them to fill 7,200 bottles a day and Cosgrave beer was shipped abroad to Australia, South Africa and the West Indies.

In 1934, the Cosgrave Brewery merged with E.P. Tayler’s Dominion Brewery to form the Cosgrave Dominion brewery, which in turn, in 1945, became part of the Canadian Brewing Corporation.

In terms of connecting the dots, in 1945 Colonel Lawrence Cosgrave, looking weary and older than his 55 years of age, shakily signed his name on the wrong line. 88 years before that moment, back in 1857, his Irish-born grandfather Patrick established a brewery here in Mississauga.

Today the world is saddened by the news of the passing of His Royal Highness Prince Philip, Duke of Edinburgh (June 10, 1921 – April 9, 2021) just two months shy of his 100th birthday. Prince Philip was the longest-serving consort to a monarch in British history, and visited Canada over 20 times to support his…

Did You Know Pink Shirt Day originated in Nova Scotia in 2007 when highschool students David Shepherd, Travis Price and their teenage friends took a stand against bullying when a fellow male student was being bullied for wearing a pink shirt? The students organized a protest distributing pink t-shirts to all the boys in their…

Today’s article is, as the saying goes, clear as mud. This article is about a street name: Byng Street. The only problem is that the street has had a few names, and it is not called Byng Street now. So, we will step back in time and explore the evolution of the street, and other…

Join us for our Saturday Matinee on August 29, 2020 at 10:00 a.m. on our YouTube channel as we continue to visit our archive of fascinating presentations and lectures. This week we will be featuring the Mary Fix Memorial Lecture: “A Milestone Lecture by Hazel McCallion” which originally took place on November 18, 2003 at…