Did You Know?: Madame Anna Guérin

DYK  In the 1920’s, Madame Anna Guérin was determined to have an international promotion of the poppy as a symbol of remembrance and a means of fundraising?

Inspired by American humanitarian and academic Moina Michael and her poem “We Shall Keep the Faith,” in which she vows to wear the poppy to remember the war dead, Anna Guérin adopted the distribution of the Poppy on Armistice Day as a fundraiser for veterans and those left destitute by war.

Anna had experience in fundraising and had worked with many women’s groups, many of whom were war widows. She recruited women as volunteers to create a network of distribution and collection. 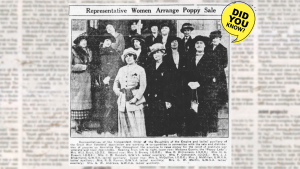 In 1920, she helped organize the commission of 1 million poppies in France which was supported by the British Legion. The poppies sold out, and the British Legion commissioned 8 million more. She then continued to promote the Poppy and fundraising in various other countries.

By 1922, Canada had adopted the tradition and poppies were made by disabled veterans, via the Department of Soldiers’ Civil Re-establishment.

Today the Poppy is a recognized symbol of remembrance for the soldiers and their sacrifices in Canada, the United States, and throughout the Commonwealth nations.

It is the emblem of the Canadian Legion and is proudly worn by Canadians on Remembrance Day.

Happy 100th anniversary to the Poppy!

How did a Port Credit Stone hooker improve road safety for school children? Well, the tale is both tragic and heartening. Though stone hooking had once been a major industry in Port Credit, by the 1920s and 1930s, the trade had declined. Only one stone hooking schooner remained afloat: the Lillian commanded by her aging…

The Garden of Remembrance at the Grange

Ask A Historian: History of The Battle of Vimy Ridge

Join Historian Matthew Wilkinson on our YouTube channel for a special episode of “Ask A Historian” on Friday April, 9 2021 at 4:00 p.m. This week Matthew welcomes Greg Carraro, Vice President of the Heritage Mississauga Board of Directors who is an educator, history enthusiast, and an 1812 reenactor. April 9, 2021 represents a very…