Way Back Wednesday: Spring in Mississauga and Creditview Wetland

Yes, I know, as I write this it is -12 degrees, a cold wind is blowing, and snow pants are not yet abandoned for the year. But, for a few brief days, Mother Nature reminded us of the warmer days ahead. Having spent some during March Break visiting and enjoying all things maple, including the return of the wonderful tradition of Maple Magic at the Bradley Museum, coupled with the lifting of some of the Covid safety measures, has me cautiously optimistic about the Spring season ahead. 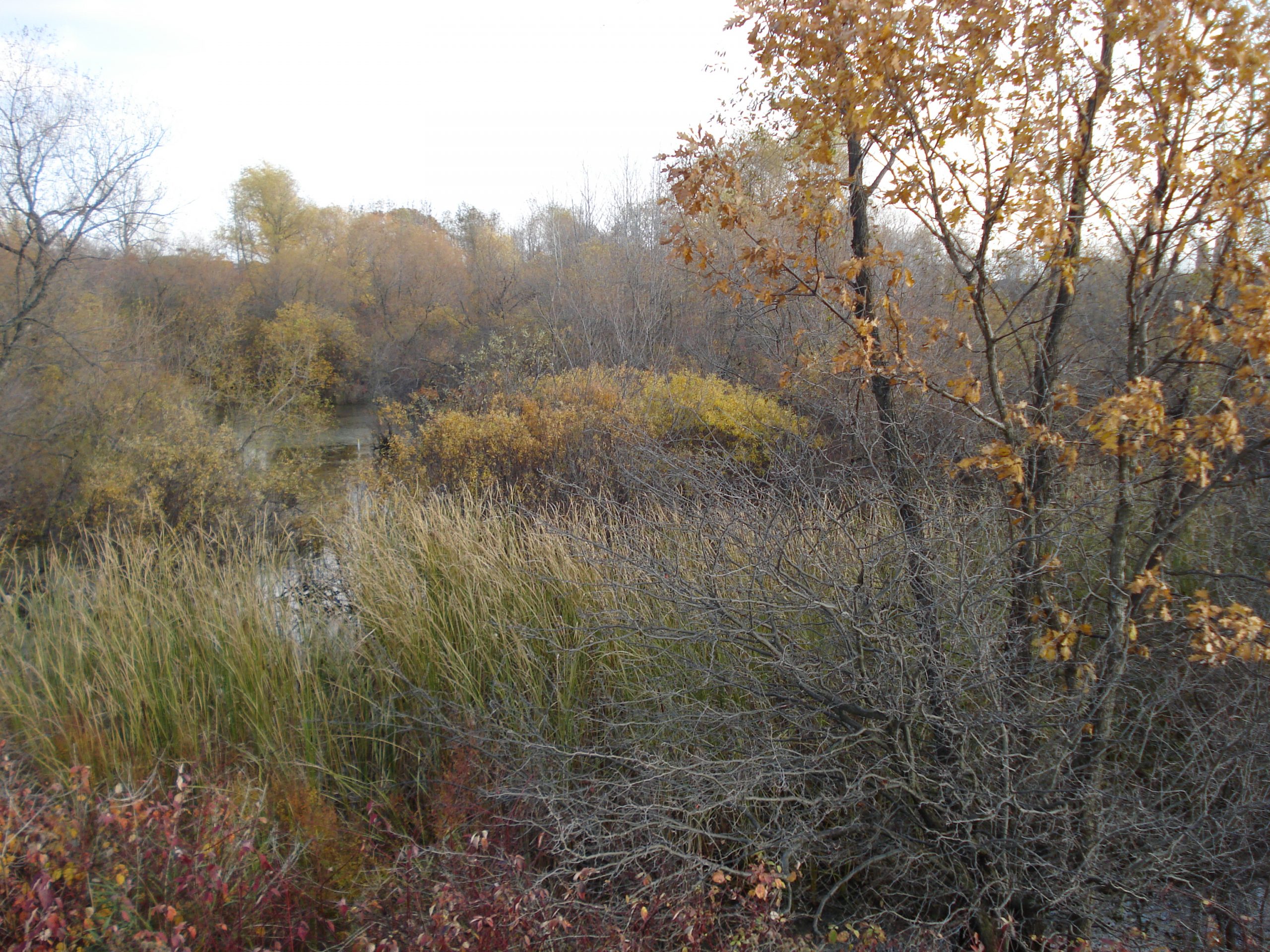 Thinking of Spring has me awaiting the return of bird calls, the budding trees, and the warmer temperatures begging us to get outside. Spring also beckons us to commune with nature and visit many of our wonderful natural areas in the city – places like Rattray Marsh, Riverwood, the Culham Trail, and so many more. One of my favourite gems to visit and see the bursts of colours and wildlife each Spring is the Creditview Wetland. I also think it is one of the hidden gems, albeit hidden in plain sight, in our city. Like many of our natural areas it is fascinating to peel back the layers of time to look into the history of the land.

Creditview Wetland is a naturally occurring wetland system that is located at the northern end of a shallow, tear-shaped depression created some 12,000 years ago. Creditview Wetland is home to many different species, including the Barn Swallow, Meadowlark, Eastern Snapping Turtle, Western Chorus Frog, Monarch butterfly, and more.

Historically, the land on which the Creditview Wetland is located within the traditional territory of the Mississaugas of the Credit, and undoubtedly Indigenous peoples interacted with this area for thousands of years as it would have provided diverse and ample harvests.

The property is within a vast area surrender by the Indigenous Mississauga in Treaty 19, also known as the Ajetance Treaty, in 1818. The land was surveyed in 1819 by Richard Bristol in advance of settlement.

The settlement history of Creditview Wetland connects to two separate historic farm lots. The southern part of the wetlands is located on Lot 1, Concession 3, WHS, while the northern portion is located on Lot 2, Concession 3, WHS. According to the 1877 Atlas of Peel County, the land on which the majority of Creditview Wetland is located was owned to James Anderson. Adjoining this property to the south and east were farms owned by Hiram and James Sibbald and Francis Sibbald. The 1877 map also indicates that a school was located on part of the property of Hiram and James Sibbald. The school was S.S.#16, although known locally as the Creditvale School.

Early schoolteachers were listed as Thomas Sibbald (1873) and Lucy Anderson (1881), making further connections to these two early settling families. The Anderson family was on this property between 1844 and 1920, while the neighbouring Sibbald family owned their farms between 1825 and 1909. Historical aerial photography, dating from 1954 and 1966, corroborate historical maps and show the locations of farm fields, farm buildings and fence lines.

Robert Anderson arrived in historic Mississauga around 1828, possibly from Ireland, and is recorded as renting land from the Sibbald family, before purchasing the property that contains most of the wetland in 1844. Robert’s property passed to his son James in 1847.

James married Mysa Sibbald, and was employed at the Gooderham & Worts Alpha Mills in Streetsville. James also supplied wheat, barley and hops from his farm to the mill. James and Mysa had a least three children: William Hiram (born 1861), Lucy, and Henry.

Mysa died in 1875 and is buried in Streetsville Memorial Cemetery. James himself passed in 1901 at age 92. After James’ will went to probate, his land went to his eldest son, William Hiram Anderson. For reasons that are unclear, James Anderson willed money to the children of John Graydon of Streetsville: Hattie, Mabel, Mysia and Austin. John Graydon was one of Streetsville more prominent citizens, and the possible connection to James Anderson is unknown. William Hiram passed away in 1917, and the farm was willed to his wife, Edna, who in turn sold it to Douglas Steen in 1920.

One story that has been recorded is when their daughter Betsey, at age 17, eloped with George Monger, then 29 years old, much to the disapproval of her father. The story relates that Betsey promised her father that she would not marry. On a Monday morning, she went outside to do the laundry, apparently dressed in her old work clothes. Unknown to her father, underneath she wore her self-made wedding dress, and she slipped away and was married in Streetsville before her father was aware. It ended up being a happy marriage, to which Thomas Sr. eventually approved.

Thomas Sibbald Sr. was a skilled carpenter and cabinet maker. As such, Thomas Sr. became much respected in the community. He was among the founders of the Britannia Wesleyan Methodist (later United) Church. Thomas Sr. passed away in 1858, while his wife Christeen died in 1870. Both are buried in Streetsville Memorial Cemetery.

In his will, Thomas Sr. left the care of the farm and his wife to his eldest son John. John was a carpenter and builder, and amongst many projects he worked on was the new St. Andrew’s Presbyterian Church in Streetsville in 1868. John settled in Streetsville, and the farm passed to his brother Andrew. In 1874 the farm went to their youngest brother, James, and their nephew, Hiram.

An adjacent property also came to be owned by the Sibbald family, having been purchased in 1838. In 1873 this farm was owned by Francis Sibbald, one of Thomas Jr’s sons. Francis was born here in 1841. He married Catherine Gardner of Britannia in 1873 and the couple had 10 children: Harry, Robert, Mary, Ethel, Emily, Florence, Clara, Joseph, William and Ernest. Francis was known for the extensive colonies of bees that he kept, and the honey was harvested both for sale and for the family’s own use. Francis became known in the community as the “honey man”. Francis was among the first registered beekeepers in Ontario.

Francis also established a wagon shop and foundry. The beekeeping trade was passed on to Francis’ son Harry, who inherited the farm and the bees when his father died in 1905. Harry kept Italian bees, and served as president of the Ontario Beekeepers Association. He won prizes in 1932 at an international competition for the quality of his honey.

Throughout its early history, the area around Creditview Wetland was utilized for agriculture, although the wetland itself rendered part of the land unsuitable for farming. This area was planned for suburban development as early as 1948, although it was not until 1977 that development of the surrounding lands began in earnest. After a concerted public effort to raise awareness for the protection of Creditview Wetland, the City of Mississauga purchased the property from developers in 1998 in order to protect this unique natural area for future generations.

Way Back Wednesday: A Tale of Two Queen Streets in Mississauga

There is more than one Queen of Mississauga. I am talking about street names, of course. There is a Queen Street in Streetsville, and a Queen Street in Port Credit. There is also The Queensway, and the Queen Elizabeth Way (QEW), not to mention Queen Federica Drive, amongst others. We will explore some of these…

Way Back Wednesday: The history of Mississauga’s Chi-twaa Tigannes – The Sacred Garden

It was chilly, breezy Sunday in 2014 – November 9, 2014 to be exact – and we were gathered along Mississauga Road, not far from the entrance to the Mississaugua Golf and Country Club, for the opening ceremonies for Chi-twaa Tigannes – the Sacred Garden. I recall having a conversation with one of the audience…

Heritage Mississauga invites you to attend “the Credits 2020” on December 10, 2020 at 7:00 p.m. on our YouTube channel as we honour Heritage Heroes who made significant contributions to their communities during the COVID-19 pandemic. This year we will be hosting a virtual evening gala and invite you to collectively watch the on-line ceremony…

Join us for our Saturday Matinee on August 29, 2020 at 10:00 a.m. on our YouTube channel as we continue to visit our archive of fascinating presentations and lectures. This week we will be featuring the Mary Fix Memorial Lecture: “A Milestone Lecture by Hazel McCallion” which originally took place on November 18, 2003 at…