Vimy Ridge: Battle for “The Pimple”

April 9th marks the 104 anniversary of The Battle of Vimy Ridge. Throughout the month we will be sharing some of the stories of the Battle as well as the historic and heroic figures that fought during this iconic battle in Canadian history.

Our contributions to World War War creates a sense of pride in Canadians and most notably, The Battle of Vimy Ridge, has been a moment of great national pride. At the time there was a great deal of favourable and encouraging coverage in the newspapers reporting on the progress of the war and our troops.

In the newspaper post of April 19, 1917, the reporter mentions the soldiers return from “The Pimple” which was a notorious German stronghold at the northern tip of Vimy Ridge, overlooking the Souchez valley.

For three days the soldiers had fought without the proper rations and very little water.

The Germans had fortified Hill 145 with well-wired trenches and a series of deep dug-outs and the 4th Division were further hampered by fire from the stronghold which resulted in many injured and mortally wounded soldiers.

On April 10, 1917 a relieving brigade cleared the summit of Hill 145 placing the whole of Vimy Ridge in Canadian hands and just two days later, units of the 10th Canadian Brigade successfully stormed the Pimple. 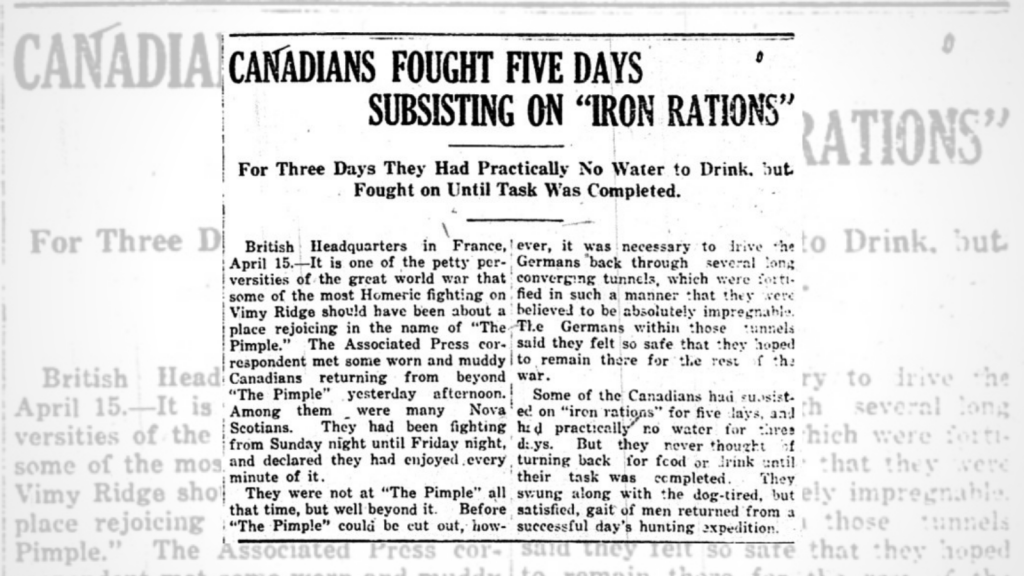 Today in History: The Unknown Soldier

On May 25, 2000, during a ceremony at the Canadian National Vimy Memorial, the Commonwealth War Graves Commission turned over the casket of the “Unknown Soldier of Vimy” to Canada, which was then taken to the Hall of Honour in the Centre Block of the Parliament Buildings in Ottawa. For three days Canadians were in…

Dundas stays. The name of the road has been etched on our landscape for over 200 years, and countless citizens over innumerable generations have interacted and connected with the road, and as a by-product, the name. We also know over the recent past the wider societal discussions over colonial place names, and the modern revaluation…

Save the Date: the Credits 2021 Virtual Celebration

Mark your calendar as Heritage Mississauga’s the Credits are back for a virtual celebration of Mississauga’s Heritage Heroes. This year we will be honouring: Lifetime Achievement Award – Barbara O’Neil Heritage Business Leader Award – Gabriella and Sandor Bank, Sanborg Productions Heritage Champion Awards – Larry Petovello and Mario Pascucci Mississaugas of the Credit Cultural…